Via Jordan: A Frenchman Travels The World Paddling!

While pedalling through 15 different countries on his electric bicycle, French traveller and adventurer Yves fell in love with the hospitality and the culture of the Jordanian people.

Yves, 37, who prefers to go by his first name, is a world traveller who is “addicted to travelling”. He has visited more than 70 countries around the world, making documentary videos of his travels in each country he visits for his YouTube channel. 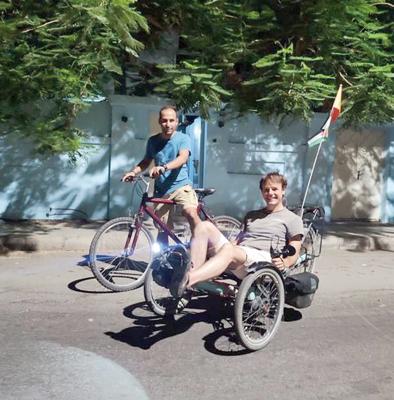 “Fifteen years ago, I was working as an engineer in Paris, but I was very bored with my life, so I started reading the blogs of some world travellers and decided to go for my own world trip. I left for my first journey in 2011, and since then, I have always been a nomad,” he told The Jordan Times in an e-mail interview.

As for the leg down to Cape Town, Yves will cross Egypt, Sudan, Ethiopia, Kenya, Tanzania, Malawi, Mozambique and South Africa. Then, he plans to go back up to Europe, making his way through a number of other countries.

Yves noted that he rode the King’s highway from Amman to Aqaba, and stopped in Karak and Dana. “I did not stop in Petra and Wadi Rum, because I already visited them about 10 years ago,” he said.

“Jordanian people are extremely hospitable, and as soon as you get off the beaten path, it is very surprising how much people are willing to help travellers in Jordan,” Yves continued.

“Jordan has a great history. It is a very interesting country to visit, and because Jordanian people are so friendly, it is a very pleasant and easy country to be in. It is a perfect country for a first travel experience in the Middle East in my opinion,” Yves noted.

Yves also described the food in Jordan as “fantastic”. “I love mansaf so much. I will definitely come back to Jordan. This was my second time here and I still have places to visit, because I have not been in the north. I only went to Jerash,” he added.

“I would really recommend Jordan for people, as it is a very peaceful country, and it is very easy to travel around in the Kingdom,” Yves said.