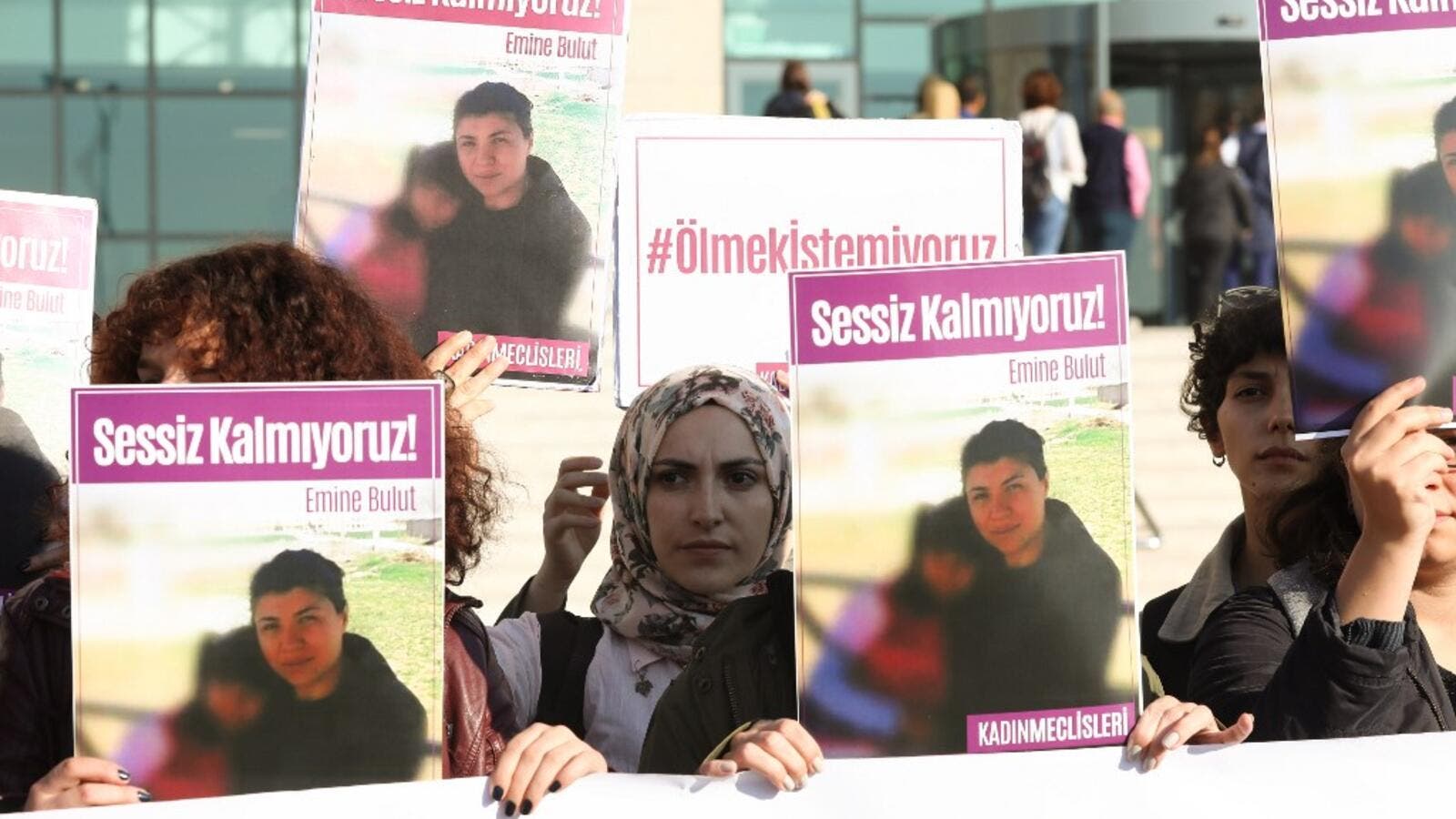 Women hold placards of Emine Bulut, who was killed by her husband, as they gather outside the Kırıkkale court house for the first hearing in the central Anatolian city of Kirikkale on October 9, 2019. (AFP/ File Photo)

A high-profile trial began Wednesday over the murder of a Turkish woman whose stabbing by her ex-husband was caught on video and set off a debate over a hike in femicide.
The killing of 38-year-old Emine Bulut in August sparked outrage across Turkey and reignited the debate over mounting violence against women in the country.

Bulut, who had divorced her husband four years earlier, was stabbed in a cafe in front of her 10-year-old daughter in the central Anatolian city of Kirikkale. She later died in hospital.

A video of the aftermath of the attack was posted online showing Bulut in the cafe, covered in blood, screaming to her daughter: "I don't want to die."

He told police Bulut had insulted him.

He appeared via video link at the courtroom in Kirikkale, near Ankara where proceedings struggled to get underway due to the huge number of journalists and lawyers trying to watch proceedings.

According to the women's rights group We Will Stop Femicide, 121 women were killed in 2011.

Experts say the violence is partly the result of women exercising greater freedoms - not always welcome in conservative sections of Turkish society.

Divorcing or launching criminal complaints against violent partners can also lead to assault and murder in a society where many men still do not see woman as equal.

Activists have criticised the fact that, in some murder cases, Turkish courts have handed down reduced prison sentences for defendants who contend that they were "provoked".

Women's rights groups have called for demonstrations outside the courthouse on Wednesday.

Turkey has ratified the Council of Europe's 2011 Istanbul Convention on preventing domestic violence and has relevant laws covering the scourge.

But activists say the government must be much more proactive in applying the laws and working to protect women.

They point to a lack of shelters for women in need and underscore the importance of addressing the broader issue of gender inequality in Turkish society.

"There needs to be widespread education. The laws must be applied as necessary by judges, prosecutors and by the police force," Nuray Cevirmen of the Human Rights Association in Ankara said.

"Mechanisms to prevent violence against women and the number of refuges must be increased," she added.

Cevirmen criticised suggestions in some court cases that women's actions or clothes contributed to violence against him.