Published May 6th, 2021 - 04:28 GMT
Kim Kardashian (Twitter)
Highlights
The Noel Roberts Trust is an entity that makes real estate purchases and sales for Kardashian and her estranged husband Kanye West.

Kim Kardashian has been named in an international art smuggling row involving an ancient Roman sculpture that was imported from Italy under the celebrity’s name.

Caught: Smugglers Attempt to Ferry 269 Artifacts Out of Egypt

US prosecutors last week called for the statue fragment, which was seized at a port in Los Angeles five years ago, to be returned to Italy as Italian archaeologists say it had been "looted, smuggled and illegally exported."

According to court documents, the importer’s name was listed  as ‘“Kim Kardashian DBA Noel Roberts Trust' in Woodland Hills, California" and it referred to an invoice "for the sale of the defendant statue by Vervoordt to Noel Robert Trust."

"We encourage an investigation and hope that it gets returned to the rightful owners," #KimKardashian's spokesperson said in a statementhttps://t.co/JW1EpRqiwj

The Noel Roberts Trust is an entity that makes real estate purchases and sales for Kardashian and her estranged husband Kanye West.

Kim Kardashian is an American internet sensation who gained international recognition through her reality show, Keeping Up with the Kardashians. The raven-haired star is also a founder of multiple beauty and fashion brands, and was recently named on Forbes' World Billionaire List 2021. She has been married to famous rapper Kanye West since 2014, and together they share four children, though rumours of divorce continue to surround the couple who are said to be living separate lives.

Kardashian's spokesman told the British newspaper, the Daily Mail, that she had no idea that the statue had been bought under her name.

An ancient #Roman #sculpture was imported to #California to decorate #KimKardashian's Los Angeles home in 2016. https://t.co/DH8KFSqJsz

“We believe it may have been purchased using her name without authorisation and because it was never received, she was unaware of the transaction,” the spokesman said.

The statue, referred to as "Fragment of Myron Samian Athena", is believed to date from the early- to mid-period of the Roman Empire, and is of a person's lower half.

The Italian archaeologist who studied the statue declared it "of classical Peplophoros style... which represents a copy of an original Greek sculpture."

The statue raised eyebrows and caught the attention of US Custom officials when it landed at a Los Angeles port. It was officially seized in May 2016 as part of a larger 5.5-ton shipment worth $745,000.

The seizure was based on the suspicion that the shipment could be "protected cultural property from Italy", violating a law that requires proper documentation when importing rare archaeological items. 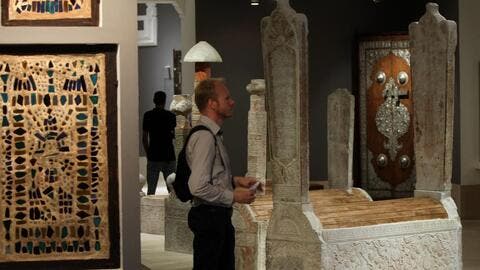 The US and Italy are signatories of an agreement that aims to end the trafficking of pillaged cultural property that requires documentation for imports.

However, according to NBC News, the court documents state the case does not claim any wrongdoing done on the part of Kim Kardashian and that she really was unaware of any irregularities surrounding the affair.