AlBAWABA - As the clock ticks towards 2023, the globe will continue to be locked in La Nina, which has a devastating impact because of its effect on the weather and climate, such as the deadly floods seen in Pakistan, the drought which battered many countries in Europe and the wildfires in California. 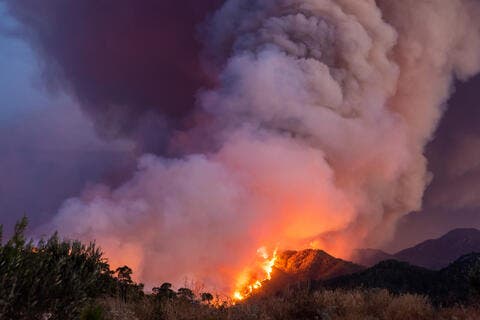 Scientists and The National Oceanic and Atmospheric Administration (NOAA) said in its annual U.S. winter outlook, that they are expecting a "Triple Dip" La Niña pattern, which means that the United States, and the world as whole, will continue to experience the effect of La Nina for the third consecutive year this year.

Pacific ring of fire underwater volcanoes likely major culprit in contributing to unprecedented Warmth surrounding la Nina. Meaning 1) this is not your standard La Nina and 2) The co2 fairy must be controlling the volcanic activity(SARC) pic.twitter.com/mSAJIt9zAU

"Its long duration is a problem," NOAA said.

"For La Niña to span three Northern-hemisphere winters is unusual," declared The Economist in a review of the effect of La Nina, which it said has been recorded just twice before, once in the mid-1970s, and again at the turn of the millennium.

It explained that the large, persistent mass of cold air and high pressure influences wind patterns known as jetstreams across the Pacific and the Indian Ocean. Where jetstreams that blow over land from the ocean are diverted, that land loses moisture and can suffer from drought. The land to which that jetstream is diverted gets more moisture, and can be flooded.

ABC News quoted Richard Seager, Ph.D., a research professor at Lamont-Doherty Earth Observatory of Columbia University, as saying that La Niña occurrences "have a devastating global impact because of its effect on weather and climate."

The weather has caused droughts in North and South America and equatorial eastern Africa. La Niña is also linked to floods in Asia, such as the devastating floods Pakistan has endured since June, Seager reportedly said.

much of warming is caused by La Nina and much of the climate change is caused by an underwater volcano... https://t.co/lPV3LAlRcd bad combination - can't pin it all on AGW.

NOAA forecasts that the expected La Niña winter season, which spans over three months starting in December, in the U.S. won't be atypical, as the northern Plains, Rockies and Pacific Northwest will also experience cooler temperatures; the South will be hotter than normal and the East Coast may be warmer than it usually is during that time of the year, ABC said, quoting Michelle L'Heureux, a climate scientist for NOAA.