Published January 13th, 2021 - 09:48 GMT
German car giant has faced yet more criticism for its latest video shared online. (YouTube/BMW)
Highlights
However, the clip has been accused of alienating older generations, who happen to be BMW's core customers.

German car giant BMW has outraged motorists with a controversial ‘bull***t’ online marketing video that critics say mocks its older core baby-boomer customers and denigrates one of the firm’s most successful flagship limousines - the classic 7-series.

It may also hit sales as motorists take to social media to say they took the insults ‘personally’ and won’t buy another BMW.

One commented: ‘It's like they genuinely HATE people who have one of their older cars. And by 'older', I mean made before 2017.’

The offending video – created to highlight BMW high-tech intelligent ‘iDrive’ system in its new electric iX sports utility vehicle – has angered and mystified consumers who have questioned what the motoring giant is seeking to achieve by undermining its proud heritage by attacking a legendary car which helped cement the company’s very success.

It also appears to stoke up inter-generational conflict, portraying baby-boomers – born from 1946 to 1964 – as an angry, narrow-minded, stick-in the mud generation that doesn’t ‘listen’, condemns modern ideas as ‘bull***t’, and evokes the response: ‘It’s almost impossible to talk to your generation.’

The video has been posted on BMW's website and shared on social media, including Twitter and YouTube, as part of its participation in the high profile global Consumer Electronics Show (CES 2021) currently taking place online.

But it has been dismissed as delivering a crassly condescending and ‘woke’ message that has prompted some to go on social media to say they would not buy another BMW.

It even prompted one owner to ask whether ‘everyone in Munich's marketing department is hopelessly hooked on crack?’ 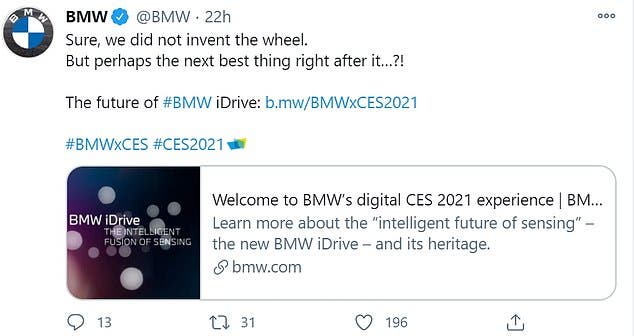 Critics point out that the history of the baby boomer generation – with advances made since the ‘permissive’ 1960s in all areas of social, political, cultural and technological life - show this portrayal could not be farther from the truth.

Some long-standing BMW customers took to social media to proclaim that as a result of such attitudes they would be looking elsewhere to buy their next car, with one saying bluntly: ’We are out.’

In a statement, Munich based BMW said: ‘This film was created by BMW AG to highlight the evolution of iDrive over the past 20 years, as the next generation system will be revealed in the spring.

‘However this clip is intended for certain worldwide markets and is not running in the UK or US.’

The statement however appears to fly in the face of the facts.

It ignores the fact that BMW used on Twitter is avidly read around the world and especially in the UK and USA.

It also poses the question why the car characters involved were speaking English and with American accents.

It is also at odds with the fact that BMW states explicitly on its website and in its posts that the clip is connected directly to the US organised Consumer Electronics Show.

BMW later confirmed that the offending video had been put out on BMW's global Twitter account - @BMW - run by parent company BMW AG in Munich and accessible to users anywhere in the world, including the UK and US.

However it appeared the UK and US arms of BMW were seeking to distance themselves from the move as the video was not issued by the local national Twitter accounts - @BMW_UK and @BMWUSA - intended specifically for customers in these locations.

The row follows an earlier BMW controversy in November when the firm’s marketing gurus posted a tweet in response to an individual's criticism of the iX's styling on YouTube, denigrating the assumed older customers with the jibe ‘OK, boomer’ – prompting a huge backlash.

Commentators questioned the motive behind the tweet, especially given that baby boomers account for around half of BMWs sales – particularly in the key USA market.

At the centre of the new row is an online video which purports to show a fantasy argument between two rival BMWs in one of the company’s car parks – a brand new and recently launched all-electric iX sports utility vehicle and a historic petrol-powered 7-series limousine from 2001 – who face-off bumper to bumper. Both have American accents.

The implication seems to be that the iX represents the present and the future, while the 7-series – and its customer base – should be consigned firmly to the past.

As if to reinforce this point, the voice of the 7-series is portrayed as an elderly, grizzly, grumpy and crotchety man with old-fashioned, fixed and inflexible attitudes who likes only ‘real cars’, repeatedly dismisses modern technology as ‘bull***t’, and describes 21st century electric vehicles as ‘toy cars.’

In sharp contrast, the character of the iX is of a young ‘smarter, better’ and apparently enlightened female voice who refers to the older car as a ‘grandpa’ who has been ‘sniffing at the gas pump for too long’ and says uncompromisingly: ’Your time is over.’

The award-winning BMW 7-series has for decades been the flagship of the BMW range, loved by captains of industry and successful entrepreneurs, and with armoured versions even used by Downing Street and the Metropolitan Police during the Blair years in government and beyond.

But anyone expecting a respectful nod to the past is in for a shock.

At one point the female-voiced iX tells the older male car: ’Of course you don’t understand. It’s almost impossible to talk to your generation. With me, anyone can talk.’

She adds: ‘I’m the intelligent personal assistant. Do you know what I mean? Intelligent.’

The grumpy older generation car can respond only angrily with ‘bull***t’ and ‘marketing bull***t’.

The best he can offer in response is ‘I can drive very fast.’

The new car then issues more jibes such as ‘you just don’t listen’.

The tone and content of the short film has enraged motorists and BMW customers of all ages – who also contend that the classic BMW 7-series is in any case a far more elegant proposition than the brash new iX with its cartoon-like giant grille.

Leading motoring Hilton Holloway, who writes for Autocar, the world’s longest running motoring magazine said bluntly of BMW: ‘The whole 'old people are out of date line' is staggeringly stupid.’

One Twitter user Matt Robinson asked: ‘WHAT is it trying to convey? That BMW's new, hideous products are smug, self-satisfied asshats? That its old cars are all GAMMON?! It's just AWFUL. And yet, it makes me want an E65 760Li.’

He added: ‘It's like they genuinely HATE people who have one of their older cars. And by 'older', I mean made before 2017.I honestly take this video personally. I was a BMW man for YEARS. Not anymore.’

Later he asked whether the reason for the bizarre marketing video was because ‘everyone in Munich's marketing department is hopelessly hooked on crack?'.

Richard Aucock, chairman of the UK’s respected Guild of Motoring Writers, also highlighted BMWs ‘bull***t’ video, describing it as ‘mad’, adding: ‘Hoping some marketing experts can correct me and explain why this is actually ground-breaking genius.’

Another Twitter user, ‘Bahnstormer Tom’ said: ‘What are BMW up to? You don’t dis a 760Li and your heritage like that and get away with it. I’ve owned more BMWs than any other brand and feel like they’ve completely alienated people like me. I will never buy a new BMW. Weird marketing strategy. That said it’s got us talking.’

Simon Charlesworth, in a cutting reference to businessman Gerald Ratner - who saw his business go bust after he dismissed the jewellery his firm sold to gullible customers as ‘crap’ - said: ‘Even Gerald Ratner would find this incredible’.

Another, Colin Isaac, said: ‘One wonders whether they have hired Gerald Ratner as a brand consultant...?’

One critic posted on Twitter the past slogan of BMW - ‘The ultimate driving machine’ - defaced and re-written to read: ’The ultimate WOKE machine’.

Top motor industry PR Philip Hale said: ‘If BMW were a person, you’d be convinced they were in a full-blown mid-life crisis.’

To which motoring pod-caster Alan Bradley responded: ‘If BMW were a person you’d think they’d been spending too much time around The White House.’

Private hire car boss James R. Williams said: ‘My 14 year old 760 Li drives beautifully, and it can get me to the south of France with a few minutes at a petrol pump, the newbie has a long way to go before it can offer that performance.’

Ananda Roy said: ‘After 15 years of owning several BMWs - almost all from new specified to our needs & usually 2/3 cars in the household, we are out. It happened organically. Love the driving dynamics but others have come a long way too, and the interiors & exterior design are plain weird.'