Meet the Masterminds Behind the Barjeel Poetry Prize 2020

Published August 23rd, 2020 - 07:25 GMT
One of the paintings in the competition-image courtesy of the Barjeel Art Foundation
Highlights
Luckily there are great minds who work independently to encourage this type of creation that is not driven by commercial goals like merchants but rather a great sense of giving back to the collective of art and literary community in MENA at large.

In a world stricken by calamities and a region torn by wars and race for supremacy over resources, there are still brave voices who want to honor human expression. Though there’s a great argument that we need to have art for art’s sake, there are so many ripple effects to the amount of empathy a simple stroke of a brush on a canvas can create and the tears and heart beats a few words from a line by Gibran, Wordsworth or Darweesh reflecting on spirit, nature or the home land can provoke. Luckily there are great minds who work independently to encourage this type of creation; that is not driven by commercial goals like merchants but rather a great sense of giving back to the collective art and literary community in MENA at large.

Through the platform of the Barjeel Art Foundation in Sharjah, founder Sulatn Sooud Al-Qassimi brought together three amazing  women creatives working in the Arab region; Hind Shoufani, Marcia Lynx Qualey  and Zeina Hashem Beck to establish the inaugural edition of the Barjeel Poetry Prize with the aim of encouraging young writers to create poems inspired by famous paintings of Arab artists currently on display at the foundation. Wonderful well renowned international authors are also forming the Prize's panel of judges. 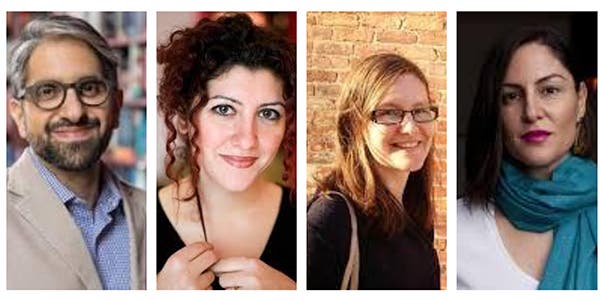 Sultan Sooud Al Qassemi is an Emirati columnist and researcher on social, political and cultural affairs in the Arab Gulf States whose articles have appeared in The Financial Times, The Independent, The Guardian, The Huffington Post, The New York Times, Foreign Policy, Open Democracy, The National, and The Globe and Mail, as well as other notable publications.

Sultan’s tweets became a major news source during the Arab Spring, rivaling the major news networks at the time, until TIME magazine listed him in the “140 Best Twitter Feeds of 2011.” In 2018 Sultan ranked 19th on the “Arabic Thought Leader Index” by the Gottlieb Duttweiler Institute.

Sultan is also the founder of the Barjeel Art Foundation, an independent initiative established in 2010 to contribute to the intellectual development of the art scene in the Arab region by building a prominent and publicly accessible art collection in the United Arab Emirates. In 2018, 100 works from the collection were hosted on a long-term basis at the Sharjah Art Museum.

Sultan is currently conducting research for a book that documents the modern architecture of the city of Sharjah in the United Arab Emirates, and is a Visiting Instructor teaching a course on “Politics of Modern Middle Eastern Art” at Boston College.

His certifications include a 2006 Sharjah Scientific & Cultural Association Recognition Award, as well as the Middle East Leadership Initiative Certificate of Graduation awarded by Aspen Institute in May 2018.

She has channeled all the influences that living in Damascus, Amman, Beirut, NYC and Dubai have woven into her upbringing, values and career, while celebrating her ancestral Palestinian identity at the center of her being.

Born in Sidon, a city built to honor the divine feminine, Hind is a committed storyteller. She anchors the personal/ collective memory of her people in literary and visual expression, in the belief that

“we must reclaim and protect our truth, histories, and dreams- as dispossessed people, Arab women and uncensored artists.”

As a Fulbright scholar, she graduated from the Tisch School of the Arts in New York University, with a Master of Fine Arts in Film Writing/Directing.

She holds a BA in Radio/TV/Film from the school of Communication Arts at the Lebanese American University where she was happy to also teach filmmaking between 2006-2008.

As a bright-eyed scholar at the International Writing Program in Iowa University in 2011, Hind learnt further how to synthesize her multidisciplinary work merging poetry and film.  Hind is deeply gratified to have been a director, producer, editor of both video and written word, shimmery poetry performer, event organizer and host, researcher, English/Arabic translator, bilingual prose writer and university professor since she began her career in 1999.

Marcia Lynx Qualey is a freelance cultural journalist for Al Masry Al Youm English edition, World Literature Today, the Guardian, the Believer, as well as other publications. She also writes a blog, Arabic Literature in English. Qualey holds an M.F.A. in creative writing from the University of Minnesota and, in addition to guiding Arab Lit, presents a fresh view on contemporary Arabic children's literature in a blog dedicated to the Arab world  (ArabKidLitNow!), and runs Bulaq podcast. Her writing also appears in Al Jazeera, The New Republic, Your Middle East, and AGNI, Boston University’s online journal.

Zeina Hashem Beck is a Lebanese poet with a BA and an MA in English Literature from the American University of Beirut. She won the 2016 May Sarton New Hampshire Poetry Prize for her second full-length collection, Louder than Hearts (Bauhan Publishing 2017).

Zeina is also the author of two chapbooks: 3arabi Song (Rattle 2016), selected from 1720 manuscripts as winner of the 2016 Rattle Chapbook Prize, and There Was and How Much There Was (smith|doorstop 2016), chosen by Carol Ann Duffy, who praised her “remarkable gift for storytelling” in this pamphlet rich with women’s voices. Her first book, To Live in Autumn (The Backwaters Press 2014), centered on Beirut, won the 2013 Backwaters Prize and was a runner-up for the 2014 Julie Suk Award.

Zeina’s writing covers a variety of topics: Arab culture, home, exile, family narratives, language, the body, love, and faith. Her poetry often exists at the intersections of the personal & the political, the divine & the profane, the self & the other.

She is interested in poetry that witnesses, resists the orientalist’s gaze, creates small bridges, and insists on loving the broken world, on the power of song even in the dark times, as Brecht put it. Educated in Arabic, English, and French, her poems are sometimes reflections on linguistic and cultural translation. 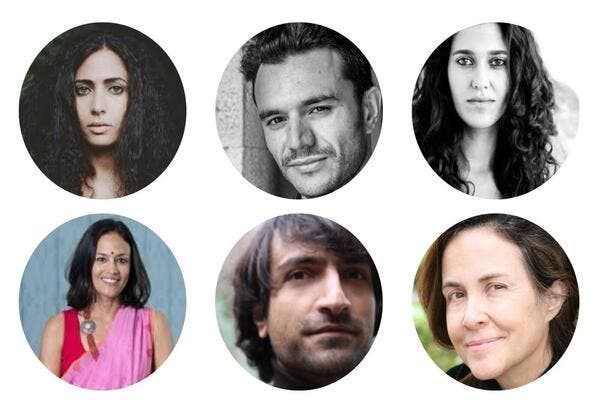 RAYMOND ANTROBUS was born to an English mother and Jamaican father and is raised in Hackney, London. He is the author of The Perseverance. In 2019 he was a recipient of the Ted Hughes Award and won the Sunday Times/University of Warwick Young Writer of the Year Award, and became the first poet to be awarded the Rathbone Folio Prize.

ASMAA AZAIZEH is a poet, essayist, and cultural manager based in Haifa. In 2010 Asmaa received the Debut Writer Award from Al Qattan Foundation for her volume of poetry “Liwa”, (2011, Alahlia). She has two other volumes of poetry: "As The Woman From Lod Bore Me" (2015, Alahlia) and “Don’t believe me if I talk of war” (2019) in Arabic, Dutch, and Swedish. Asmaa has also published a bilingual poetry anthology in German and Arabic “unturned stone” (2017, Alahlia). She has contributed to and participated in various journals, anthologies and poetry festivals around the world. Her poems have been translated into English, German, French, Persian, Swedish, Spanish, Dutch, Montenegrin, Greek, Italian, and Croatian.

Asmaa has worked as an editor of print newspapers, a journalist and a presenter in various TV and radio stations, and as the artistic director of Fattoush book store, and Fattoush gallery in Haifa.

TISHANI DOSHI is an award-winning poet, novelist and dancer. Her most recent books are Girls Are Coming Out of the Woods, shortlisted for the Ted Hughes Poetry Award, and a novel, Small Days and Nights, shortlisted for the RSL Ondaatje Prize and a New York Times Bestsellers Editor’s Choice. A God at the Door (poems), is forthcoming in spring 2021. She is a visiting professor of creative writing at New York University Abu Dhabi, and otherwise, lives on a beach in Tamil Nadu, India.

GOLAN HAJI is a Syrian-Kurdish poet, essayist and translator with a postgraduate degree in pathology. He lives in France. He has published four books of poems in Arabic: He Called Out Within The Darknesses (2004), Someone Sees You as a Monster (2008), Autumn, Here, is Magical and Vast (2013), Scale of Injury (2016). His translations include (among others) books by Mark Strand, Robert Louis Stevenson and Alberto Manguel. He also published Until The War , 2016, a book of prose based on interviews with Syrian women.

Palestinian-American writer NAOMI SHIHAB NYE is the Young People's Poet Laureate of the United States through the Poetry Foundation of Chicago. Editor of the poems for the New York Times magazine, she is on faculty at Texas State University and has written or edited more than 30 books of poems, essays, and fiction. 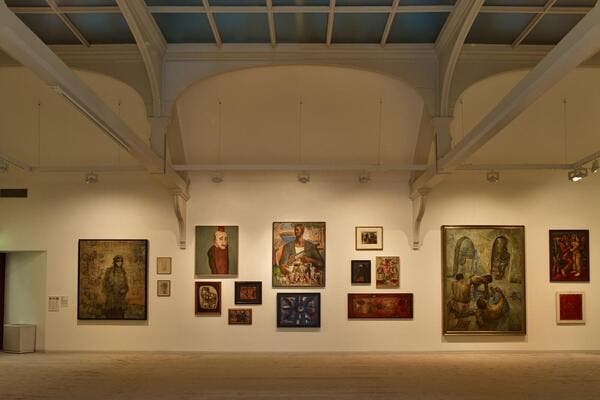 Barjeel Art Foundation is an independent, UAE-based initiative established to manage, preserve and exhibit an extensive collection of Modern and Contemporary Arab Art. The foundation’s guiding principle is to contribute to the intellectual development of the art scene in the Arab region by building a prominent, publicly accessible art collection in the UAE.

Part of this objective involves developing a public platform to foster critical dialogue around contemporary art practices with a focus on artists with Arab heritage internationally. The foundation strives to create an open-ended enquiry that responds to and conveys the nuances inherent to Arab histories beyond borders of culture and geography.

With such wonderful actors of profound vision who can transfer Arab art to the world and bring world art to the Arab region, there is still, indeed, a great chance for a continued cultural dialogue between the East and the West. A dialogue that can open minds and hearts, challenge taboos and stereotypes and open doors of opportunity to be relevant and connected globally despite all political insecurities and rapid developments.  After all "... the real heroes of race and culture would always be the people who stepped out of their own line to make a larger circle" Naomi Shihab Nye.

LGBTQ+ Symbols in Qatar Stir Anger: Is the Country Not Ready for the World Cup?