NASA Helicopter is Flying on Mars!

Published April 19th, 2021 - 11:56 GMT
NASA's miniature helicopter (Twitter)
Highlights
The timing of the helicopter flight is chosen with the weather on Mars in mind. Wind is the big unknown and could jeopardise the mission.

NASA has made history after the Ingenuity Mars helicopter rose from the dusty red surface into the thin air, achieving the first powered, controlled flight on another planet. 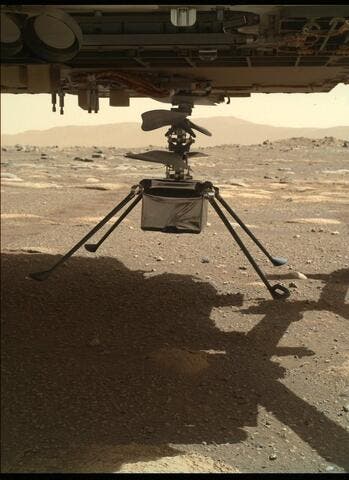 "Altimeter data confirms that Ingenuity has performed the first flight of a powered aircraft on another planet," announced an engineer in the Jet Propulsion Laboratory as the control room cheered on Monday.

The space agency had originally planned the flight for April 11 but postponed it over a software issue that was identified during a planned high-speed test of the aircraft's rotors.

The issue was since resolved, and the 1.8 kg drone is thought to have achieved its feat by around 0730 GMT. But data, however, arrived several hours later at around 1050 GMT.

#NASA's miniature robot helicopter Ingenuity performed a successful takeoff and landing on Mars early on Monday, achieving the first powered, controlled flight by an aircraft over the surface of another planet.

"Each world gets only one first flight," MiMi Aung, the Ingenuity project manager, said before the first attempt.

Flight controllers in California confirmed Ingenuity’s brief hop after receiving data via the Perseverance rover, which stood watch more than 65 metres away. Ingenuity hitched a ride to Mars on Perseverance until their arrival in an ancient river delta in February.

Landmark achievements in science and technology can seem humble by conventional measurements. The Wright Brothers' first controlled flight in the world of a motor-driven airplane, near Kitty Hawk, North Carolina, in 1903 covered just 37 metres in 12 seconds.

A piece of fabric from that plane has been tucked inside Ingenuity in honour of that feat.

The helicopter travelled to Mars attached to the underside of the rover Perseverance, which touched down on the planet on February 18 on a mission to search for signs of extraterrestrial life.

Ingenuity's goal, by contrast, is to demonstrate its technology works, and it won't contribute to Perseverance's science goals.

But it is hoped that Ingenuity can pave the way for future flyers that revolutionise our exploration of celestial bodies because they can reach areas that rovers can't go, and travel much faster.

The timing of the helicopter flight is chosen with the weather on Mars in mind. Wind is the big unknown and could jeopardise the mission.

The flight is challenging because the air on Mars is so thin – less than one percent of the pressure of Earth's atmosphere.

That could have made it much harder to achieve lift, even though it will be partly aided by a gravitational pull that is a third of Earth's.

The helicopter was expected to rise for about six seconds, hover and rotate for about 30 seconds, then go back down.

The flight was autonomous, pre-programmed into the aircraft because of the 15 minutes it takes for signals to travel from Earth to Mars.

Ingenuity itself will analyse its position with respect to the Martian surface.

After its flight, the Ingenuity sent Perseverance technical data on what it has done, and that information will be transmitted back to Earth.

NASA's miniature robot helicopter Ingenuity performed a successful takeoff and landing on Mars early on Monday, achieving the first powered, controlled flight by an aircraft over the surface of another planet, the U.S. space agency said.​ https://t.co/Uh0oZBfTRQ

This includes a black and white photo of the Martian surface that Ingenuity is programmed to snap while flying.

Later, once its batteries are charged up again, Ingenuity will transmit another photo – in colour, of the Martian horizon, taken with a different camera.

But the most spectacular images are from the rover Perseverance, which filmed the flight from a few metres away.

Shortly after this filming, six videos of 2.5 seconds each will be sent to Earth. NASA hopes at least one of them will show the helicopter in flight.

The entire video will be sent over the following few days.

"There will be surprises, and you will be learning about them right at the same time that we will. So let's all get the popcorn," said Elsa Jensen, who oversees the cameras on the rover.

Four outcomes are possible, said Aung before the successful flight: full success, partial success, insufficient or no data coming back, or failure.

Since the flight was a success, NASA plans another no more than four days later. It plans as many as five altogether, each successively more difficult, over the course of a month.

NASA hopes to make the helicopter rise five metres and then move laterally. 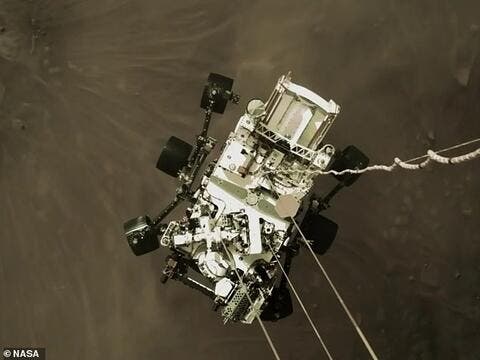 Ingenuity's "lifetime will be determined by how well it lands" each time, said Aung, meaning whether it crashes.

"Once we get to the fourth and fifth flight, we'll have fun," she said. "We are going to take very bold flights and take high risk."