Pause and Enter The Imaginary World of This Kuwaiti Artist

Published May 27th, 2021 - 09:04 GMT
Tarek Al-Ghoussein’s photography exhibition (Twitter)
Highlights
The series is ongoing. I plan to finish it within a year or two. I have been working on this for five years.

Tarek Al-Ghoussein has an ability to immerse himself in projects that require commitment over an extended period of time. 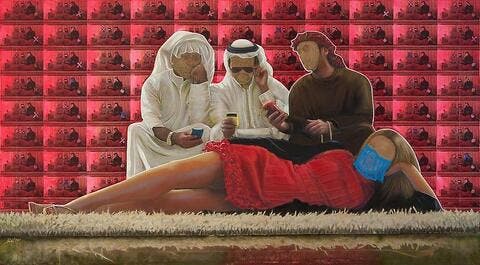 Al-Ghoussein — a Kuwaiti artist of Palestinian origin — is currently on a quest to visit every one of the 215 islands that form the archipelago of Abu Dhabi in the UAE. So far he has visited 30, and the resulting images — recently on show in his exhibition “Odysseus” at Dubai’s Third Line gallery — compel the viewer to pause and enter into his imaginative journey.

He put the same kind of tenacious energy into the series of images he created of the abandoned Al-Sawaher housing estate in Kuwait. In hundreds of visits over three years he entered the deserted apartments and offered a poignant glimpse into the lives of the people who once called the estate home.

Al-Ghoussein is now a professor of visual arts at New York University in Abu Dhabi, but his chosen subject was not always his greatest passion, he explained. “I came to the visual arts gradually, through my passion for literature and classical music, particularly Beethoven,” he said. “My first loves were Franz Kafka, Hermann Hesse and Günter Grasse and, later, Japanese haiku poets such as Matsuo Kinsaku. Clarity and cleanliness of form is something I really appreciate.”

Here, Al-Ghoussein offers some insights into a selection from his extensive body of work.

This is from my “Sawaber” project, named after a modernist housing development (in Kuwait) based on a design by the Canadian architect Arthur Erickson. It’s now gone. There were 33 buildings each with eight apartments — two on each floor. For about three years I went maybe 400 to 500 times and entered each of the apartments where I gathered objects and photographed what was on the walls. What fascinated me about that place was that you had Sunni and Shiite Muslims, Christians, Hindus, Buddhists, Kuwaiti citizens and expats all living together in this community. I brought the framed painting you can see in this work back to photograph in my studio in Abu Dhabi. You also see wallpaper from one of the houses. This whole project is a kind of archiving. It was a wonderful experience.

This project started in 2015.  One day I read an article explaining that the planning council was in the process of naming the 215 islands of Abu Dhabi. That was mind-blowing to me. I had no idea that Abu Dhabi had so many islands. I had just completed the “Sawaber” project, so I was looking for a long-term project and that article triggered my desire and imagination to go out and visit as many of these islands as I could in a spirit of discovery.

This image shows me on the bow of the boat. It was early morning — and I came across a gassar — a mini-island — named Hami Roha which means ‘protector of the soul.’ I thought it was an appropriate image to start the series with. The series is ongoing. I plan to finish it within a year or two. I have been working on this for five years. I hope it will be shorter than the journey of 10 years that Odysseus went on!

This was the first time I ever saw Palestine – you can see it in the background along the Dead Sea. In this series I am wearing the hattah (the Palestinian headscarf also known as the keffiyeh) that — in the West especially — has mistakenly been related to terrorism. This whole series is about challenging Western, and even some Middle Eastern, perceptions that Palestinians are terrorists.

This was part of a project I did when I was asked to represent Kuwait in the Venice Biennale. I was living in Abu Dhabi  – I had just joined NYU –and  there was very little time for me to allocate to it. This was the first project where I did a lot of the research on places before I went. Normally it’s a mixture of visiting and looking and reading, but because I had precious little time I had to come up with an idea before I set out. So, talking to the curator, I saw one potential idea was mapping — and interacting with — the development of Kuwait. I went to several buildings, including the parliament, Kuwait Towers and the World Bank. I used this image because it was one of Kuwait’s earliest sports clubs and as a child I used to play basketball for that particular club.

Tarek Al-Ghoussein is only up for one more day. Stop in to see photographs from his K Files series and Al Sawaber series until tomorrow. pic.twitter.com/xd6taCgysR

I took this image on Saadiyat Island. It kind of references the myth of Iron John – an old fable (written by the Brothers Grimm) about somebody going into the world on a journey of self-discovery. It’s referential to where I am. Much of my work is like an arena for me to interact with or interrupt a given scene. I took this image on Saddiyat Island. I shoot on a tripod and the setting up takes time. It really affects the interaction with the space. It becomes much more of an extension of your vision. It forces me to consider things a little bit more. It’s not about quick intuition. There is intuition involved but setting up becomes much more of a ritual and it slows the pace.

Around 2010, I was commissioned by the Guggenheim Abu Dhabi to produce a series of images on Saadiyat Island and the development of the museum. Because of the delay of the museum I had all these images and I wanted to get them out there. For me a work is not complete until it is out there in the public. That’s also when I discover my relationship to the work. My work is open to interpretation. I don’t really feel comfortable – nor do I wish to — forcing the viewer (to follow) a particular narrative.