Ramadan For The Rohingyas is Another Sad Story

Published April 22nd, 2021 - 03:58 GMT
bout 600k ethnic Rohingya escaped to Bangladesh due to cruelty in Myanmar. (Shutterstock)
Highlights
“Ramadan in Bangladesh is just a religious commitment for us with no celebration.”

Painfully estranged from their homeland, the holy month stirs up memories of harmony and festivity for one of the world’s most persecuted peoples. 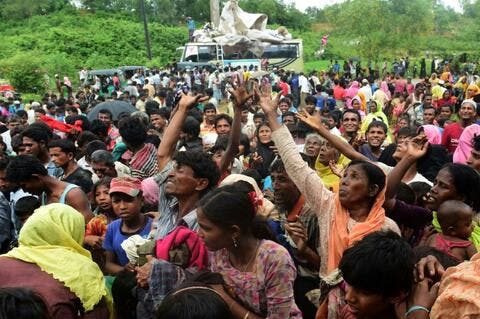 Maryam Begum, 35, was busy passing her time feeding her two-year-old child on the eve of iftar, the end of the daily fast during the Muslim holy month of Ramadan. Begum’s congested makeshift tent, made of tarpaulin sheets in the Cox Bazaar camp in southern Bangladesh, is located on the slope of a hill from where the crimson glow of the setting sun is clearly visible.

It's the same story for most of the shelters for Rohingyas in the world’s largest refugee camp in the South Asian delta state. But the persecuted community are not at all charmed by the natural beauty of their Bangladeshi surroundings. They are preoccupied with suffocating memories of killings, arson, rape and torture.

‘We get the real taste of Ramadan and Eid when we return to the motherland’: Rohingyas long to return to Myanmar despite the harrowing trauma they’ve endured https://t.co/nNKOTrT8KY

Ramadan, however, is always different for them. They miss the sweet memories of the past in their home in west Myanmar’s Rakhine state, where they performed religious rituals with great festivity. Though the Rohingyas had to lead a tense life in Rakhine since the enactment of the controversial 1982 Citizenship Act by Myanmar's military junta, they made life joyous by sharing Ramadan with each other.

After fleeing the inhuman clampdown three years back, Rohingyas have been living in Bangladeshi camps, leaving behind many of their loved ones in Rakhine who were brutally murdered by the country’s military [Tatmadaw].

“My husband and father-in-law were farmers and they had enough cultivable land. We had a well-off life. But Burmese [Myanmar] military killed my father-in-law like a hunter shoots a bird and burnt down our house. After a painful journey of a week through forests and water, I along with my husband and two kids reached Bangladesh. Now I am the mother of four kids and we six family members are struggling for survival in a small tent,” Begum said.

Referring to Ramadan in Bangladesh’s camps as a nostalgic memory of the past, Begum, while arranging iftar for some family members, said: “My husband and father-in-law used to go back home before iftar with different delicious foods from nearby markets. We used to take iftar together along with neighbors and close relatives. Many of them were killed.”

“Ramadan in Bangladesh is just a religious commitment for us with no celebration.”

Dreaming of Ramadan in the motherland

Amid all their tribulations the Rohingya still dream to return to Myanmar, with their rights and dignity intact, to celebrate Ramadan.

Dolu Bibi, 65, said she buried her husband in Bangladesh and plans to take her final resting place next to her husband’s grave. Like many others, Bibi also took shelter in Bangladesh during the 2017 exodus, but her elderly husband died days after their arrival, unable to cope with the hardships at home and the hazardous journey to the neighbouring country.

Bibi has six children and believes that they will return to their homeland and lead a better life there. “InshaAllah [God willing] in near future my children will celebrate Ramadan in Myanmar as independent citizens of the country.”

Since the 1982 citizenship law was passed, Myanmar's authorities have treated Rohingya Muslims as illegal habitants or foreign Bengalis - despite hundreds years of ancestry and continuous presence in Arakan [currently Rakhine] state. Myanmar's military has launched several operations over the years, the latest being the crackdown in August 2017.

According to a study titled 'Forced Migration of Rohingya: The Untold Experience' conducted by a consortium of researchers from Australia, Bangladesh, Canada, Norway and the Philippines, during the 2017 crackdown the Myanmar army and extremist Buddhists; killed over 24,000 Rohingyas; 18,000 Rohingya women and girls were raped; 41,192 suffered bullet wounds; 34,436 were burned and 114,872 beaten by military forces. An estimated 115,026 houses were burned and a further 113,282 were vandalised.

Despite all that trauma, many displaced Rohingyas still dream of returning one day.

With a smile on her face, Bibi gossiped with her grandchildren in front of her tent and told them about their beautiful past. 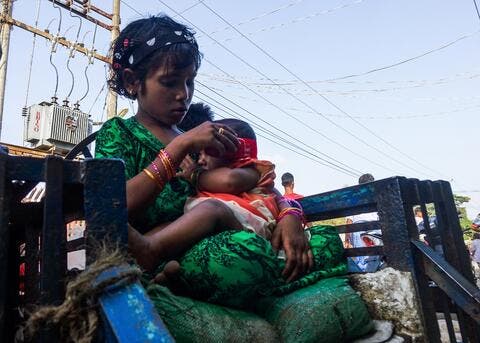 “We get the real taste of Ramadan and Eid when we return to the motherland,” Solim Ullah said while holding his kid on his lap.

Mehmet Ismail, 25, from one of the camps, asked: “How can I compare those lovely days of Ramadan in my own country with those in Bangladesh’s cramped camps as an outsider without refugee status?”