Published April 26th, 2021 - 04:54 GMT
by Waleed MARHOUM (Instagram)
Highlights
His calligraphy, meanwhile, is simple, but each brush stroke is influenced by the magnificence of the colors, the tones and the softness of the images they adorn.

They say that a picture is worth a thousand words, and that written words can drive behavior. 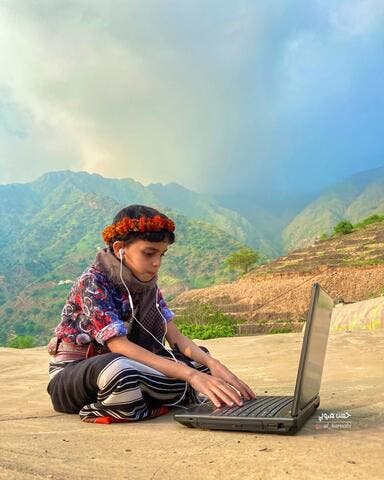 Waleed Almarhoum, a seasoned Saudi photographer and self-described “novice calligrapher” has taken both messages to heart, and has set out to combine the two mediums in an exhibit titled “Al-Khulasah.”

Opening at Riyadh’s prestigious Naila Art Gallery, “Al-Khulasah” showcases the true power behind the written word accompanied by some of his famed natural landscape photos.

From the golden deserts of the Arabian Peninsula to the thick misty forests of Europe and the lush green jungles of the Philippines, Almarhoum’s photographs capture the light in a special way that mixes and matches lines, to create abstract visions and let the viewer’s imagination run wild, forging new shapes and figures along the way.

“‘Al-Khulasah’ refers back to a poem my father read to me, and I chose three verses that spoke to me,” Almarhoum told Arab News. “They explain the purpose of the exhibit and the connotations the images contain.”

Almarhoum grew up practicing calligraphy from a young age, later branching out into other mediums, specifically photography, through which he would often focus on light and shadows, and how they coexist harmoniously in nature.

His calligraphy, meanwhile, is simple, but each brush stroke is influenced by the magnificence of the colors, the tones and the softness of the images they adorn.

“With the right angle and time, sometimes the sun’s rays reflecting off the soft sands can give the illusion of gold. The image is as soft as silk and I mimicked the soft strokes found in (the) image to repeatedly draw the word ‘harir’ (Arabic for silk), to reflect on the similar movement of the sand with similar colors as well,” he said.