Is South Korea's Delta Plus a Brand New Variant?

The COVID-19 delta plus variant, detected in two South Korean cases on Tuesday, is “not new and has been detected in India for months,” a Saudi infectious disease expert has said. 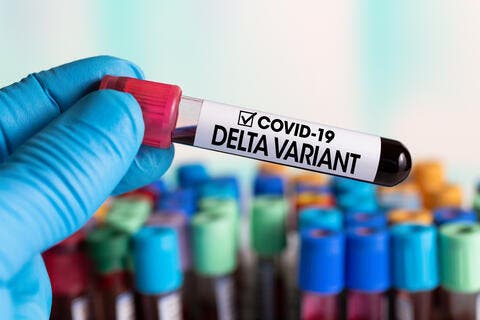 “Delta plus was previously detected in the EU since March and in India for months,” said Ahmed Al-Hakawi, who is also a hospital epidemiologist in Riyadh.

South Korea reported its first two cases of the variant earlier this week, with overall COVID-19 cases in the country rising sharply.

Al-Hakawi said that the new form of COVID-19 “differs slightly from the delta variant through the presence of the K417N mutation that was previously detected in the beta mutant.”

He added that the delta plus designation has yet to be approved by medical authorities, and that there is no evidence to suggest that is is more virulent than the original delta variant.

Meanwhile, a total of 102 people in the Makkah region have been arrested for failing to adhere to quarantine regulations after testing positive for COVID-19.

The media spokesman for local police said that preliminary legal procedures were taken against the individuals and their cases were referred to the relevant authorities.

Those breaking the Kingdom’s COVID-19 regulations could face fines of up to SR200,000 ($53,000), a maximum of two years in prison, or both. The penalty is doubled for repeated violations.

Non-Saudis found to have breached quarantine rules run the risk of being deported and permanently banned from the country.

Saudi Arabia on Thursday reported 13 more COVID-19-related deaths, bringing the Kingdom’s death toll over the course of the pandemic to 8,297.

Of the newly recorded cases, 189 were in the Makkah region, 177 in the Riyadh region, 162 in the Eastern Province and 55 in Madinah region.

I thought delta plus was an airline rewards program and now y’all telling me it’s another weapon formed against me ? 😭😭😭😭

In addition, the Saudi Ministry of Health said that 1,055 patients had recovered from the disease, increasing the total number of recoveries in the Kingdom to 512,373.

The region with the highest number of recoveries was Riyadh with 262. It was followed by the Eastern Province with 194 and Makkah with 151.

Testing hubs and treatment centers set up throughout the country have dealt with hundreds of thousands of people since the outbreak of the COVID-19 pandemic.

Among them, Taakad (make sure) centers provide COVID-19 testing for those who show no or only mild symptoms or believe they have come into contact with an infected individual, while Tetamman (rest assured) clinics offer treatment and advice to those with virus symptoms such as fever, loss of taste and smell, and breathing difficulties.

Appointments for either service can be made via the ministry’s Sehhaty app.