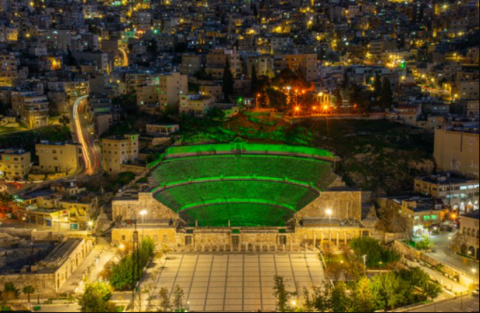 Amanda Snow, whose son, Oliver, attends Sugar Grove Elementary School in Center Grove, said her son went to school decked out in green for St. Patrick's Day, and his festive attire caused some errors in the proof photos that came back late last week.

"He had a dark green shirt on," Snow told WTHR-TV. "The top of his hoodie is green, so he turned into the fence here. He had lime green shorts on, so I guess the darker the shirt the more transparent the background comes through. And he had a green mohawk, but that is completely gone."

Snow said she soon discovered she wasn't the only one to get unintentionally hilarious proofs from Inter-State Studio.

"I posted in a local mom's group on Facebook like, 'Does anybody else have funny pictures from St. Patrick's Day?' And so many people do. So many good ones," Snow said.

Parents shared photos of their children's torsos disappearing into backgrounds due to green clothing.

"Honestly, I just couldn't wait to see other parents' pictures and it ended up being just a hilarious fiasco, just because it's just so funny," Snow said.

Inter-State Photography said the photos ordered by parents will not bear the same mistakes as the proofs.

"We try to get digital proofs in front of people quickly, so this is an example of seeing it before it goes through that post-production process. Typically, this is caught in an earlier, automated stage. This image is not the final product because it gets fixed in post-production," the company said in a statement to FOX TV Stations. "We appreciate the opportunity to respond to this specific instance -- everyone has had such a good sense of humor about this!"

School officials said a more formal school picture day had been held in the fall, and the spring picture day had to be delayed twice before ending up on St. Patrick's Day.

"I might reach out to the company and see if I can get the unedited ones, because honestly, they've brought me so much joy and laughter over the last day," Snow said.