Published June 10th, 2021 - 07:06 GMT
girl playing on shaman frame drum (Shutterstock)
Highlights
Suha Mohammad Ali wanted to prove that women are capable of performing in bands based on percussion instruments. And indeed she has succeeded.

Whenever Suha Mohammad Ali visits the Temple of Dandara in the governorate of Qena in southern Egypt, she is drawn to a huge mural of ancient Egyptians beating tambourines together, which shows that the playing of percussion instruments, nowadays generally by men, was an activity in which women had something to say. 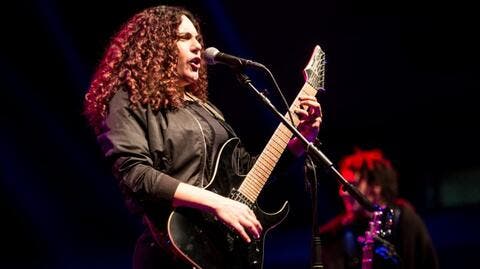 The Dandara mural is not the only evidence of the connection between women and the tabla or the tambourine (the most famous percussion instrument). Popular practice and folk art tradition in Egypt widely reflect the same trend.

What Suha has done since 2019, by creating a women-led percussion band under the name “Tabla Al Sitt” (Lady’s Tamourine), is not a feminist incursion into a male domain, but rather a return to the roots of drumming in Egypt.

The band, set up by Suha and five other young women, quickly won audiences and became popular after just a few concerts.

But the pandemic, which spread just months after the band began performing, blocked further public performances.

However, at the beginning of June, Tabla Al Sitt returned to perform before a live audience in a heavily-attended concert at the Spanish Cultural Centre.

Suha Mohammad Ali told The Arab Weekly that she had wavered between several artistic choices.

She studied folk art for some time with the famous Reda Troupe. She had tried acting, then studied rhythm at the Institute of Arabic Music with Saeed Al-Artest and worked with his band, before she thought about establishing her own band made up of women.

Suha Mohammad Ali wanted to prove that women are capable of performing in bands based on percussion instruments. And indeed she has succeeded.

Her ambition was boosted by the outstanding performance of the Cairo Philharmonic Orchestra’s female players during the ceremony transferring the royal mummies last April. At that particular performance, woman musician Radwa Al-Behairi, the lead percussionist leader drew plaudits for her majestic posture and impeccable artistic performance.

Suha Muhammad Ali added, “I was following the concert with great joy. I saw my message embodied on the screen by female percussionists and that boosted my determination to continue on the path that where I was starting.”

Whenever Suha Mohammad Ali visits the Temple of Dandara in the governorate of Qena in southern Egypt, she is drawn to a huge mural of ancient Egyptians beating tambourines together. https://t.co/jDWklGPRnl

The programme of “Tabla Al Sitt” band during its latest concert included Al-Sira Al-Hilalia folk music, songs from the Reda band repertoire and a range of folkloric pieces. A pop song by the late singer and actress Suad Hosni’s titled “Bring Me Chocolate” was played with different arrangements.

On the stage, the six girls, Suha, Gina, Rita, Riham, Menna and Duaa sat in line, while to their left were wind instrumentalists, Raafat on the koala and Sayed on the oboe.

Usually the show begins with a piece rotating the tabla, flute and oboe which creates a melancholy atmosphere before the percussion instruments come in with their usual clamour that spreads joy and merriment, as if the theatre was a mirror of life in which grief and pleasure alternate.

What is remarkable about the “Tabla Al-Sitt” troupe is its mix of vitality and feminine spirit, its combination of folk, rhythm and harmony against the background sound of ululating as if you travelled back in time to the forties, fifties and sixties of the last century.

Suha is now looking to tour Egypt with her band and take part in local and international festivals.

But so far, the band is still in its early stages, financially self-reliant but not making a profit. Its concerts are held in venues such as the German Goethe Institute or the Spanish Cultural Centre without tickets being sold to the public.

It is very recommendable for the people who love visiting Luxor to take the chance to visit the famous Temple of Hathor at Dendera or ”Dandara Temple” as the local people call it. #highlight #mustvisit #dandara #AlbaraaTravel pic.twitter.com/X8m5MoWR8H

Suha Mohammad Ali chose the members of her band from among her colleagues at the Institute of Music, recruiting those who showed the same passion and commitment to the project. 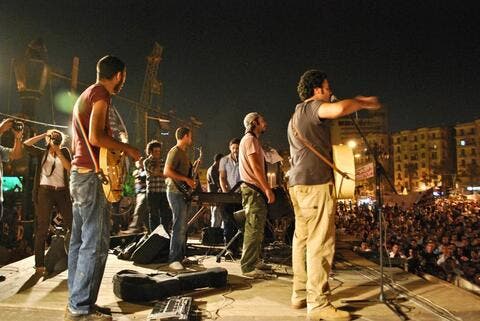 One of them, Reham, is an architect and award-winning actress as well as being a singer in the “Al-Oula Baladi” band, which specialised in singing progressive songs of the blind oud player and singer Sheikh Imam. She  then moved to join “Tabla Al Sitt” and its unique line-up.

Reham told The Arab Weekly that each experience had its advantages, but “Tabla Al-Sitt”  stands out with its desire to revive heritage and prove the ability of women to play percussion instruments and more.