Take a Walk in Historic Cairo You Will be Amazed!

Published May 19th, 2021 - 09:13 GMT
Historic Cairo (Shutterstock)
Highlights
El-Hattaba was also known for being the residence of Hattab workers (fire wood cutters) that used to provide wood and fuel supplies for the citadel.

In collaboration with Megawra, Ahram Online launches a series of walks in Historic Cairo to track down the intangible heritage of El-Qahera, the Conqueror, and attempt to safeguard what’s left of it. 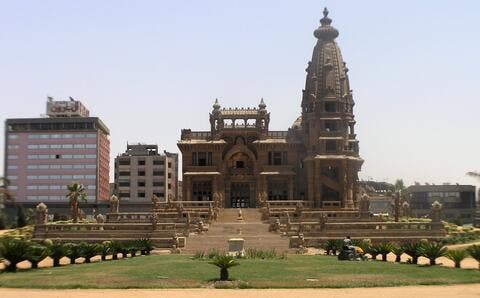 The first walk started alongside Megawra’s founder, architectural historian May El-Ibrashy, who spent about 10 years working extensively on El-Khalifa district in Sayeda Zeinab, El-Hattaba, and El-Imam El-Shafei district. El-Ibrashy’s participatory conservation initiative gave her a valuable insight into the intangible heritage of these districts located in the heart of Old Cairo.

The first trail of Historic Cairo took us to El-Hattaba district. Tucked right behind Saladin Citadel, this small neighbourhood witnessed an influential segment in Egypt’s history.

This is the street where the Mahmal passes. This is an annual procession from Egypt to Saudi Arabia, where Egypt hands the Keswa, or the new cover of the Kaaba carried on camelback, to the kingdom.

During the Ottoman era, the procession’s caravan would pass by El-Hattaba district that housed several Keswa workshops. El-Hattaba also offered water reservoirs for Hajj and Mahmal caravans that would rest through the night in open areas near the cemeteries.

“The street cross-cuts into Ara Midan district, which was previously a large square and the prison built at the beginning of the street was named after the district," El-Ibrashy told Ahram Online. "Ara Midan was also the square where military training used to take place during the Ottoman era, and not far from it was the market of donkeys and mules, and military equestrian trainings."

South of the citadel

“The citadel was a different place back then. It was like a little town that housed the ruling family, the courtiers, their families, servants, cooks, mosque, and Market. The southern part of the citadel included facilities that catered for all of the above," she added.

Government buildings were constructed just outside the walls of the citadel, in El-Hattaba, including Dar El-Wathaeq (the National Library and Archive.)

El-Hattaba was also known for being the residence of Hattab workers (fire wood cutters) that used to provide wood and fuel supplies for the citadel.

“During the Mamluk era, El-Hattaba was divided into two main areas. The upper area included Dar El-Adl (the House of Justice), Dar El-Diafa (the House of Hospitality), as well as El-Tabla Khana (The Marshall Drum Beat place). The lower area contained several religious monuments and the Saharig (reservoirs) area, which provided the main water supplies for the district as well as the Hajj caravans. Since the citadel was a vast place, its main water supplies came directly from the Nile via Magra Al-Oyoun. Much of the water was saved in the reservoirs built in El-Hattaba district," El-Ibrashy said.

Egypt is just months away from reopening a historic palace in Cairo after a $6 million restoration project https://t.co/moh6mudvGw pic.twitter.com/EnkVVWOGnh

This is a Mamluk water dispensary for animals, located not far from a place called El-Manakh, where camels of the travelling caravans, especially before the hajj season, used to rest.

Built around the 14th century, the Khanqah (a building for spiritual Sufi confinement) was built by Sufi icon Nezam El-Din El-Asfahani. However, during the French expedition, Napoleon used it as a citadel and built on top of it.

The Mausoleum of Younis El-Dawadar

It was built at the end of the 13th century and beginning of the 14th century. It belongs to the Mamluk prince Younis El-Dawadar, meaning the secretary or head of the administrative work. It is distinguished for its unique, high minaret.

“Egyptians wanted to be buried either next to a religious figure, such as Al-Sayeda Nafisa, or the ruling family. Consequently, one will find the arafa (cemeteries) of commoners as well as royal figures visible from the citadel," said El-Ibrashy.

The Saharig (reservoirs) funerary complex comprised a school and dated to the 15th century Mamluk era. Beneath the complex is a vast water reservoir where drinking water supplies for the district were kept safe and clean.

The area is the centre for two crafts, one is Aqadeen (a special kind of embroidery that requires a spacious area to spread its thread.) The other is the shell handicraft, especially on wooden material. This also needs a lot of open air space for the glazing and fumes resulting from the process.

“This is the Shebeta shell workshop, one of the biggest and oldest workshop in the area," explained Mustafa Said, the main worker in the workshop as he was adding the final touches to his latest masterpiece.

El-Hattaba Enwani (my address), read the graffiti that shades the district’s only public garden. Sponsored by Pepsi, Megawra managed to create it in 10 to 15 days.

On the small street named Darb El-Saharig (the street of reservoirs) lies the renovated El-Shourafa Mausoleum which is also a Mamluk relic that was buried under tons of garbage. “It took us 10 days to remove the garbage from the site," remembered El-Ibrashy. However, the structure and design of the building that is closely located near the wall of the citadel reveals it could have been used as a means of defence as well.

“This is where we want to set up the handicrafts and designs community centre, in order to be part of the touristic trail of El-Hattaba.

There are some 500 households and 80 buildings, 20 percent of which are in a very bad condition as a result of a government decree in the 1970s. 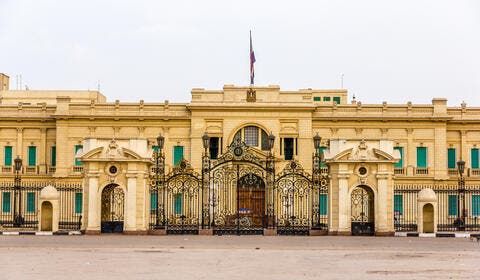 Historic Abdeen Palace in Cairo Opens to The Public

Back in the seventies, the government issued a decree by which El-Hattaba was marked as a clear area to make the citadel more visible. The decree prohibits residents from restoring their houses until today.

Being part of Historic Cairo, we are all hoping that the government will resolve this situation soon.