Published August 6th, 2021 - 06:20 GMT
On 31 July, we'll be having the first guided exhibition tour of Made in Tashkeel 2021. (Instagram)
Highlights
The UAE art facility’s summer exhibition brings together a wide range of artists and styles 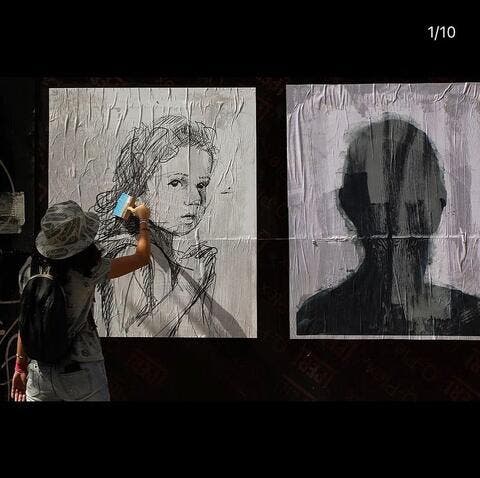 Emirati artist Abdulla Lutfi is on the autism spectrum and “sees the world in a unique, nonconventional way,” according to Tashkeel’s catalogue for the exhibition.

“Abdulla’s distinct black-and-white drawings of the UAE skylines and landscape usually feature an exaggerated humorous glimpse of everyday Emirati life,” it continues. This 2019 work captures one of Dubai’s older landmarks — the creek that made it a trade hub long before the discovery of oil in the Emirates. Lutfi works from Tashkeel’s “Next Chapter” studio in the city’s creekside Al-Fahidi neighborhood — a space he shares with artists including Asma Baker, who is also on the autism spectrum.

This acrylic and pen drawing on cardboard is part of a series that Baker began eight years ago after the death of her father. “I was in deep depression,” she explains. “I started to write stories about things that are right and wrong. The Heart People in the drawings would explain what the story is trying to say. It helped me remember that we are never alone, even when we feel we are. Three years ago, I realized that the Heart People are memories of the tales told to me by my dad and grandmother. I carry these special stories in my heart.”

The Dubai-based artist is pushing the boundaries of calligraphy, incorporating Augmented Reality (AR) into his work, as with this 2021 work. “I am always seeking ways to implement calligraphy in a creative manner,” he says in the catalogue. “I integrate AR with my calligraphy work using the Artvive App. The colors and animation used in the AR platform reflect laughter and jot.”

Lebanese artist Rima Moukahal spent much of her life in the corporate world, before deciding “to return to her passion” having given up her dream of becoming an artist when the Lebanese civil war began in 1975, shortly after she had won a trip to Italy to study drawing. Now, she is once again honing her artistic skills with abstract expressionist works such as “Truth Underneath,” which she explains “shows the cycle of a woman’s life.” “Filled with … determination, her accomplishments shine bright. Yet … below the sheen of success sits a hidden truth of sadness and silent suffering.”

‘Dome of the Rock’

“Like the rest of Palestine, the Dome of the Rock is disappearing as it becomes dispossessed and disconnected from the hands and hearts of those who consider it sacred,” the UAE-based Palestinian-American artist says in the exhibition catalogue. “While the original objective of this print was to help me reconnect with my roots, recent events have led the series to take on new meanings of memory, reclamation and resistance.”

The Yemeni photographer created this mixed-media work in under 20 minutes during Eid Al-Fitr last year. It was a task she set herself while working on a series “focusing on depression and mania” and she eschewed her usual methodical approach to “do something with this image” of her daughters, Sarah and Lama. “This exercise made me feel like a child again. I had forgotten to relish the sheer pleasure of creating. It felt so good to give myself permission to play.”

This is one of a series of three works the Syrian artist is displaying at “Made in Tashkeel.” “We often keep items around our house that are valuable to us, whether they remind us of our loved ones or take us back in time to a beautiful place,” she says in the catalogue. “I have painted the things that mean a lot to me in my own vision.” 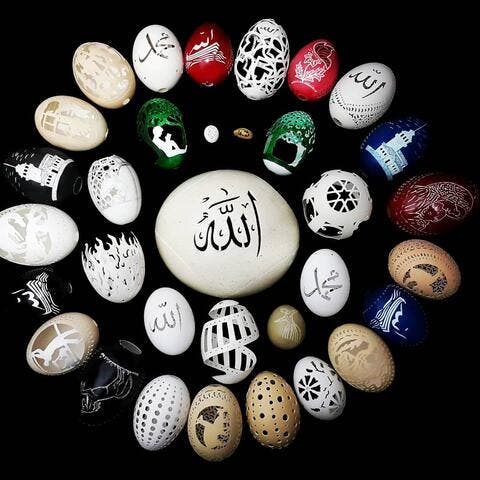 The Puerto-Rican artist has lived in Dubai for more than two decades and “her focus has been on documenting the infinite beauty of the indigenous trees in the region.” This 2021 work is taken from a series of drawings and hand silk-screened prints that Miller began in 2018 “to illuminate the vulnerability posed by global warming,” the catalogue explains. “Protecting and preserving trees is integral to our survival and speaks to Solimar’s creative process.”