Published May 5th, 2021 - 11:45 GMT
In this file photo illustration, a phone screen displays a Facebook logo with the official portrait of former US President Donald Trump on the background, on May 4, 2021, in Arlington, Virginia. Facebook's independent oversight board on May 5, 2021 upheld the platform's ban on former US president Donald Trump but called for a further review of the penalty within six months. The board, whose decisions are binding on the leading social network, said Trump "created an environment where a serious risk of violence was possible" with his comments regarding the January 6 rampage by his supporters at the US Capitol. Olivier DOULIERY / AFP
Highlights
'However, it was not appropriate for Facebook to impose an ‘indefinite’ suspension.

Facebook's Oversight Board has temporarily upheld the ban on Trump's accounts but refused to make a final call on it, instead throwing the controversial decision back to Mark Zuckerberg and giving him another six months to ponder it. 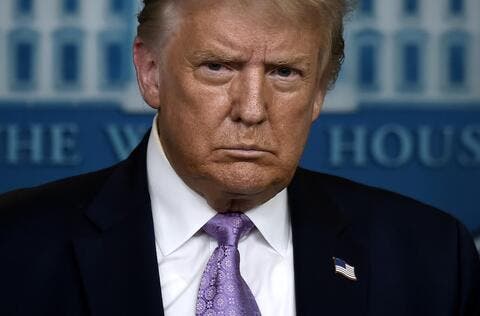 The board announced its findings on Wednesday, almost exactly four months since Trump was banned in response to the Capitol riot. It was an unprecedented move of censorship on a world leader and sparked a global debate over how much control social media and big tech should have over free speech.

The oversight board - whose sole purpose is to make sure Facebook does not have full autonomy over the site - took on the case and has spent months deliberating it amid fervent anticipation.

All of its 20 left-leaning members are paid six figures for doing approximately 15 hours of work a week, costing Facebook more than $2million a year.

But in their decision on Wednesday, the five deciding board members (who are not named) refused to rule on whether Trump should be permanently kept off the site or allowed back.

They justified their refusal by criticizing Facebook for not giving Trump a timeframe for how long the ban would last.

'In applying a vague, standardless penalty and then referring this case to the Board to resolve, Facebook seeks to avoid its responsibilities. The Board declines Facebook’s request and insists that Facebook apply and justify a defined penalty,' they said.

Wednesday's decision not only tosses the decision back to Facebook CEO Mark Zuckerberg, but it also gives him another six months to consider what to do.

In the meantime, the former president remains offline and unable to communicate with his tens of millions of social media supporters.

The board also revealed that in its investigation of the issue, Facebook refused to answer questions about whether it played a role in the riot, and whether it continued to profit from ads that targeted Trump's followers after he'd been banned.

In response to the decision, Facebook's VP of Global Affairs, former deputy Prime Minister Nick Clegg, said: 'We thank the oversight board for the care and attention they gave this case.

'We will now consider the board’s guidance and develop a response that is clear and proportionate.

Republicans called it a 'sad day for America', 'disgraceful' and renewed calls to break up the Silicon Valley giant.

'Disgraceful. For every liberal celebrating Trump's social media ban, if the Big Tech oligarchs can muzzle the former President, what's stopping them from silencing you?' Texas Sen. Ted Cruz tweeted.

Mark Meadows, Trump's former White House Chief of Staff, said in an interview with FOX: 'It's a sad day for America. It's a sad day for Facebook, 'cuz I can tell you, a number of members of Congress are now looking at, do they break up Facebook?

'Do they make sure that they don't have a monopoly?

'There are two different standards: One for Donald Trump and one for another number of people on their sites who are suggesting things more nefarious than what the President has been accused of.'

In its 11,000-word ruling, the board said that Trump 'severely violated' Facebook's policies with his January 6 posts where he told rioters: 'We love you, you're very special.'

It also said he 'created an environment where a serious risk of violence was possible' by constantly claiming he was the victim of election fraud - which the board said was an 'an unfounded narrative'.

'As president, Mr. Trump had a high level of influence. The reach of his posts was large, with 35 million followers on Facebook and 24 million on Instagram.

'Given the seriousness of the violations and the ongoing risk of violence, Facebook was justified in suspending Mr. Trump’s accounts on January 6 and extending that suspension on January 7,' the decision reads in part.

'However, it was not appropriate for Facebook to impose an ‘indefinite’ suspension.

'It is not permissible for Facebook to keep a user off the platform for an undefined period, with no criteria for when or whether the account will be restored,' the decision says.

The ban on Trump was the first time the company had ever blocked a politician or world leader from using the site and the decision threw up a major question of Silicon Valley's and the power it wields over free speech.

On the left, critics blamed Trump for the Capitol riot and demanded he be permanently removed.

On the right, fans and followers of the former President saw it as another step by Facebook and big tech - which is famously liberal - to squash conservative voices and stunt support for Republican candidates.

Trump himself has not yet indicated if he even wants to return to the site.

Breaking News: Facebook’s ban of Donald Trump was upheld by a company-appointed panel, a decision likely to renew the debate on big tech’s power over free speech.https://t.co/YgxWrw5Aft

On Tuesday, the day before the decision, he launched his own blog-like section of his Save America website.

On Tuesday, CFO Ned Segal said they would not be reinstating him no matter what the oversight board's decision was.

'Well, there has been no changes to anything we have shared in the past around the former president’s account.

'When you step back and think about our policies, we want to work hard to be consistent, to be transparent so people know exactly what to expect from us.

'Our team is accountable for the decisions that we make.

'There is no changes to anything we have talked about in the past,' he told Yahoo Finance Live.

Of course one of the one of the favorite artists, so to speak, on the part of some Twitter users was President Trump, who is no longer on the platform, at least not right now,

Facebook followed suit then, amid widespread criticism of the decision, turned it over the oversight board to rule on whether or not he should be censored.

The board is meant to be impartial and independent; Facebook cannot overrule it, but it pays the salaries of everyone on the board.

It took months to announce its first decisions in January. Of five cases, it overturned Facebook's decision in four and upheld one.

Trump's case is by far the most high profile. After he was banned, the board received 9,000 public complaints from people saying Facebook had overstepped its authority.

Before announcing the decision, the board tweeted a 'reminder' of how it processes cases on Monday.

First, it selects the cases to decide on based on what affects the highest number of people.

Five members then deliberate. They base their decision on whether or not the user has violated any terms of service.

Then, the five-person panel speaks with the user and with Facebook, before delivering a draft decision to the rest of the board.

A final decision is then posted on its website. Facebook can respond to the decision within thirty days, and it has just seven days to implement the decisions.

The decision on Wednesday was hotly anticipated.

Politicians, free speech experts and activists around the world are watching the decision closely.

It has implications not only for Trump but for tech companies, world leaders and people across the political spectrum - many of whom have wildly conflicting views of the proper role for technology companies when it comes to regulating online speech and protecting people from abuse and misinformation.

Whether or not Trump will actually want to return to the site remains unclear.

After an initial period of quietness, he started emailing out statements in the form of press releases to journalists and subscribers several weeks ago.

Then on Tuesday, he launched his communications platform - From The Desk of Donald Trump.

His spokesman Jason Miller has insisted it is not a social media website - though Trump has hinted that he may launch one of those too.

'President Trump´s website is a great resource to find his latest statements and highlights from his first term in office, but this is not a new social media platform.

'We´ll have additional information coming on that front in the very near future,' Miller said.

He has also spoken in interviews about running again in 2024 but hasn't formally announced yet.

During his presidency, one of his biggest fights against Silicon Valley and the power it wields over the world.

He was among Republicans who thought the companies, particularly Facebook and Google, have too much power and influence over every day Americans.

By banning him, Twitter and Facebook played into that rhetoric and only enthused his fans and followers who have long believed that he is unfairly censored by the media and left-leaning big tech.

Facebook went one step further by then banning an interview he took part in with his daughter-in-law, Lara Trump, from its sites.

The interview was for Lara's online show - The Right View with Lara Trump - which has a huge conservative following on Instagram and Facebook.

It was the first on-camera interview Trump gave after leaving office. 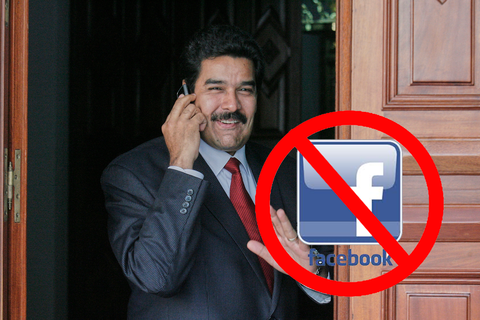 Not Just Trump: Facebook Is Censoring Another Head of State

But Facebook scrubbed videos of it from Lara's page, telling her it was also banning 'the voice of Trump' from its platforms.

Phone interviews he gave to FOX and other major news outlets were allowed to stay online.