Faisal Al-Mosawi was a promising football player at Salmiya Sporting Club and a person who enjoyed a healthy lifestyle. But his life turned upside down in an instant after a major car accident that caused him to lose movement in the lower part of his body. The accident changed his life forever, and after a series of operations and bouts of frustration, Mosawi accepted his disability and decided to achieve exceptional success, becoming the fastest diver in the world.

Kuwait Times met Mosawi, an Iraqi resident of Kuwait, to talk to him about his inspirational story. “My kinetic disability is due to a car accident in 2005. Today, I am proud to say that I challenged myself and set a world record as the fastest 10-km scuba diver. I am also a motivational speaker with more than 500 trainees per month,” Mosawi said.

“I decided two years after the accident to join university and earned a Microsoft Certified Systems Engineer (MCSE) diploma in 2007. I continued my studies and began my bachelor’s degree in finance, which helped me get involved in social life again, but I was still feeling frustrated after I lost my dream of becoming a professional football player,” he said. “After several operations in the hope to walk again, I realized it was a big mistake to link my happiness to things that may not come back, especially since it cost me time in which I could do something more useful,” Mosawi added.

Regarding the turning point that made him accept his disability and start accomplishing his impressive successes, Mosawi said: “Every year on my birthday, I was hoping I would be able to walk again. But every year nothing happened, which made me very disappointed. During one of my birthdays, I realized I wanted to change people’s lives and become an inspiration for them, especially after I heard about many disabled people who tried to commit suicide due to their frustrations in life.”

“After two years, I decided to either be a new person looking for a new dream that could change my life, or forever remain a useless person, and this was my turning point in becoming a new person with new hopes and dreams,” Mosawi said. “This changed my life in all aspects. In 2009, I decided to start learning to dive. I contacted the Swimming and Diving Center at Kuwait Science Club and obtained my first diving license from PADI (scuba diving certificate), while overcoming my fears, one of which was phobia of the sea. After that I got several more diving licenses, such as an open-water license, adventure license, advanced license and night rock diver license,” he said. 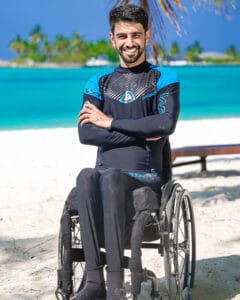 Mosawi told Kuwait Times that after he managed to achieve his dream of diving, he decided to become the fastest diver in the world among both regular and disabled divers, and started working on this dream. “In 2018, I became a Guinness World Record holder as the fastest 10 km scuba diver in the world with a time of 5 hours and 24 minutes, breaking a record that was set in 2011 by a scuba diver with no disability,” he said.

Regarding diving techniques, Mosawi explained he wears a diving glove and depends on the strength of the upper part of his body. The challenge was in training daily for more than five hours underwater to achieve his goal. He emphasized the social inclusion of people with disabilities is the most important message that he seeks to deliver to the world, stressing that with his achievements, he proved to the world that disabled people can succeed like normal people.

“The hope that I gave to parents of disabled children makes me more persistent and determined to spread the message to the world. After the accident, doctors told my parents that it will be impossible for me to get married and have kids, but with hope and prayers, I married a special girl. I now have a beautiful daughter, and she is the most precious gift I ever got,” Mosawi said.