What Will be The Future of India's Mosques?

Indian Muslims worry that several mosques will meet the fate of Babri Masjid, which was first demolished by Hindu mobs in 1991 and then officially handed over to the Hindu community in 2019. 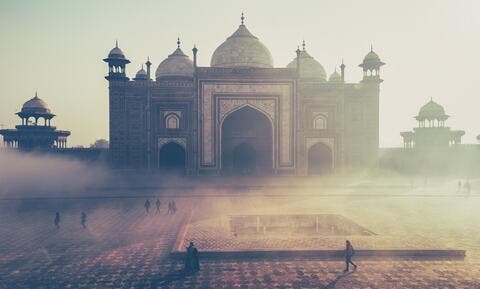 Indian Muslims Did Much to Encourage Hindu Culture!

For Muniza Khan, an activist in north India's Uttar Pradesh (UP) state, the recent petitions in lower courts to probe the origins of three mosques is “another shoddy chapter” in Indian politics.

“This time mosques may not be knocked down like it was when Babri Masjid was demolished,” she said, pausing for thought. “This time the courts may approve construction of temples, razing the mosques.”

A 16th-century Mughal era mosque Babri Masjid was demolished by a large crowd of Hindus in the winter of 1992. The demolition triggered a decades-long legal dispute with the far-right Hindu groups claiming that the Mughal king Babur destroyed a temple of Hindu god Ram and replaced it with a mosque that was named after him.

It's been clear that RSS backed @AIMPLB_Official and their lawyer Zafaryab Jilani won't agree that Babri Masjid belongs to International Muslim Community. I appeal to Indian Muslims to join us in the appeal to ICC. We can reclaim and rebuild the Masjid. In Sha Allah @OIC_OCI pic.twitter.com/pKzaYJj9sS

The legal tussle ended in 2019 when the Supreme Court of India handed over the  ‘entire disputed land of 2.77 acres in Ayodhya’ to the Hindu community, allowing the construction of a temple devoted to Lord Ram.

“Following the Babri judgement, the political parties are aware that if public opinion can be swayed in one direction, courts will be nervous enough to go against the mood of the masses as it may trigger unrest,” Khan, the activist, told TRT World.

Buoyed by the 2019 judgement, lawyers “with a mission” are regularly filing suits– mostly in UP state– challenging the legality of centuries-old mosques.

“Conversion of mosques to temples will be faster and smoother following Babri judgement,” opined Khan, a researcher in Gandhian Institute of Studies in Varanasi.

Role of a historian

The number of disputed mosques and monuments across India is around 50, inferred Vishnu Jain, a 35-year-old Supreme Court advocate who authored many of the recent petitions to dismantle mosques.

Jain said his “mission” is to challenge the legality of disputed mosques” as he believes many Islamic houses of worship were constructed “by demolishing” Hindu temples. The Delhi-based advocate’s recent petitions are premised on findings of Jadunath Sarkar, a major early 20th-century Indian historian.

Two of Sarkar’s observations on two of UP mosques– the Shahi Idgah of Mathura and the Jahanara Mosque (Jama Masjid) in Agra – formed the two petitions of Jain where he challenged the legality of the mosques.

First of the key mosques to come under Sarkar’s scrutiny is the Shahi Idgah which was allegedly built on the 13.37 acres (5.5 hectares) of land where Hindu god Krishna, as yet a mythological character, was born. Sarkar translated from Persian the annals of Mughal emperor Aurangzeb– Maasir-I-Alamgiri (1707) – composed soon after the emperor's death. Aurangzeb, Sarkar posited, “issued orders for the demolition of the temple situated in Mathura.” Page after page of the Bengali historian’s book was quoted in Jain’s petition.

“I have great respect for Sarkar,” said Jain, who is not affiliated to any religious groups but represented a Hindu nationalist outfit, Hindu Mahasabha (HMS) in the Babri Masjid case as an advocate-on-record.

In another work, ‘Anecdotes of Aurangzib and Historical Essays’ (1917), Sarkar asserted, the Mathura temple– where the Hindu god Krishna was ostensibly born– “was razed to the ground in January 1670 and a mosque (was) built on its site” while the “idols were brought to Agra and buried under the steps of Jahanara’s mosque.”

The observation formed the crux of another petition seeking a Ground Penetrating Radar (GPR) test to ascertain if the idols were buried under the steps of the Agra mosque.

Jain told TRT World a petition seeking GPR for the Shahi Idgah “will be moved in due course.”

Sarkar’s works triggered controversy in the past and may deepen the prevailing mistrust between the communities, yet his integrity as a historian is difficult to challenge despite his association with HMS, historians argue.

“Marathas thought of him as pro-Muslim in his historical accounts of (Hindu king) Shivaji while Muslims thought him pro-Hindu,” noted Dipesh Chakravarty, a University of Chicago historian in an earlier interview.

A week before the GPR application was filed in Mathura court a similar plea advocated GPR in Gyanvapi mosque in Varanasi in eastern UP, adjacent to a Hindu temple, Kashi Vishwanath. It was filed on the basis of an original suit filed in 1991 with the claim that Aurangzeb destroyed parts of the Kashi Vishwanath temple in the 17th century to construct Gyanvapi. The Varanasi court’s judge not only admitted the plea but also ordered a GPR. On October 23, 2002, the UP High Court ordered “to carry out” a GPR on Babri Masjid, the order eventually facilitated handing over of the site to the Hindus.

The Varanasi court’s order is controversial on two counts.

One, a land ownership dispute in the Kashi Vishwanath–Gyanvapi Masjid case is pending in the states’ High Court. Two, a 1991 ‘Places of Worship Act’ noted in its Section 4 (1) that “the religious character of a place of worship existing on the 15th day of August, 1947 (day India’s independence) shall continue to be the same as it existed on that day.” Thus the order surprised Anjuman Intezamia Masajid, the management committee of the mosque.

Yaseen and the committee do not accept that temples were “flattened” to construct Gyanvapi.

“We conducted our investigation and failed to figure out how the mosque was built on a temple.” The fear of the Muslim community, says Yaseen, is about the dilution of Section 4.

“If the Section is removed then petitions to flatten mosques will be filed in UP on a daily basis as thousands of mosques are claimed to be under dispute,” said Yaseen. Indian Muslims did not “utter a word” when disputed Babri Masjid land was handed over to the Hindus assuming it would put an end to the temple-mosque row.

“But it has prompted more claims and now even the 1991 Act is challenged in the Supreme Court,” Yaseen said with a sigh of disappointment.

Jain and his father Hari Shankar Jain, 68, also an advocate in the Babri Mosque case, challenged the constitutionality of the Act in the Supreme Court in 2020, arguing “parliament cannot restrain Hindu devotees to get back their religious places of worship through judicial process.”

The Jains filed a range of petitions in various courts seeking removal of mosques they considered “disputed” and even pressed for the right of the Hindus to worship in the 12th century Qutb Minar complex in India’s capital, Delhi.

Known for his access to RSS, Damle noted in his 1987 book, ‘The Brotherhood in Saffron– the Rashtriya Swayamsevak Sangh and Hindu Revivalism’ that Vishva Hindu Parishad (VHP, World Hindu Council affiliated to RSS) “identified 25 other mosques to be converted.”  Enthused by its “major role” to obtain a favourable court decision in 1986 permitting Hindu devotees to worship Lord Ram at the site of the Babri Masjid– being denied by law hundred years ago– VHP furthered its agenda to convert “two other historic sites in Uttar Pradesh'', the Shahi Idgah and Gyanvapi Mosque. Damle and his co-author Walter K Anderson, a US State Department academic-analyst, forewarned: “While this effort (to dismantle mosques) is clearly popular, and may result in enhanced Hindu solidarity, it almost certainly will exacerbate Hindu-Muslim tension.”

One of India's top legal and constitution experts A G Noorani noted: “In his essay on Frederick the Great, Thomas Babington Macaulay wrote, ‘Is it not perfectly clear that, if antiquated claims are to be set up against recent treaties and long possession, the world can never be at peace for a day?”

Another columnist Swaminathan S Anklesaria Aiyar argued that the lower courts’ admission of petitions probe mosques is “in clear contravention of the (1991) Act and the Supreme Court’s interpretation.”

“The1991 Act makes it criminal to attempt religious takeovers,” Aiyar noted. Yet more petitions are being filed routinely and the courts are hearing those too.

BJP’s trouble in UP surged as pandemic-driven deaths spiked following prolonged farmers’ resistance against agricultural reforms as the economy continued to contract. BJP won fewer seats than the opposition in recent local body polls, while an emphatic dip in Prime Minister Narendra Modi’s approval rating as per global data intelligence company Morning Consult deepened BJP’s crises in UP as the state prepares to go to polls within a year.

“BJP is in search of an issue and razing a mosque is an ideal one to polarise the society,” said Yaseen.

A temple-mosque controversy may polarise the votes on a communal line benefiting the BJP as 80 percent of UP’s 20 million people are Hindus. Advocate Jain denied that the petitions were filed to benefit BJP.

“If I intend to polarise, why would I have moved to court? Rather I would have asked the political parties to change the law,” he said.

While the Ram Janmabhoomi-Babri Mosque case was examined in court, the dilapidated mosque was knocked down. As of now, Yaseen says,  there is no such fear as the mosques are “well-fortified”.

Yet in 2018 there was an attempt to breach the security in Gyanvapi and talking about Shahi Idgah, Jain accedes that “nothing can be guaranteed.”

“If devotees do not get justice from the court and the public takes law in their hands then it is up to those devotees to decide, not me,” he said.

Political observers in UP unanimously professed, between next year’s state polls and the 2024 national election the apparently innocuous petitions will emerge as the central issue in Indian politics.