"The Sun" British newspaper reported that one of Obama's followers noticed that he is among the 1.1 million who follow the 42-year-old adult star on Twitter.

Obama's following news of Sara, who also runs a production company, made her trending on Twitter, and when people asked why, they discovered that her account includes one of America's most famous former presidents. 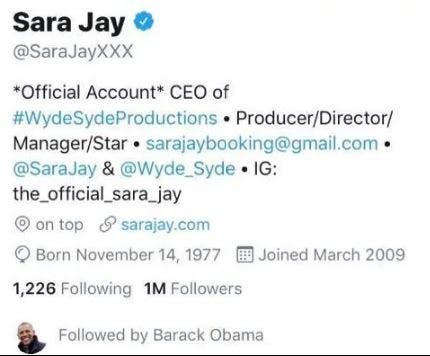 Another observer tweeted a GIF of Mrs. Obama hijacking the phone from her husband’s hand, and said, “Michelle is about to do more than extract the phone from Barack Obama. He might be in trouble. It would be better for him to unfollow Sara Jay.”