Haifa Sings Elissa's Song.. And Fans Try to Stir a Fight Between the Divas!

"and I love her @HaifaWehbe bcz she s real , honest and sweet and despite everything she s a beautiful lady inside out".

and I love her @HaifaWehbe bcz she s real , honest and sweet and despite everything she s a beautiful lady inside out https://t.co/8islirwpy4

But one Haifa fan tweep tried to stir a fight between her and Elissa, when she indirectly wrote: "despite what exactly was Elissa refering to? She could have used different words if she's going to link a positive sentence with a negative sentence. It's best we keep quiet." 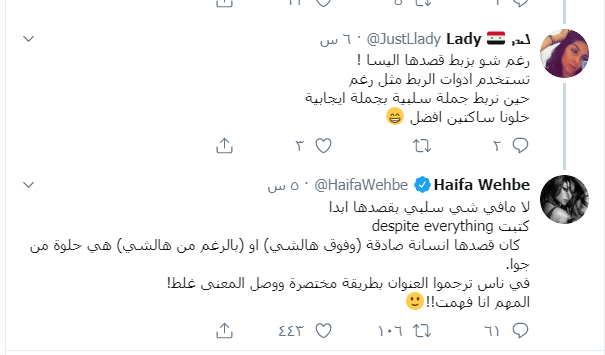 Haifa did not keep silent, and she replied to the fan by saying: "She never meant anything negative when she wrote 'despite everything.' She meant an honest person and 'on top of that' or 'regardless of this' she is beautiful on the inside. Some people misinterpreted the text, and misunderstood its real meaning. What's important is that I understood it."