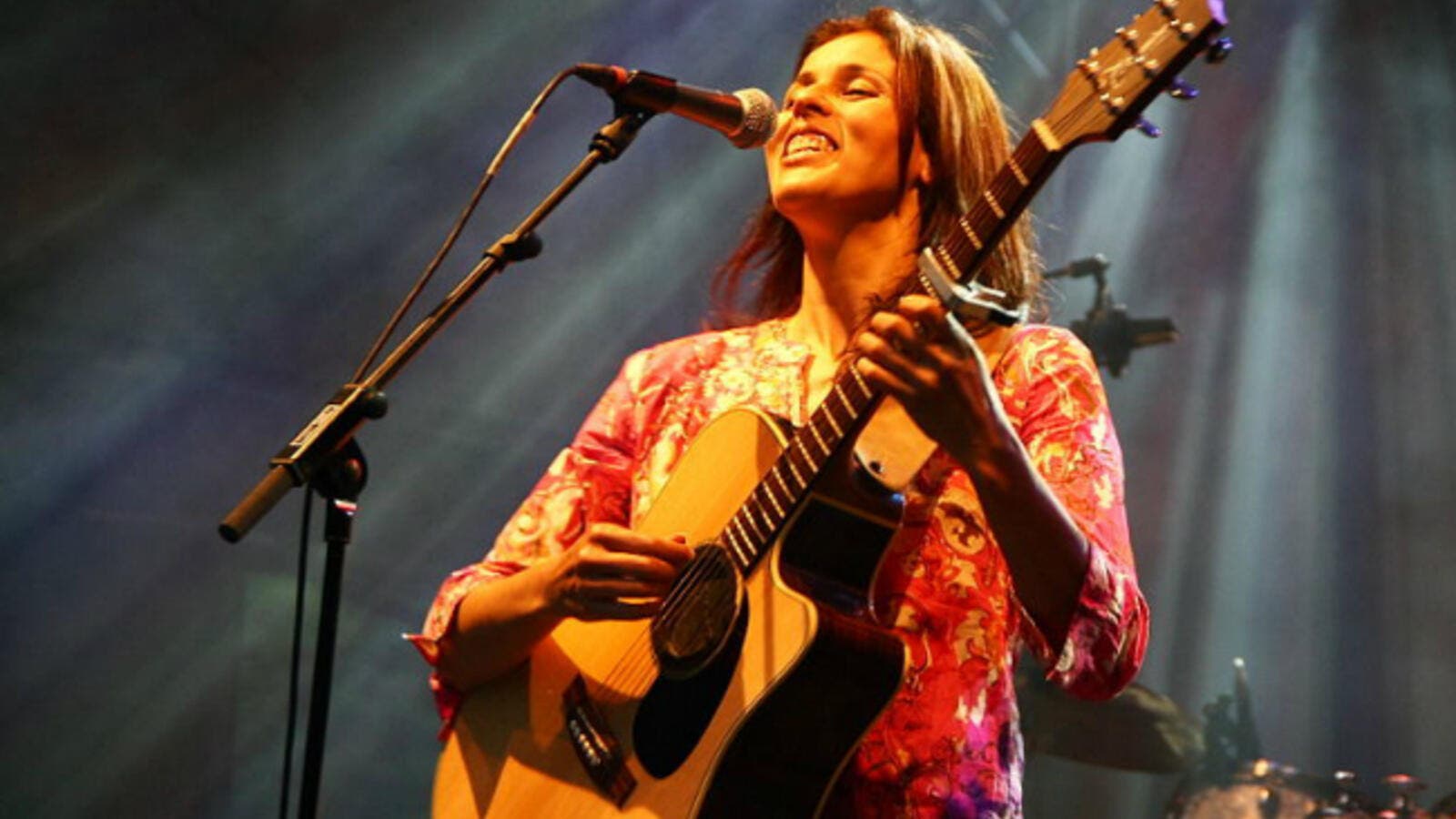 Stopping by Lebanon on her world tour, Algerian-born folk singer Souad Massi gave a laid-back and intimate performance at MusicHall Waterfront Tuesday evening. The open-air concert was completely sold out, with dedicated fans eager to see “The Best Of” Massi, as the show was tagged, boasting a program thick with fan-favorites and hits from her six albums.

Made famous by her 1999 hit “Al-Raoui” (The Storyteller), Massi is known for blending music styles, from folk and classic rock to flamenco and classical Arabic – often singing in French, Arabic and Amazigh (aka “Berber”).

Staged by Liban Jazz and Elefteriades, the concert saw Massi joined onstage by mandolin player Mehdi Dalil and percussionist Rabah Khalfa, both of whom gave fantastic solos throughout the evening.

Her full-bodied and smoky vocals had the audience singing along to the soulful “Khalouni,” and stomping their feet to the beat of “Kilyoum,” with several people dancing in the aisles. Many of her fans’ other favorite hits were also performed, including “Houria,” “Ghir Enta,” and “Matebkiche.”

Massi’s 18-year musical career began in Bab al-Oued, Algiers, when her music-loving family encouraged her to accept an invitation to perform at the Femmes d’Algerie (Women of Algeria) festival in Paris. From there she was signed for her first album, “Raoui.”

Working in collaboration with Liban Jazz, the Dar El-Nimer for Arts and Culture center has been hosting talks with the international musicians performing at MusicHall. Massi was the most recent speaker at these “Talking Music” sessions, always held the day before the concert, allowing people to learn more about the artists and ask questions.

“I used to listen to a lot of traditional Algerian music, which is all about emotion,” Massi told The Daily Star during the talk.

“At 17 I started learning to play guitar. I used to listen a lot to folk, avant-garde music, Umm Kulthum and traditional Turkish songs.

“I was working at an engineering office and received a grant to go perform in Paris and saw what the music scene was like there.”

Although Massi doesn’t always like to take requests during concerts, she’s still happy to perform her old hits with as much passion as when they were new.

“If I create a program then I stick to it,” she said. “When I wrote “Al-Raoui” I had no idea it would become such a big song.

“It’s a big thing to be there for my fans, when they come up to me and say, ‘This song took me back many years’ or ‘It made me very emotional.’ It is a big responsibility. I respect the people who listen to my music. If I ever found a day where I had nothing to say or didn’t feel like being a performer, I should just stop.”

While Massi has carved out a musical identity for herself, she doesn’t feel restricted by the style that initially made her famous, always finding room to experiment and collaborate with other musicians.

“I don’t think too much about this because in my last album I sang in [classical Arabic] in a totally new way,” she explained. “I’m not commercial. I do things that I like, which is the most important thing. I don’t care if commercially it sells or not. I only care that I like it and that people will listen to it.”

Though she lives in Algeria, Massi has not had a concert there for many years, because of her work’s activist bent.

“When I worked on the poems of Ahmed Matar, I wanted to help to get his important work known more, so I lent him my voice. A lot of people discovered him through my song ‘Houria,’” she recalled. “I’ve written a lot of political songs and even till now I don’t have concerts in Algeria because they ask me not to sing certain songs and cut them out of TV screenings.”

Massi says that her next album will be recorded in Paris and feature folk-rock themes, influenced by the work of Kenny Rodgers and Bob Dylan. In the meantime, her next stop will be Istanbul (Sept. 14), after which she intends to tour through March 2018.