Published September 9th, 2019 - 06:33 GMT
Angelina Jolie has been "jumping into" her kids' martial arts classes to prepare for her role in 'The Eternals'

Angelina Jolie has been "jumping into" her kids' martial arts classes to prepare for her role in 'The Eternals'.

The 44-year-old star - who has Maddox, 18, Pax, 15, Zahara, 14, Shiloh, 13, and 11-year-old twins Knox and Vivienne, with former husband Brad Pitt - has enjoyed getting to work out with her youngest children while getting into shape for her role as Thena in the upcoming Marvel movie.
She said: "My son Knox does some weapons classes and Viv does karate so I've been jumping into all their classes. I'm the mum that keeps showing up. It's been fun and going to the gym together is really good. Right now for Thena I'm having to do so much training because she's so positive and healthy. I often feel like it's not going to work but you've got to push yourself." 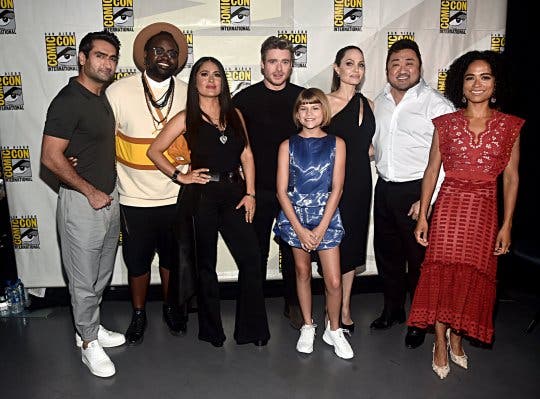 Angelina is delighted to have joined the MCU because there is so much "diversity" and she's relished getting back into an action role.

She told Britain's OK! magazine: "I'm very excited to have joined the Marvel Cinematic universe and to play Thena.

"I love how much diversity there is. Thena is very aggressive and she's a real fighter so it's been good for me to get back to weapon training. I fight a lot. I love doing action."

While playing a superhero is empowering, Angelina admitted there's nothing like the reactions of her children to keep her grounded.
Asked if the role makes her feel empowered, she said: "It does but you get the outfit on and then you're feeling really ready. "Then you see your kids and the way they look at you, like, 'What are you doing?' And you get brought nicely back down to earth, with comments like, 'You are so weird Mum.' "