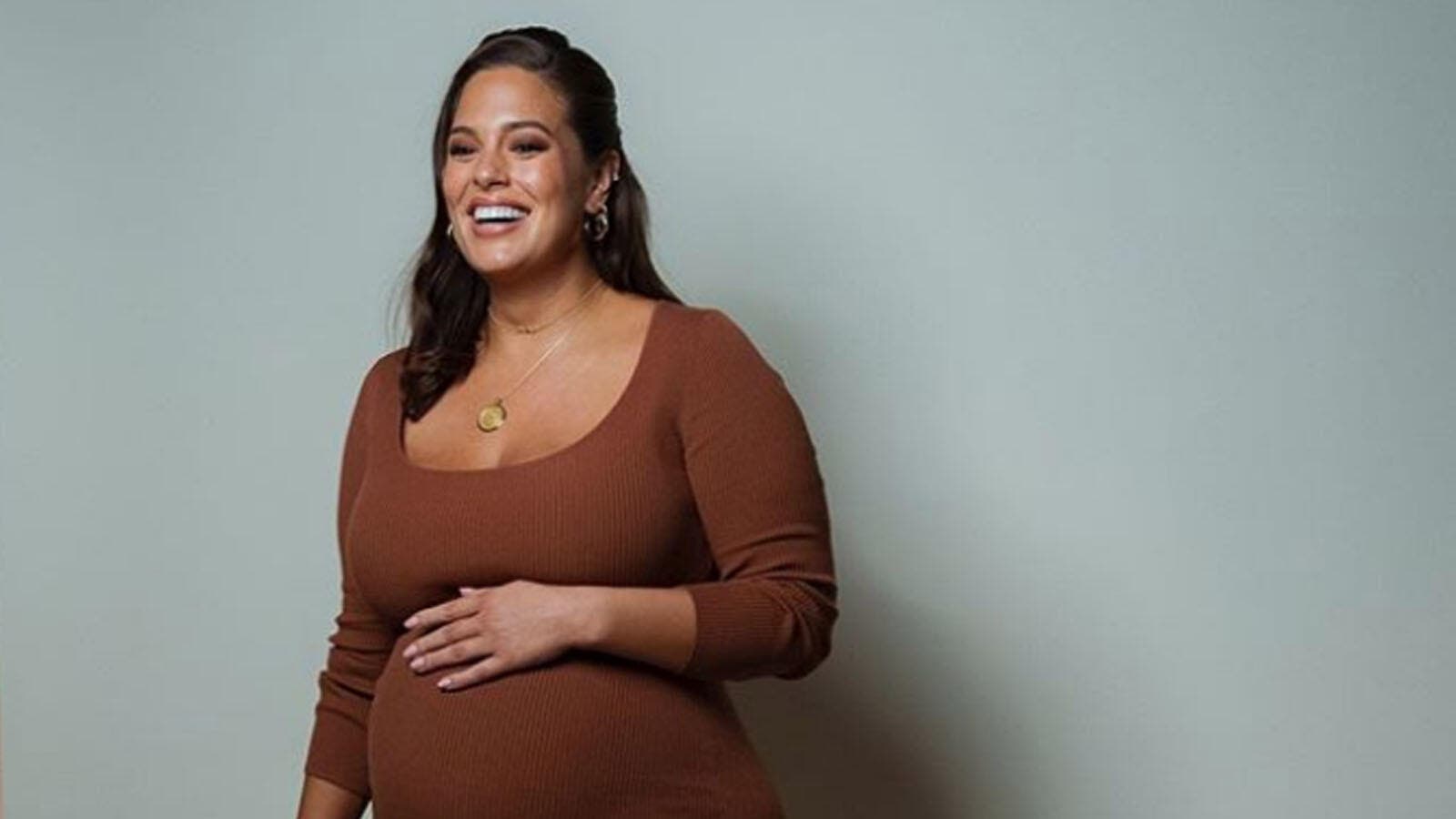 The plus-size model claimed that she has a 'complicated relationship' with her appearance.
Highlights
Ashley Graham celebrated hitting a social media milestone by continuing to flaunt her growing baby bump.

The 32-year-old model earned an impressive 10 million Instagram followers and had had the massive number written on her stomach in a series of photos and videos shared Saturday.

Despite her joyous demeanor and unabashed demeanor, her post came shortly after she admitted 'It hasn't been easy to embrace my pregnant body.'

Ashley posed for her photos while being assisted by her director and cinematographer husband Justin Ervin, 31.

The 5ft9in beauty had a black tank top rolled up to expose her tummy, which had '10 M!!' scrawled on it in double-underlined red ink.

She flashed her most infectious smile while making a heart shape with her hands.

The Sports Illustrated Swimsuit Issue star also shared a time-lapse video of a sped-up Justin drawing on her.

💥 10 MILLION 💥 I’ve had LOTS to celebrate recently and so much of it is thanks to you! As my career has evolved and grown I’ve always been able to rely on your love and support so here’s to 10 MILLION! Can’t wait to see where this journey takes us 💘

'10 MILLION I’ve had LOTS to celebrate recently and so much of it is thanks to you!' she gushed in the caption.

'As my career has evolved and grown I’ve always been able to rely on your love and support so here’s to 10 MILLION! Can’t wait to see where this journey takes us.'

Ashley's nine months pregnant, and she hinted on The Ellen DeGeneres Show in November that she was due in January, so her baby boy could come any day.

The fashion star shared another clip to her Insta Stories earlier on Saturday of her growing baby as he shifted around inside her.

'He loves to stick his butt out right at my belly button,' she captioned a worldless video her her lying on a bed and placing her hand on her stomach.

In a recent interview with Grazia, Ashley revealed she hasn't found it 'easy' to embrace her pregnant body.

The plus-size model claimed that she has a 'complicated relationship' with her appearance.

Saying she hasn't welcomed all the changes pregnancy has caused to her figure, Ashley explained to the publication: 'I feel like we all have complicated relationships with our body. Mine has been changing in some new and interesting ways.

'It hasn't been easy to embrace my pregnant body, but it's definitely a reminder of how awesome our bodies truly are.'

The Pretty Big Deal host also confessed to having 'meltdowns' over many of her clothes no longer fitting her pregnant frame.

'This morning I had a mini meltdown because nothing fits me,' she said. 'I texted my stylist and said, "I need a fitting. I just need five key pieces."'

Her comments come after Ashley revealed she is still working hard despite her baby's imminent arrival, as she promoted her new Revlon lipsticks to her Instagram followers on Friday.

The model stripped down to her bra and underwear for the Baby Mama dance as she waited for the near arrival of her baby boy.

Graham grooved the lyrics 'baby mama this your song, been pregnant for way too long.'

The brunette beauty flaunted her big bump, in a black bra, with a few lipsticks tucked at the center of her chest.

She looked gorgeous with her hair down in sleek beachy waves as she moved toward the camera and revealed the new lipsticks with the beauty brand.

The Sports Illustrated Swimsuit model chose a pink toned mauve shade and applied it to her plump pout.

'Baby Boy is coming SO soon,' she wrote. 'But that’s not the only thing! We’re launching NEW SHADES for my @revlon Never Enough Lip collection!! Coming sooooooon!!'

Back in August she and Justin announced they were expecting on their nine year wedding anniversary.

She has been open about her pregnancy, sharing photos of her rolls and stretch marks and weight gain.

Though she doesn't care about her pregnancy weight gain. Speaking a month ago the brunette beauty wrote on Instagram: 'Throughout my pregnancy so far I've gained 50lbs. And the best part is, I don't care! I have never felt better, and I am so thankful that my body and son have allowed me to be as mobile and flexible as I have been.

'Between working out, yoga, acupuncture and lymphatic massages- I finally feel like I figured out this whole pregnancy thing and how to feel my best.'

Last month, Ashley compared her pregnancy to a daily 'sci-film.'

The Nebraska native garnered gushing praise for the photo that earned over 870K likes within its first three hours of posting.

Fellow model Emily Ratajkowski was even enamored, dropping a few heart-eyed emojis in the comments.

Ashley announced that she and husband Justin Ervin were expecting in August 2019 with an adorable Instagram post.

'Nine years ago today, I married the love of my life. It has been the best journey with my favorite person in the world!' she wrote in the caption of a video of herself and Ervin.

'Today, we are feeling so blessed, grateful and excited to celebrate with our GROWING FAMILY!'

Graham's black-and-white spread from Friday joins the collection of multiple nude pregnancy content pieces she has shared via social.

A photo she captioned 'same same but a little different' that put her stretch marks on display inspired copycats abound on the Instagram platform.