Adele's first album since 2015 will not be released in September.

The singing superstar, 32, took to Instagram on Saturday where she confirmed her highly-anticipated fourth album is delayed because she's quarantining amid the ongoing COVID-19 pandemic.

Responding to a fan on social media, Adele urged for patience and wear face masks, telling them: 'Corona ain't over!'

After posting a throwback snap of herself performing at Glastonbury, a follower commented asking: 'Teaser? Albums coming out today???!!!! Tell me now!!!!'

Quick to put rumours to bed, Adele responded: 'of course it's not. Corona ain't over. I'm quarantining. Wear a mask and be patient.' 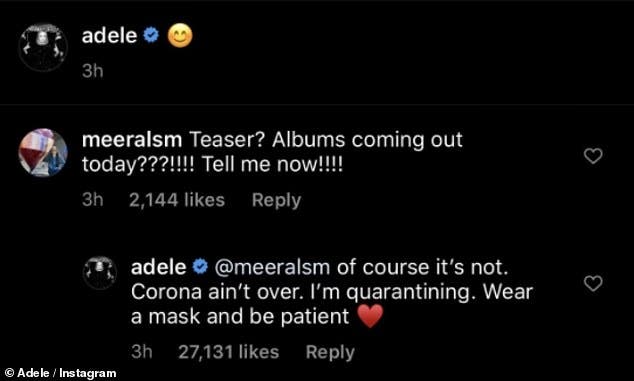 It comes days after her manager Jonathan Dickins admitted that there is currently no date for when the project will hit shelves.

Months after speculation among fans that the global lockdown had pushed the album's release date back to 2021, he told Newsweek: 'It isn't coming in September, it'll be ready when it's ready.

'We're all in the same boat, you're doing stuff and then all of a sudden, the world stops. It'll come when it's ready. I can't put a date on that yet. We have music, but we're still working.'

Back in April, fans had expressed fears that the mother-of-one wouldn't be releasing her latest project this year, after she made a comment on Instagram.

The star, whose last album, 25, sold 22 million copies worldwide and earned two Grammy Awards, was tuned into an Instagram Live between producers Babyface and Teddy Riley at the time.

The chat was continually interrupted by glitches, leading Adele to comment:  'Come on, it's 2020 – we ain't meant to get what we want!'

This has now sent her fans into a tailspin, believing it's confirmation that the album will be postponed til next year.

The likes of Lady Gaga, Sam Smith and Alanis Morissette have all put their forthcoming album releases on hold thanks to the global health crisis.