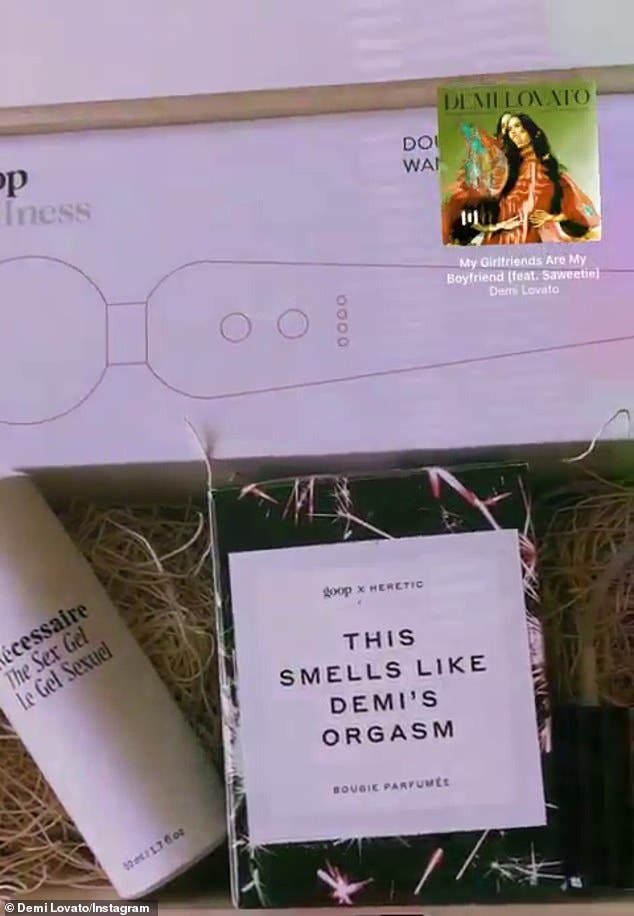 Gwyneth previously sent Keeping Up with the Kardashians star Kim Kardashian the same exact care package on March 26, and she reacted giddily.

'I've never been more excited, honestly, for a candle,' the 40-year-old reality star said at the time.

'Thank you Gwyneth, I love you, thanks Goop!'

Coincidentally, Kim supported her 'baby' at the drive-in premiere of her four-episode docuseries Demi Lovato: Dancing with the Devil at Beverly Hills' Beverly Hilton on March 22.

In it, the former Disney Channel star details the near-fatal heroin and fentanyl overdose she suffered inside her $8.3M Hollywood Hills mansion back in July 2018.

Demi - who's California Sober - is now 'legally blind with hearing loss and brain damage' after suffering 'three strokes and a heart attack.'

Lovato's post came a week after she confirmed she was 'pansexual' on The Joe Rogan Experience. '[I like] anything, really,' the Anyone songstress shrugged on the March 27th episode.

'In this moment I want to adopt [children] for sure.

I also don't know if I'm going to end up with a guy, so I can't really see myself even getting pregnant. I don't know. I'm so fluid now, and a part of the reason why I am so fluid is because I was super closeted off.'

Regardless, Lovato has always been an outspoken advocate for LGBTQ rights, winning GLAAD's Vanguard Award in 2016.

Last Friday, the New Mexico-born belter dropped her seventh studio album Dancing With the Devil... The Art of Starting Over featuring duets with Ariana Grande, Saweetie, and Noah Cyrus.

Suez: Don't Let 'Kleptocracy' Get in The Way!