Published May 5th, 2022 - 12:59 GMT
Saad Lamjarred was previously jailed more than once

Elissa celebrated the release of her new song “Min Awwal Dekika” which is a duet with Saad Lamjarred. 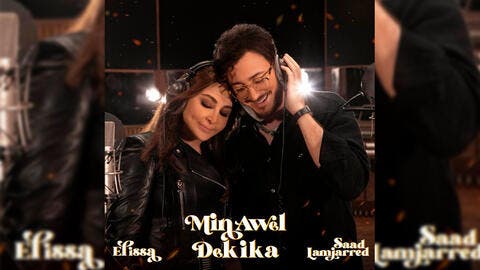 The song which achieved high number of views on YouTube in less than 24 hours after its release, was first released yesterday on Wednesday.

And Elissa tweeted, via her Twitter account, saying: I woke up to this number 1.7 million on YouTube and 2.4 million on Instagram I cannot be more grateful than that and I cannot do it without you.

Saad Lamjarred had stated to ET in Arabic that he and Elissa rushed to implement the song when they met in the French capital, Paris, and said that the chemistry between them was high, and that Elissa entered his heart "from the first minute".

The clip for the song was filmed in Paris, and it included scenes from the scenes of the preparation of the song in the studio, and Lamjarred said that he is optimistic about its success.

Elissa had previously spoken on the Saudi program "Marahel" about an upcoming collaboration with a well-known Moroccan artist, without revealing his name, before publishing the details of the work.

This duet comes after Eid Al-Fitr, and after works issued to them during the last month of Ramadan.

Moroccan singer Saad Lamjarred was previously jailed more than once and released on bail over accusations of sexual assaults against four women with the latest, Saad attended a testimony at the Court of Appeal in Paris in the case of raping Laura Prioul, a French national.