Abduallah Kanaan, ex fiancé of Jordanian fashionista Zain Karazon, has anounced that he has been released from jail.

The handsome Jordanian man has re-shared an Instagram Story of his picture, captioned by a friend "Thank God for your safety, blonde."

Kanaan posted several footage with his family and friends after they reunited following his release from prison.

Abdullah's pictures were heavily circulated on social media, and followers indicated that the one month imprisonment had its impact on Abdullah, as his muscles looked less bulgier. Some followers said that he's even more handsome now, and others branded him as a handsome drug dealer.

A month ago, Security Authorities in Jordan had arrested Abdullah Kanaan in possession of narcotic substances along with another person who was also accused of drug dealing.

Later it was revealed that Kanaan has a record of illegal actions, including causing sabotage and demolition, drunkenness associated with riots, attempted murder, robbery with the aim of simple harm and unnecessary gunfire and contempt, according to what many media outlets reported at the time.

When news of arresting Abdullah Kanaan broke, Zain Karazon announced her separation, after the couple had caused a sensation with their engagement party, after Abdullah popped the question at Zain's birthday celebration. 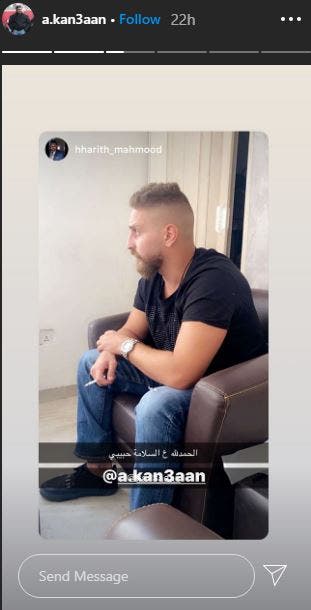