Kamala Harris looked regal in a purple outfit created by black designer Christopher John Rogers as she was sworn in as Vice President at the U.S. Capitol on Wednesday, making history as the first woman — as well as the first black and South Asian woman — to hold the position.

The 56-year-old, who was joined by her husband Doug Emhoff, wore the eye-catching coat over a matching purple dress. She topped off the look with a custom pearl necklace by Puerto Rican designer Wilfredo Rosado, black heels by black designer Sergio Hudson, leather gloves, sheer tights, and a mask.

Purple is traditionally recognized as a sign of bipartisanship as it's a mix of the political party colors, Republican red and Democrat blue, according to The Hill.

It's also one of the colors of the women's suffragette moment. The combination of purple, white, and gold was used by the National Women's Party in the U.S.

'Purple is the color of loyalty, constancy to purpose, unswerving steadfastness to a cause,' the organization wrote while describing the meaning of the colors in a newsletter published on December 6, 1913. 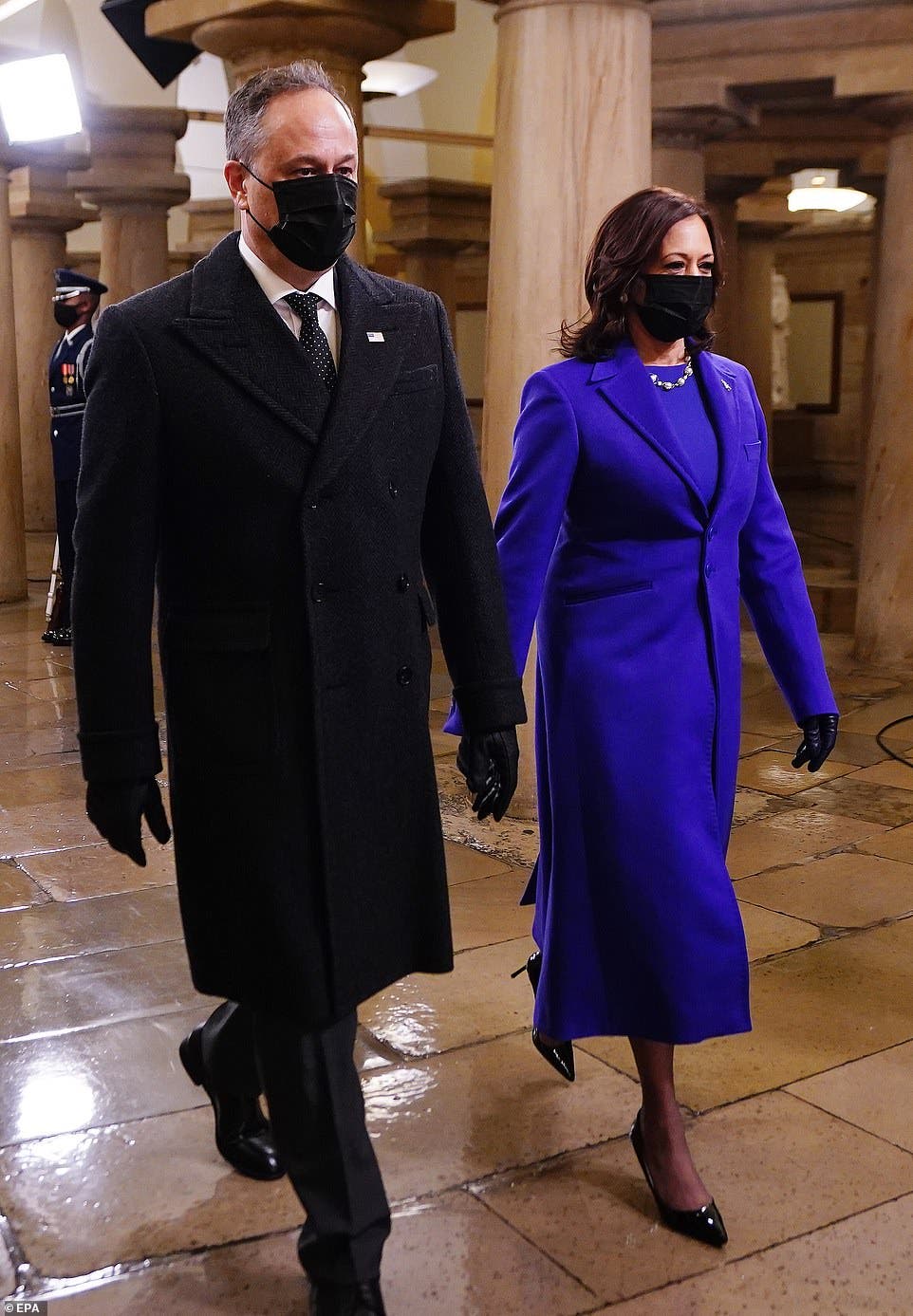 Mrs. Obama, who was joined by her husband, former President Barack Obama, cut a stylish figure in a head-to-toe plum suit by Sergio Hudson. The 57-year-old wore a floor-length coat over a form-fitting turtleneck and wide-leg pants — all in the same deep shade.

She topped off the look with a matching belt featuring a large gold buckle that pulled the outfit together. Her dark hair was worn down in loose curls, and she had on a black face mask that matched her heeled boots and leather gloves.

'On such important events like today we always consider the tailoring to be the top priority,' the New York-based couturier said. 'It's the best magic trick to make you look flawless on camera just like Mrs. Obama showed again today.'

Rilling added: 'We have been working on it little by little for the last couple of months  — but of course, as always, there are last-minute tweaks that usually go into the early hours of the a.m.' 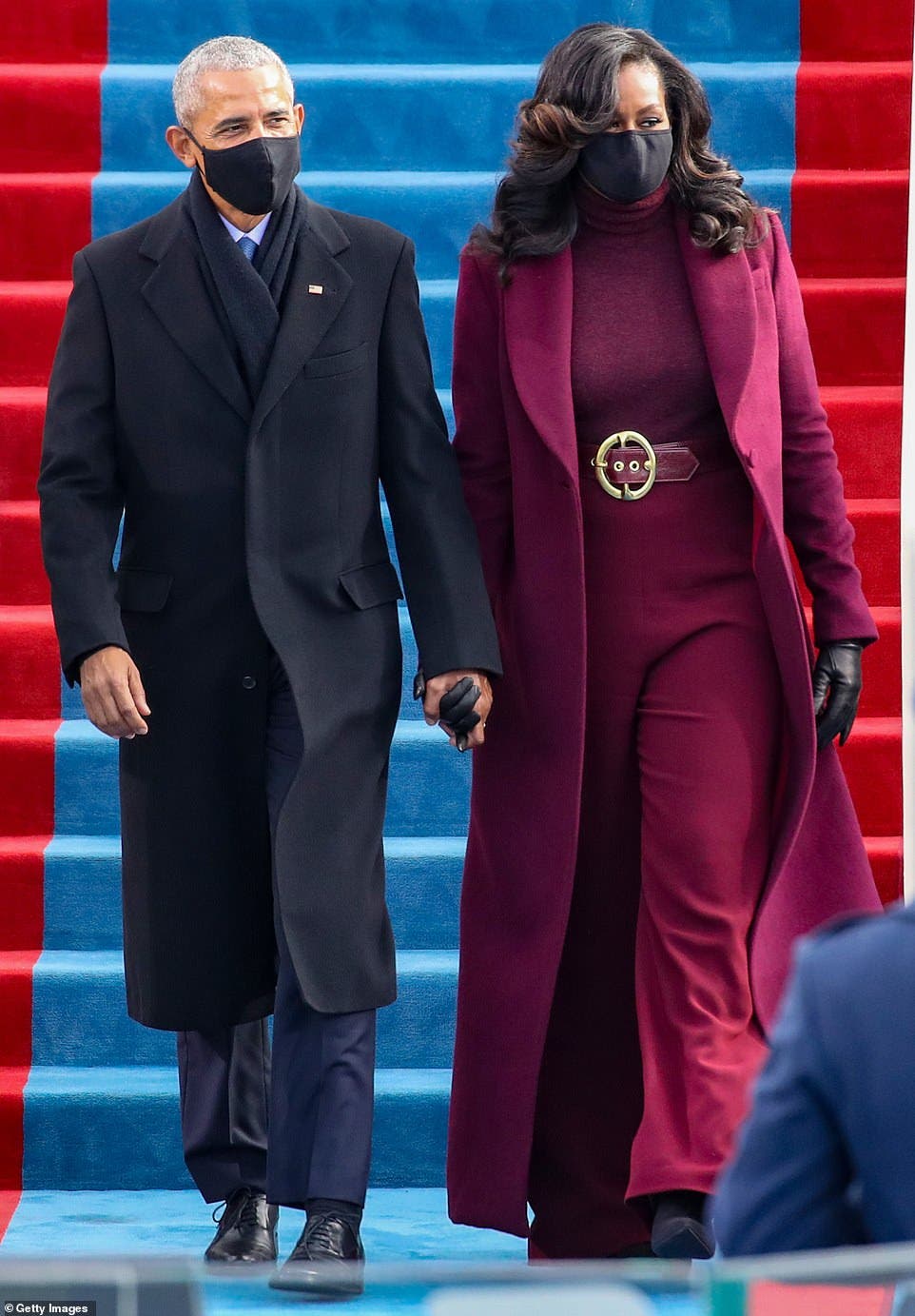 Purple appeared to be the color of the day as Mrs. Clinton, 73, donned a bright purple suit and matching scarf. To keep warm, the former secretary of state also wore a dark wool coat over her suit.

Like Mrs. Obama, she had on a black mask that matched her gloves and shoes as she arrived with her husband, former President Bill Clinton.

Mrs. Clinton told the Capitol Hill press pool that she wore 'purple with a purpose.'

'I knew the theme President Biden was striking was unity and I thought if you combined red and blue, the way that we are divided politically in our country, you get purple,' she said with a laugh. 'So I want to just to send a bit of a symbolic message that we need to come together.' 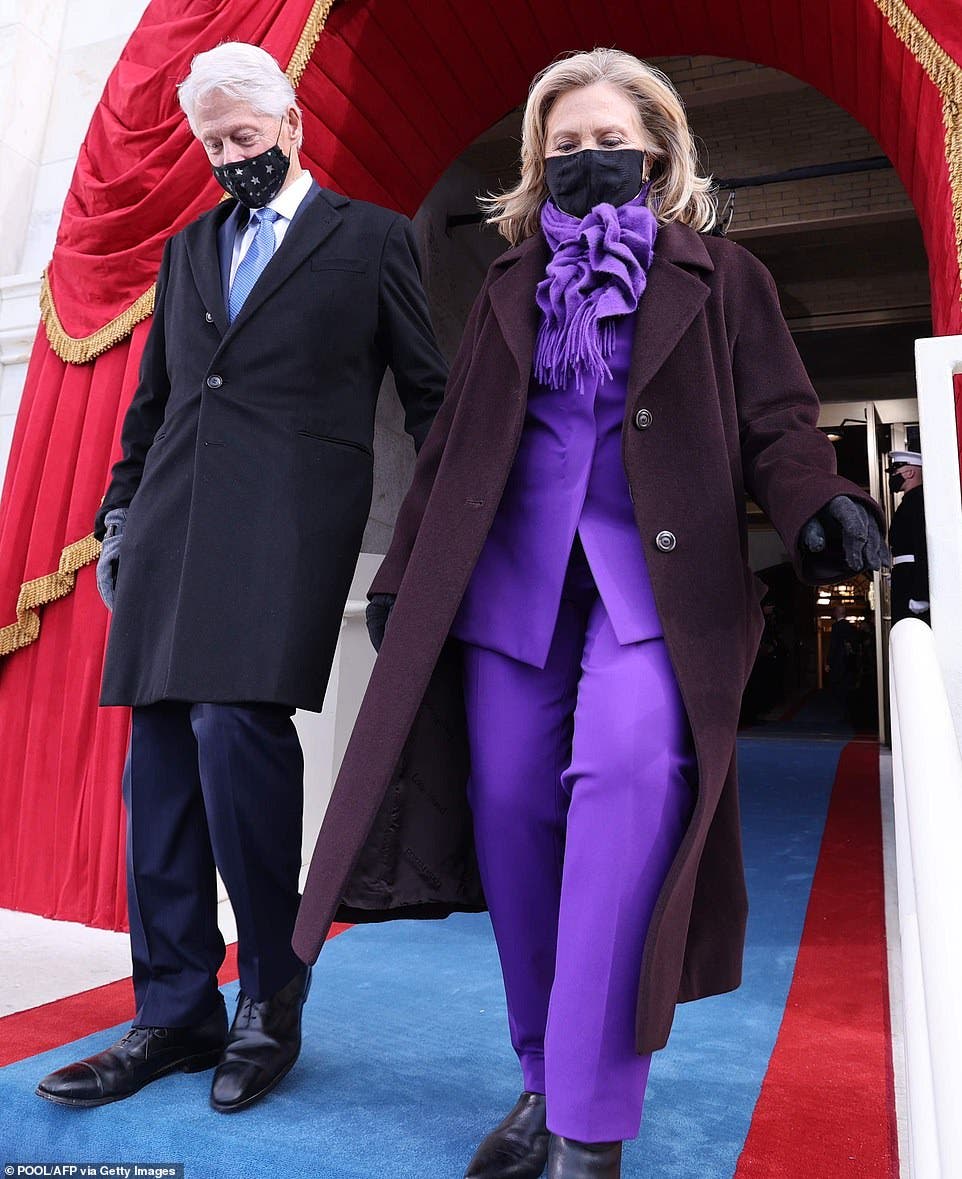 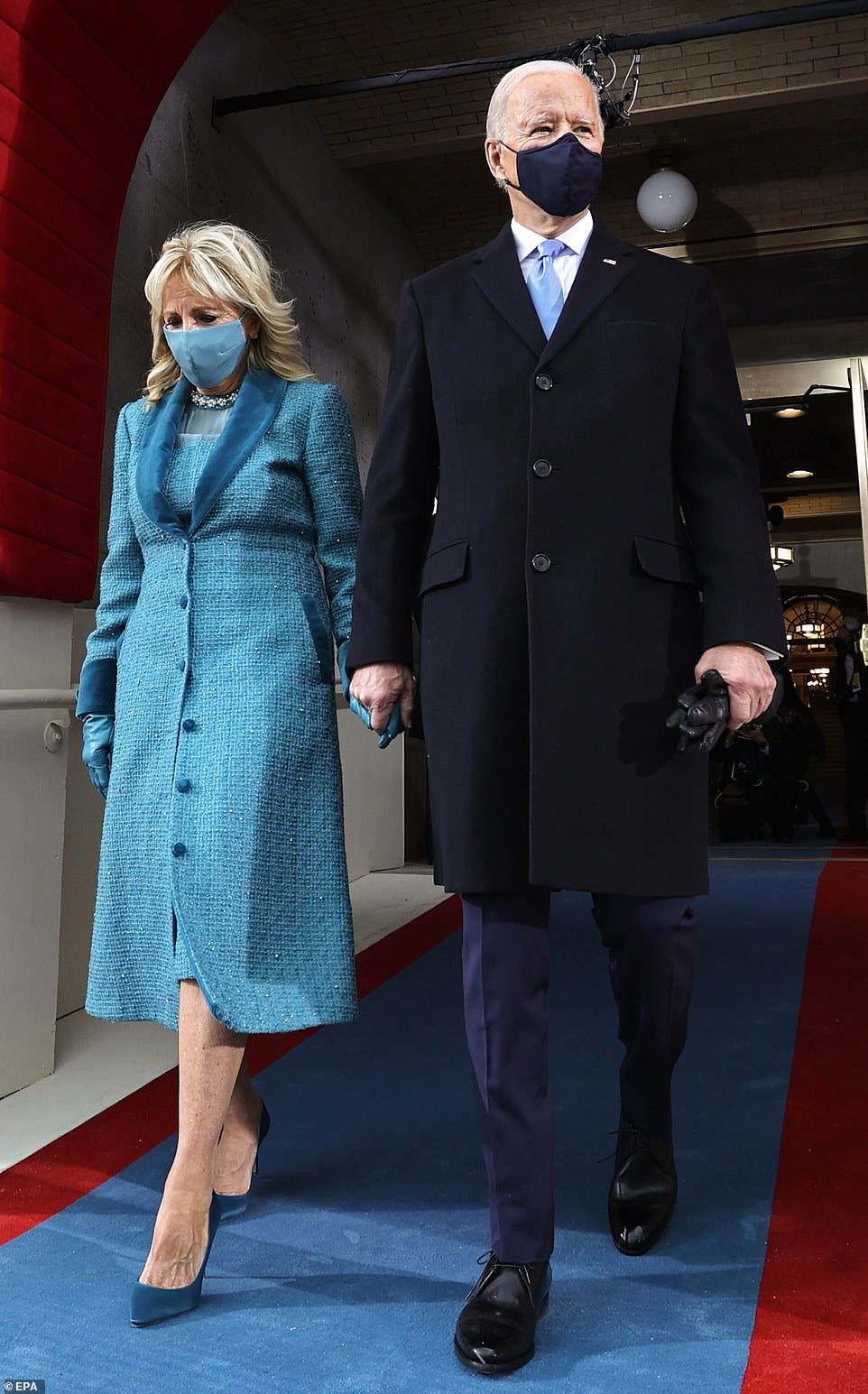 Mrs. Bush, 74, wore a powder blue coat with a dark lapel over a slate-gray dress and sheer tights. She accessorized the look with a long silver ball necklace, a light gray mask, and flats.

The top button of her coat was buttoned, and she carried a small gray leather handbag that perfectly matched her dress as she walked arm-in-arm with her husband, former President George W. Bush. 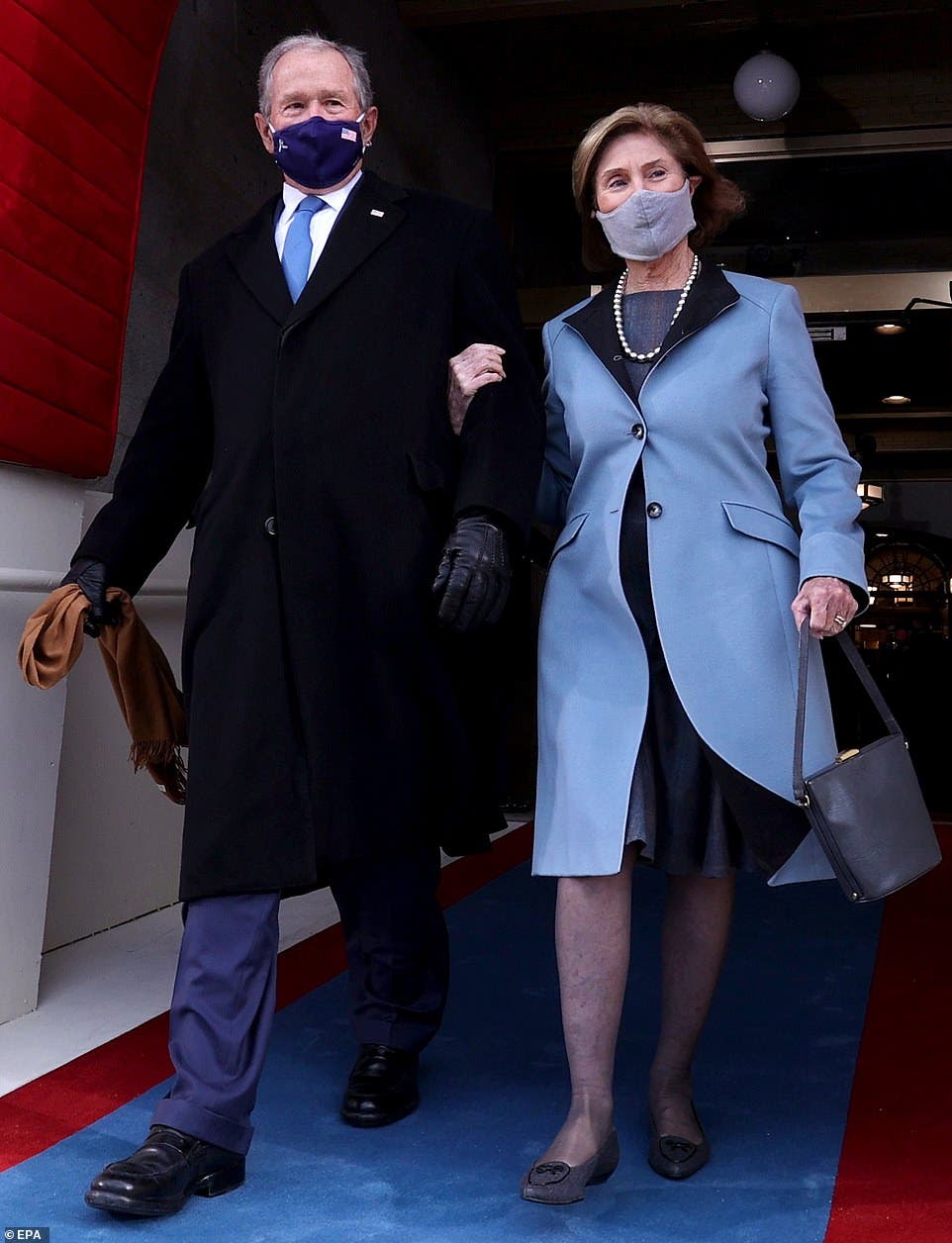 House Speaker Nancy Pelosi, 80, also stood out in a shade of blue. She donned a bright teal coat, which she wore over a white dress. Her scarf, heels, and patterned mask matched her coat, and she also sported leather gloves.

Outgoing President Donald Trump and First Lady Melania skipped the inauguration and flew to his Mar-a-Lago estate in Palm Beach, Florida, turning their backs on their successors in a gesture unseen since 1869. However, she got in one last sartorial look at the White House.

She was seen boarding Marine One on the South Lawn in a somber all-black outfit that featured a Chanel jacket priced at over $5,600, a pair of $795 Christian Louboutin heels, and a black crocodile Hermes Birkin worth more than $70,000. 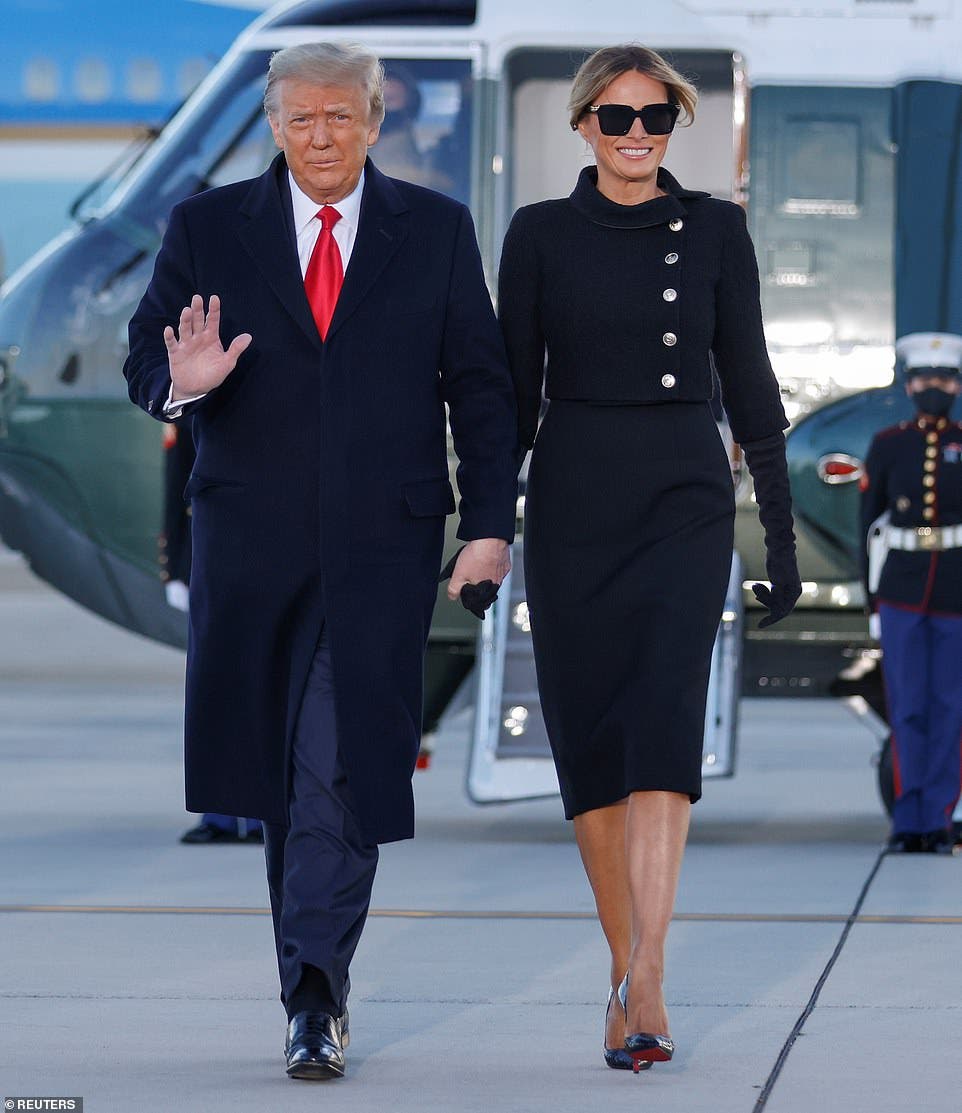 Outgoing Vice President Mike Pence and his wife Karen chose to stay and watch Biden be sworn in, but she took a cue from Mrs. Trump and wore all black.