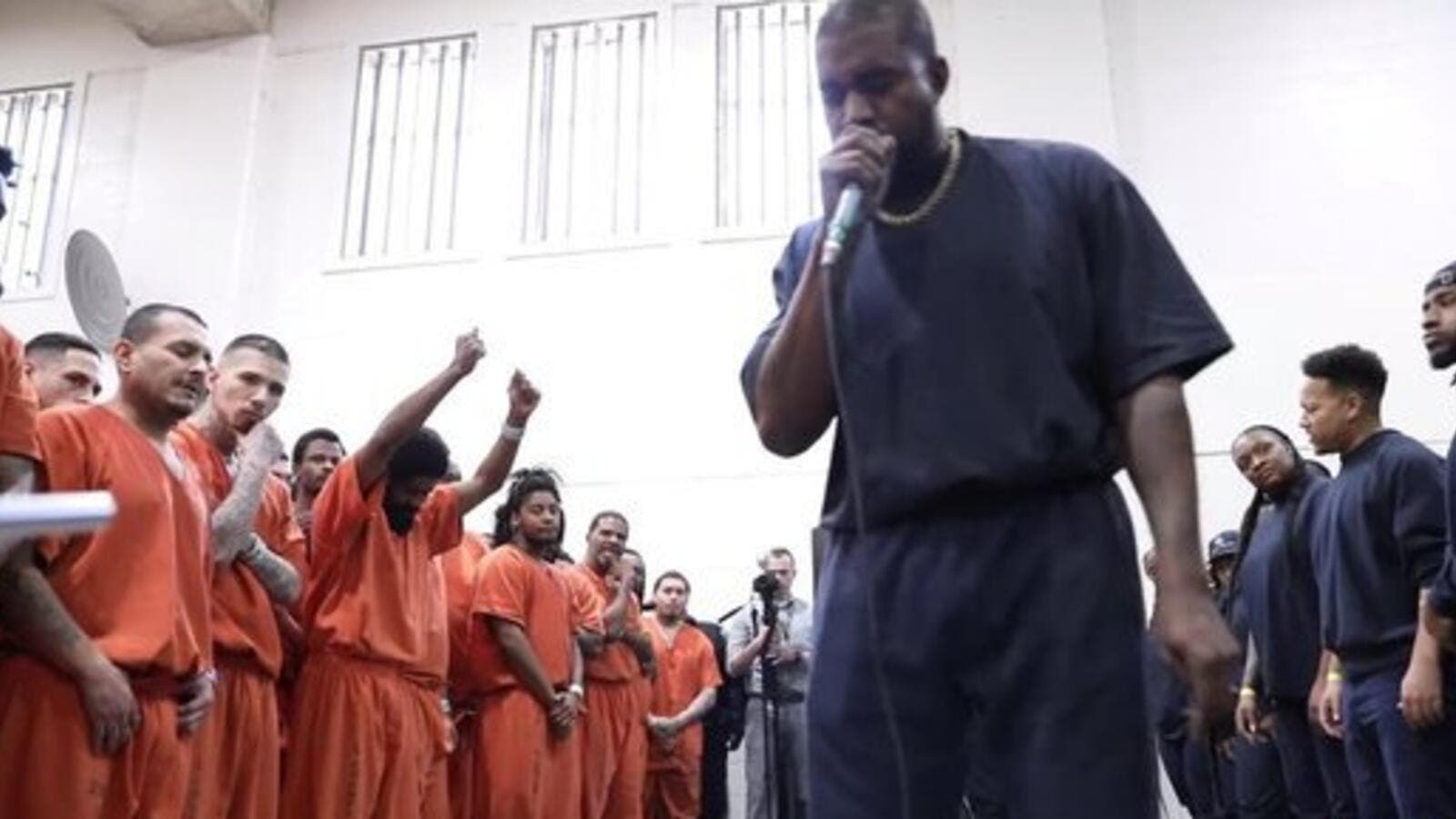 Kanye West (Twitter)
Highlights
The Jesus Walks rapper and his entourage of about 100 singers and musicians arrived to set up the show early Friday morning.

He's taken his Sunday Service program across the country to spread his music.

Kanye West brought the religious performance somewhere new on Friday: the Harris County Jail in Houston, Texas, according to TMZ.

The 42-year-old rapper's show came days before he was set to bring the show to the controversial pastor Joel Osteen's megachurch.

Kanye set up the performance himself on Wednesday, according to law enforcement sources, and the jail may have piqued his interest because of its large religious program.

The Jesus Walks rapper and his entourage of about 100 singers and musicians arrived to set up the show early Friday morning.

The performance was reportedly a surprise to almost everyone at the jail, as only a few people were involved in setting it up.

Kanye was pictured with Harris County Sheriff Ed Gonzalez while at the prison, and the elected official tweeted out his thanks for the visit.

'@kanyewest visited us today. I know he has a busy weekend in H-Town surrounding his visit to @lakewoodchurch, so appreciate him and his choir spending time with us,' he wrote.

Kanye stayed at the jail for a few hours and put on two separate performances, one for male prisoners and one for female prisoners.

The two shows each reportedly drew a few hundred attendees.

The surprise show was a far cry from the massive performance he put on the previous Sunday at The Forum in Inglewood, adjacent to Los Angeles.

Kanye performed much of his new album Jesus Is King, which he released on October 25 after numerous delays.

Kanye is set to bring his traveling show to Lakewood Church in Houston on Sunday.

The megachurch is home to televangelist Joel Osteen, who has courted controversy and even been labeled a heretic by some evangelical Christians for his adherence to prosperity theology, which states that material rewards are a sign of God's approval of pious Christians.

However, the pastor disputed stated to the CBC that he believes health and strong personal relationship can be a reward for faithful followers, but not money.

Kanye has attracted his own share of criticism that his new religious phase is more about his own enrichment than a higher power.

Kanye will be appearing at Osteen's church twice, first at the 11 a.m. service when the pastor will interview about him about h is journey to faith and how he has overcome adversity throughout his year.

He'll return at 7 p.m. to perform his Sunday Service show with the full choir and band.

The first 45,000 people to get tickets will be able to get into the concert for free, though the overwhelming demand temporarily overwhelmed Ticketmaster.

The website went down for maintenance during a pre-sale Friday in which only a portion of the tickets were going on sale.

Many luck ticket holders quickly listed the tickets online for hundreds of dollars each.

The venue only has seating for 16,800 people, but Kanye will perform in an overflow area that can accommodate many more.

Kanye reportedly worked on setting up the details of the church show while he was in Houston last weekend to perform at Travis Scott's Astroworld festival.

'Kanye and Joel are friends,' Lakewood Church spokesperson Donald Iloff, Jr. told The Houston Chronicle. 'He's been wanting to come out for some time and it just worked out for this weekend.'

It's not known who might accompany Kanye on stage, though it seems like that he'll have some high profile guests for such a large performance.

It's also not clear if his wife Kim Kardashian or his children will attend the show, though they're regularly seen just off stage and his oldest daughter North, six, often dances on stage.