Published June 21st, 2021 - 07:12 GMT
Kim didn't appear in the picture with Wes
Highlights
Kim Kardashian paid tribute to her estranged husband Kanye West over Instagram with a heartwarming family snap of him with their four children on Father's Day.

As the 40-year-old reality star celebrated the holiday for the first time since filing for divorce from the rapper, 44, in February, she shared a sweet slideshow honoring him and 'all the amazing dads in' her life, including Caitlyn Jenner and her brother Rob.

'Happy Father’s Day,' she captioned the sweet snaps, including one of herself as a kid kissing her late father Robert Kardashian's cheek alongside older sister Kourtney.

While Kim didn't appear in the picture with West, he could be seen beaming as he posed with their daughters North, eight, and three-year-old Chicago as well as sons Saint, five, and Psalm, two.

The KKW Beauty founder also honored her ex-parent, Caitlyn, who was married to her mother for 23 years by uploading a throwback of her covered in silly string.

Since they wed when Kim was just 11, the Olympian, 71, paid a pivotal role raising the mom-of-four as well as her siblings Kourtney, Khloe, Rob and Caitlyn's youngest children Kendall and Kylie Jenner.

The other dads in her slideshow included her sister Khloe's on-again, off-again beau Tristan Thompson, 30, with their three-year-old daughter True.

Her post may have been inspired by her mom Kris Jenner's Instagram tribute, which honored all the same men as well as her ex Caitlyn, who her children still refer to as 'dad' after she transitioned in 2014.

'Happy Father’s Day to all of the incredible fathers in our lives!! Thank you for the unconditional love, the guidance, the support and the lessons you give to our families,' Kris captioned a PicCollage of the dads in her life with their children.

She continued: 'To all the fathers, step fathers, fathers to be and father figures out there, we celebrate you today!! Enjoy your day!'

Kris is currently in a relationship with Corey Gamble, who she began dating six years ago.

Meanwhile,  on the occasion of Father's Day, Caitlyn's youngest child Kylie posted some sweet throwback images along with a lovely selfie with her father   on Sunday afternoon.

The makeup mogul, 23, included two throwback snaps from before Caitlyn's transition, when she was still called Bruce. 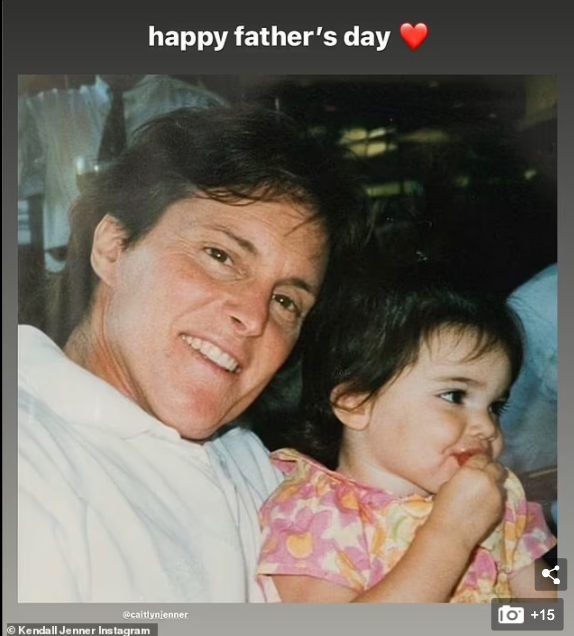 One showed the Olympian from her days as a track and field star, wearing shorts and a tank top in the colors of the American flag.

Another nostalgic image saw Kylie with her older sister Kendall as little girls, posing underneath their father.

Several pictures showed Caitlyn in her prime and as a gold medal-winning athlete from back in the 70s.

In one snap, Caitlyn held both the Olympic torch and one of her daughters as a baby.

The posts come hours before the highly-anticipated two-part reunion special of Keeping Up With the Kardashians is set to air on E! at 8 p.m. ET.

Trailers for the episode have teased conversations about Kris speaking on whether she has forgiven Caitlyn, Khloe talking about Tristian's cheating and Kendall's very private relationship with boyfriend Devin Booker.