Kourtney and Travis Share Pictures From Their Official Wedding

Kourtney Kardashian and Travis Barker share pictures from their wedding.

The lovebirds took to their Instagram page to share with their followers pictures of their official wedding that took place in Santa Barbra.

Kardashian shared 8 black and white pictures documenting the intimate ceremony, the Poosh founder published a picture where she can be seen kissing Travis in a vintage car with a sign on the back saying 'Just Married' and metal cans dangeling from the back hood of the car.

The rest of the pictures were snaps of the lovebird in their 'wedding' car, and one shows Kourtney in her short lace Dolce & Gabbana dress, with her legs up the front car seats, and a wedding veil on her head, the TV personality made sure to include family as she and Barker took pictures with her maternal grandmother Mary Jo and Travis' father Randy Barker.

The post was simply captioned by Kourtney: 'Till death do us part.' 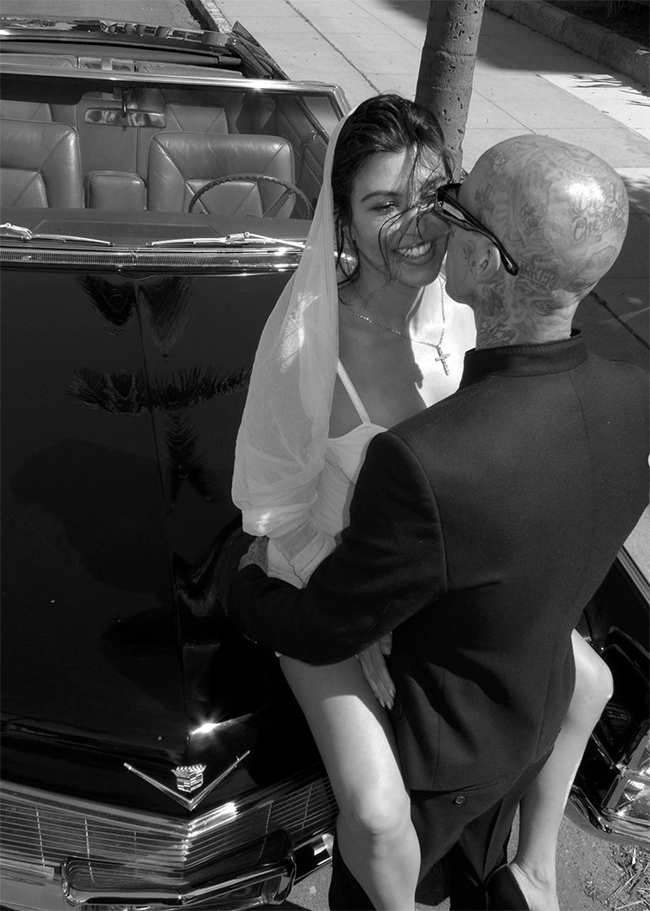 The new groom also took to his Instagram to share similar photos, but what was added was a picture of him hugging Kardashian while she sits on the hood of the wedding car smiling.

Barker added the same caption written by his new wife.

The duo previously made headlines when they celebrated their love in Las Vegas, however, they didn’t obtain a marriage certificate, so they weren’t legally married.