Meghan Markle During World Mental Health Day: I Was the Most Trolled Person in the Entire World in 2019

Meghan Markle has said that she 'was the most trolled person in the entire world in 2019' as she and Prince Harry made their podcast debut for World Mental Health Day.

The Duke and Duchess of Sussex discussed the stigma surrounding the topic and 'how we can all contribute to a healthier world: physically, mentally, emotionally and holistically' with high school students from their Santa Barbara villa.

The podcast, entitled Teenager Therapy, describes itself online as 'five stressed, sleep deprived, yet energetic teens sit down and talk about the struggles that come with being a teenager'.

The most recent episode starring Harry, 36, and Meghan, 39, went live this evening and saw the couple talk to hosts Gael, Kayla and Thomas about their own experience of mental health.

Meghan said that the impact of the pandemic had pushed people increasingly toward the internet which she claimed opened up a 'vulnerability' and a place for 'disconnection'.

She said: 'I can speak personally because I'm told that in 2019 I was the most trolled person in the entire world - male or female.

'Now eight months of that I wasn't even visible. I was on maternity leave or with a baby. But what was able to just be manufactured and churned out. It's almost unsurvivable.' 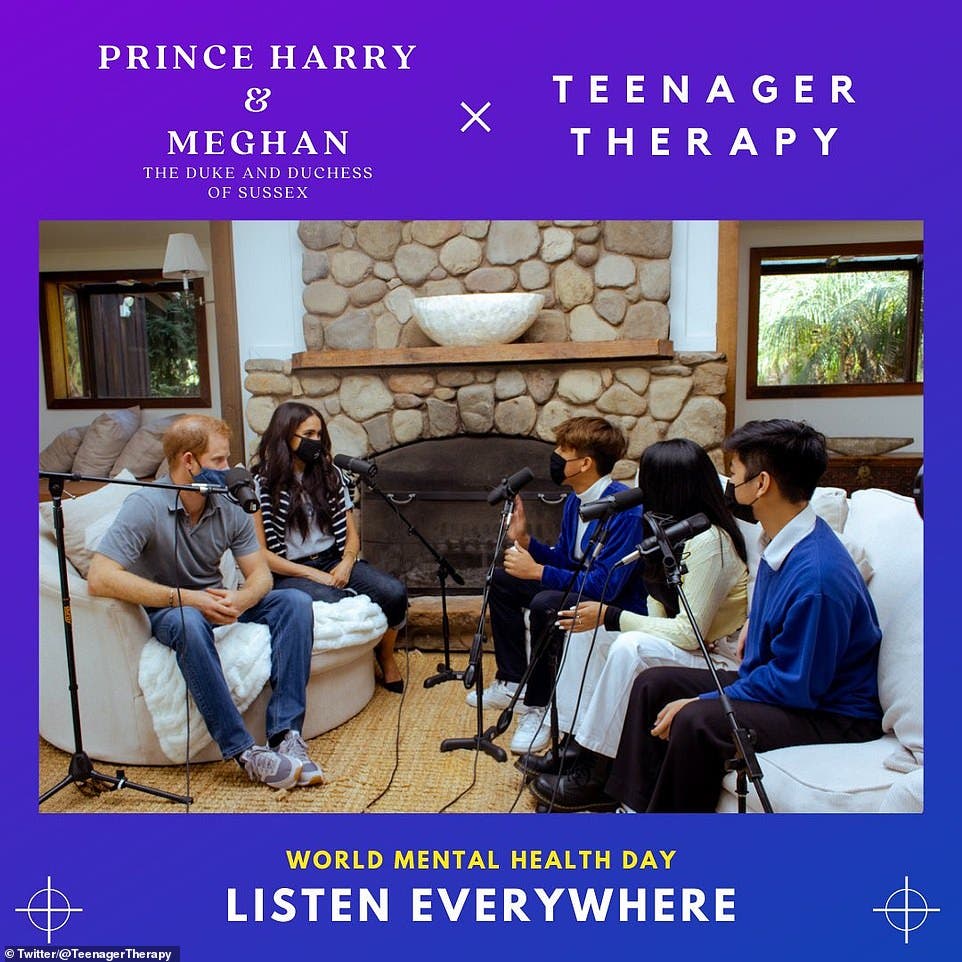 She added: 'That's so big you can't even think about what that feels like because I don't care if you're 15 or 25 if people are saying things about you that aren't true what that does to your mental and emotional health is so damaging.

'And so I think from my standpoint, and part of the work that we do from our own personal experience, being able to talk to people and understand that even though our experience is unique to us - and obviously can seem very different to what people experience on the day-to-day - its still a human experience and that's universal.

Meghan later added that she is now 'doing really well', and said: 'The past few months have been layered for everyone, we certainly can't complain, we are fortunate we all have our health, we have rooves over our heads.'

Harry added: 'The unique part of our work is whatever you're going through and whatever other people are going through, it's all relative to that environment that they're in.

'For the majority of people I've spoken to in London, or in the UK, have been stuck in high-rise blocks of flats, unable to see any open grass or open green space.

'We've felt incredibly grateful and fortunate to be able to have outdoor space where our son can walk his first steps. Outdoor space where he can just have enough space to run and move around. It's a huge blessing.

The Duke of Sussex said: 'I think putting your self-care as a priority is hugely important, because vulnerability is not a weakness, showing vulnerability in today's world especially, is a strength. 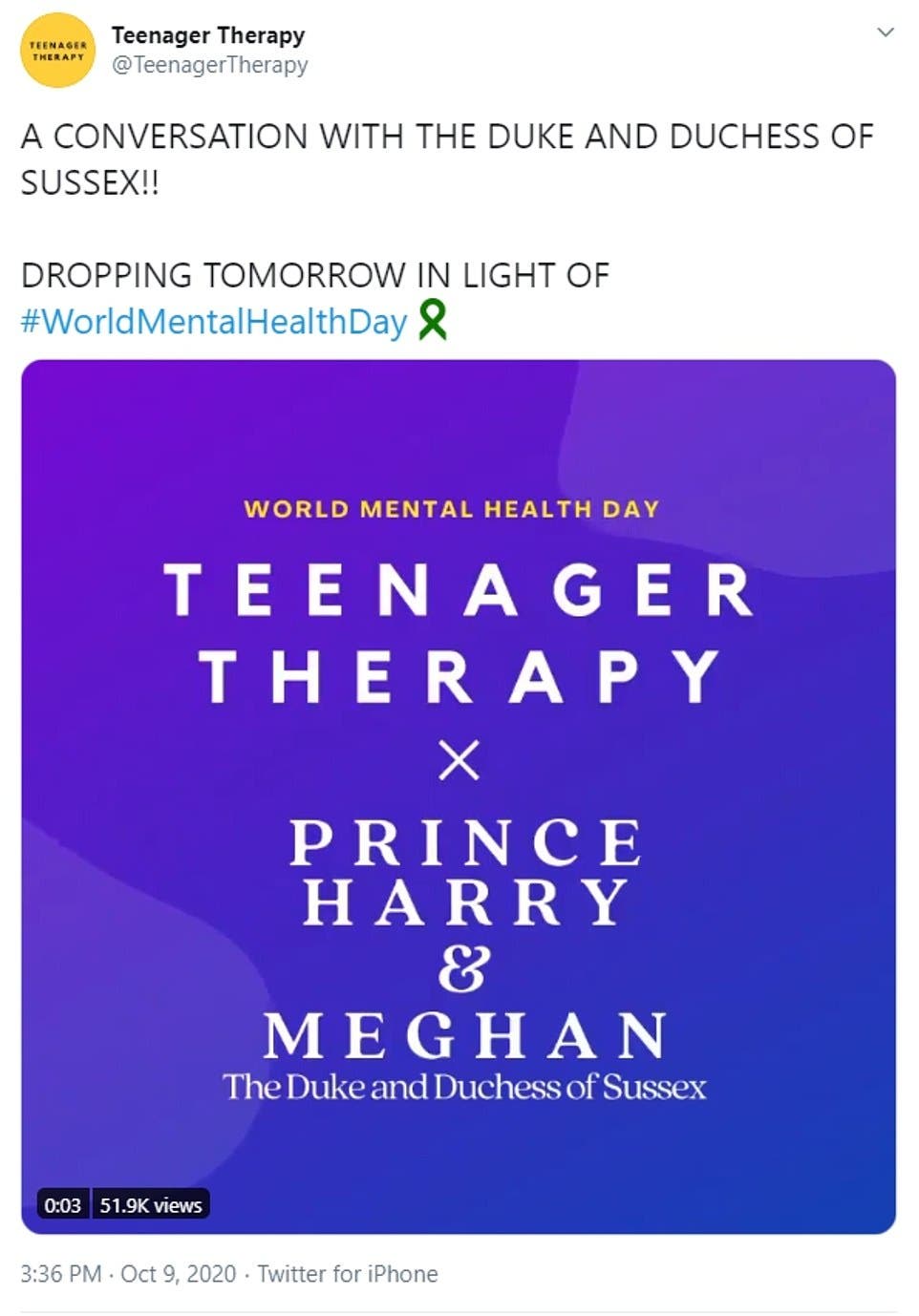 'We could certainly see that more from some of those global leaders, because we got ourselves into this very deep hole which we need to come out of.'

Harry praised the teenage hosts and the younger generation for their openness surrounding mental health and personal difficulties, later telling the podcast that he meditates.

He added: 'Our situation is somewhat unique but then every single person's situation is unique, it's a different version of the same thing.

'For Meghan, she said on a global scale, that's what happened in 2019, but if you're a young girl or young boy at school, that's your world, so if you're being attacked, or being bullied or whatever is online... it feels the same.'

Harry said: 'I think it's very easy to be sucked in and consumed by negativity, but we all have the choice to be able to cut that out of our lives.

'Hate following has become a thing, you don't need to do that. Just as much as we worry about, be concerned, and take notice of what we put in our bellies as a diet, the same applies for our eyes and our mind, what we're consuming is affecting us.

'For me, I made the choice not to read it, not to see it, and to remove myself from that, and to very much focus on the uplifting and the hopeful side.'

He added: 'What I've seen so much over the years is people hiding behind usernames on the online space. There are things that are said digitally that nobody would say in person, of course.

'But I think there's a lot of projection that happens as well, I think many. many people are hurting, a lot, and are freaking out because of the way the world is and because of, sometimes, the echo chamber that has been created for them by the online platform that they've chosen to be on.

Meghan later discussed an interview with ITV's Tom Bradby as part of her tour of Africa that she filmed last year, which gained significant attention.

'We were on a tour in South Africa and on the last day of the tour, man I was tired. I was just about to give Archie a bath and I was exhausted.'

Harry said she was breastfeeding at the time, to which Meghan added: 'A lot of people don't know, it's like running a marathon, so between every official engagement I was running back to make sure our son was fed, and it was a lot.

'At the very end the journalist asked me 'well, are you OK?' and I didn't realise that my answer would receive such an interest from around the world, because I said 'well thanks, people haven't really asked me if I'm OK'.

'I didn't think about that answer, I just answered honestly, because I was in a moment of vulnerability because I was tired, because there was no presentation, it was just 'here's where I am, I'm a mum who is with a four-and-half-month-old baby and we are tired'.

'But I think it speaks to the fact that the reason it resonated with people is because everyone wants to be asked if they're OK.'

When asked about their recent activism, Harry said: 'I think the way everything's happening in the world right now, the moment that people start to think about mental health, immediately people think about a small group of people as opposed to every single one of us.

'Rather than mental health being focused on, the people that are struggling, it needs to go much wider than that, and to the acceptance and the appreciation that every single one of us have mental health, and every single one of us have got stuff going on that we either need to talk about or that we need help with, or that we have some form of compassion and empathy for other people that are going through something similar.'

The Sussexes learned about the podcast - which usually features five students from Loara High School in Anaheim, Orange County - after reading a New York Times profile of the teenagers in July.

After listening to a few episodes of the series, they decided they wanted to support the teens' work. They recorded the episode this week in their new hometown of Montecito, with all the participants wearing masks during the recording.

According to Hello! magazine, Prince Harry and Meghan led the group in deep breathing exercises ahead of the podcast in order to help sooth nerves.

Meanwhile when one of the young hosts, Gael, asked the couple what they would like to be called, the Duke told him 'anything is fine', to which Gael decided to call him 'Big H'.

The Duke has long been open up about his struggles with mental health, and revealed he needed counselling after the death of his mother, Princess Diana.