Naya Rivera Gets Left Out of The Oscar's In Memoriam Segment

Naya Rivera, Jessica Walter, Adam Schlesinger and Tiny Lister were among the notable names omitted from the In Memoriam segment at the Academy Awards on Sunday.

A number of users on social media sounded off about the exclusions following the somber segment, which featured a fast-paced montage of names of those who had died in the year since last year's ceremony, set to Stevie Wonder's As.

Rivera, best known for her role on Glee, had appeared in films including the 2017 comedy Mad Families and in the 2014 movie At the Devil's Door. She died last July in an accidental drowning while she was out on a pontoon boat ride with her son in Lake Piru, California.

Rivera's omission hit and especially tender nerve with fans after she was left out of the Grammys tribute earlier this year.

One fan wrote, 'Since the academy, along with the grammys, decided yet again not to include naya rivera in the tribute section of their 3 hour long show, we again have to do it for them. you’re with us forever and your talent / legacy will span beyond generations. i love you.'

Another fan added, 'They are foul for not putting Naya Rivera in the in memoriam,' while someone noted, 'I was fully expecting to see Naya Rivera’s name in this segment. Was I the only one?' 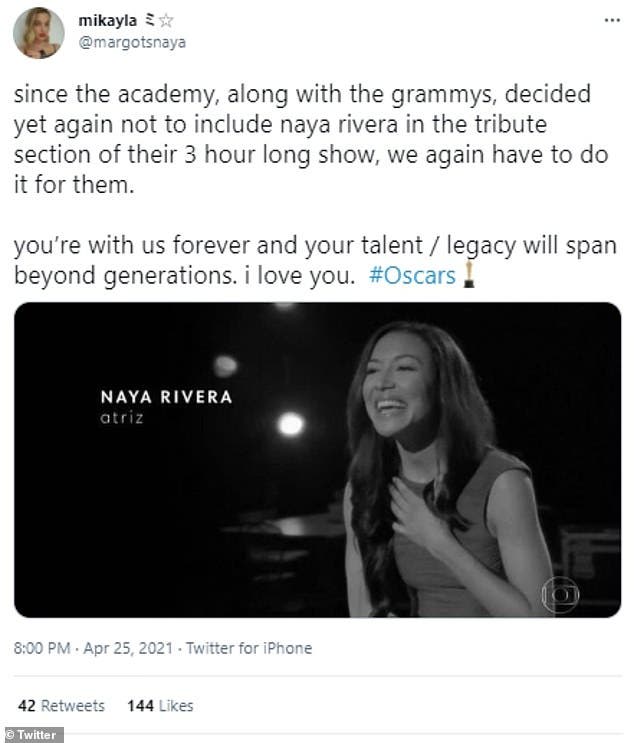 Walter, who died last month at 80, was best known for her role on the show Arrested Development, and had films on her resume including the 2020's The Mimic, 2012's Bending the Rules, the 1998 comedy Slums of Beverly Hills and 1971's Play Misty for Me.

Westworld actress Shannon Woodward wrote, 'Where was Jessica Walter???' while another user added, 'The In Memorium section of the #Oscars is always rough, but how on earth did they not include Jessica Walter.'

Also left out was Fountains of Wayne singer Adam Schlesinger, who had been nominated for Best Original Song for That Thing You Do! in 1997. Schlesinger died at 52 in April of 2020 from coronavirus complications.

Writer Andi Zeisler said, 'Me realizing the In Memoriam segment excluded both Jessica Walter and Adam Schlesingerr' with a meme of Walter. 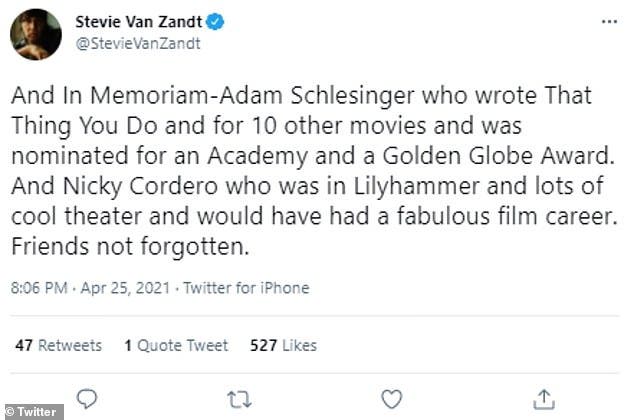 Famed musician and The Sopranos star Stevie Van Zandt was also among those to note the absence.

'And In Memoriam-Adam Schlesinger who wrote That Thing You Do and for 10 other movies and was nominated for an Academy and a Golden Globe Award,' Van Zandt said. 'And Nicky Cordero who was in Lilyhammer and lots of cool theater and would have had a fabulous film career. Friends not forgotten.'

Another said, 'No love for Adam Schlesinger during the In Memoriam? 'Jersey kid who wrote the greatest fictional rock song of all time. Damn.'

A user wrote, 'I know every year they miss some people in the In Memoriam, but not including Adam Schlesinger is a REALLY big miss.'

User Russ Zimmer noted a number of cinematic turns for Lister in fuming over his omission.

'The In Memoriam segment forgot Tommy “Tiny” Lister, and I’m a little pi**ed! Friday, Jackie Brown, The Dark Knight - what more do you need to do?'