Published August 10th, 2021 - 10:15 GMT
Neither Schwimmer nor Aniston have confirmed the rumours.
Highlights
Jennifer Aniston and David Schwimmer spoke upon their previous crush on one another during the Friends reunion

While playing on-screen lovers from 1994 until 2004, the Friends co-stars recently came together at the Friends reunion revealing they had a mutual ‘crush’ on one another.

A source said: “After the reunion, it became clear that reminiscing over the past had stirred up feelings for both of them and that chemistry they’d always had to bury was still there.”

Schwimmer who played Ross on the famous sitcom Friends told host James Corden, “I had a major crush on Jen,” before Jennifer confessed, “It was reciprocated.”

David then said: “We were both crushing hard on each other, but it was like two ships passing. One of us was always in a relationship and we never crossed that boundary.”

Jennifer also commented on the situation, "I remember saying one time to David, ‘It’s going to be such a bummer if the first time you and I actually kiss is on national television.’ And sure enough, it was.... We just channelled all of our adoration and love for each other into Ross and Rachel.”. 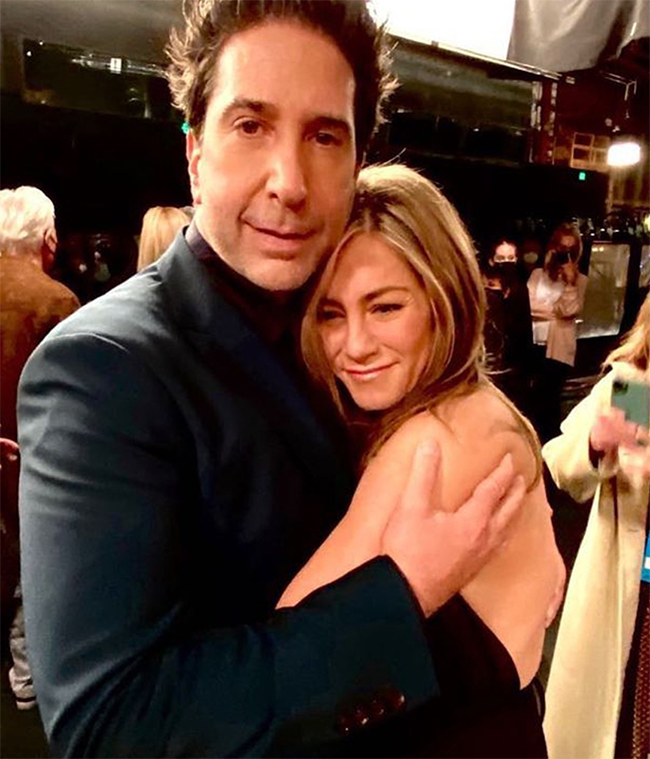 A source claimed to Closer magazine that Jennifer and David have been secretly dating ever since the Friends 25th-anniversary special.

"They began texting immediately after filming and, just last month, David flew from his home in New York to see Jen in LA.

"They've been spending time at Jen's home, where she's cooked dinners in the evenings, and have enjoyed quality time together, chatting and laughing." The source noted.

Neither Schwimmer nor Aniston have confirmed the rumours.

Friends fans blew up social media platforms expressing their excitement for the alleged romance, scroll down for their reactions!

Me when I heard that David Schwimmer and Jennifer Aniston are rumoured to be dating pic.twitter.com/5SeqdjaUD4

He's always been her lobster 🦞❤️

Jennifer Aniston and David Schwimmer are rumored to be dating 😱❤️ pic.twitter.com/rSie4Wk9UH

Omg if the rumour that David Schwimmer & Jennifer Aniston are dating is actually true ….. pic.twitter.com/9HDc1vmBPt

Me after reading that two millionaires who I’ve never met (Jennifer Aniston and David Schwimmer) are rumoured to be dating. pic.twitter.com/zehwVmzleu

if it’s true that jennifer aniston and david schwimmer are dating perhaps I finally believe in love pic.twitter.com/T9IQhXu8gR