Tiffany Trump's billionaire fiancé Michael Boulos proposed to her with a 13-carat emerald-cut diamond from Dubai that is believed to be worth up to a staggering $1.2 million.

In exclusive pictures obtained by DailyMail.com, Tiffany, 27, is seen proudly showing off the stunning ring, which was designed by New York-based jeweler and diamond dealer Samer Halimeh, who works 'for the one per cent of the one percent'.

A spokesperson for Samer Halimeh New York revealed that the knockout ring features a massive emerald-cut center stone flanked with two trapeze cut diamonds. The jeweler is keeping the price of the ring tightly under wraps; however, an independent expert estimated that it is worth more than $1 million. 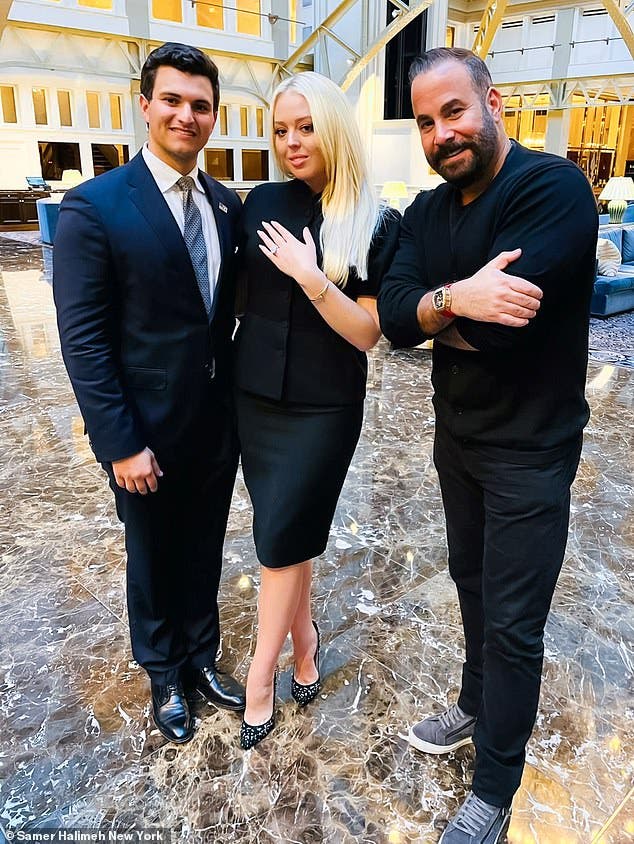 Michael, the 23-year-old heir to the multi-billion dollar Nigerian conglomerate Boulos Enterprises, flew to Dubai with Halimeh to choose the ring, which he selected and purchased in the city.

Photos that were taken after the engagement show 27-year-old Tiffany and Michael posing with Halimeh at Trump International Hotel Washington, D.C.

In each picture, the blushing bride-to-be can be seen holding up her manicured ring to show off her incredible ring. 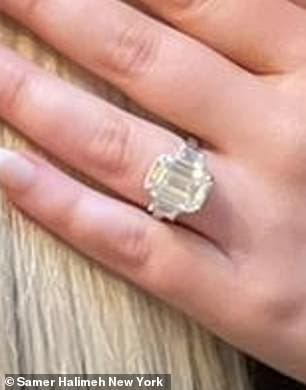 The makeup Tiffany had on earlier in the day is wiped off her face in the photos, which suggests she made have shed some tears of joy when Michael popped the question.

The ring's center diamond has an H color grade, meaning it has a faint yellow hue in comparison to stones with higher grades. The highest color grade is a D, though these colorless stones are rare to find. 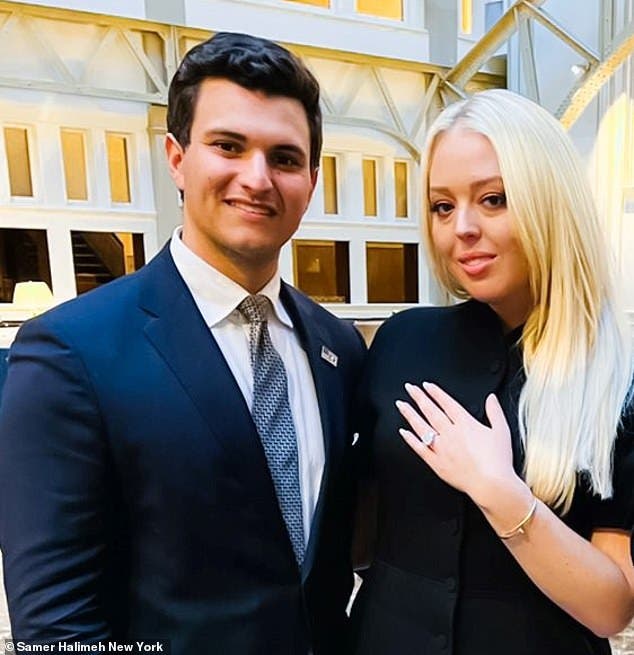 The stone also boasts a VVSI clarity grade, which is close to perfect. VVS stands for 'very, very slightly included.'

Denis Stepansky, founder and owner of online luxury retailer ItsHot Diamond Jewelry and Watches, told DailyMail.com that a ring similar to Tiffany's would cost $1 to $1.2 million.

'This is a high-quality diamond with a high carat weight, which seems about right for Tiffany’s celebrity status,' Stepansky said.

Michael also likely had to pay a hefty customs duty tax when he brought the ring from Dubai to the U.S. to pop the question to his bride-to-be. 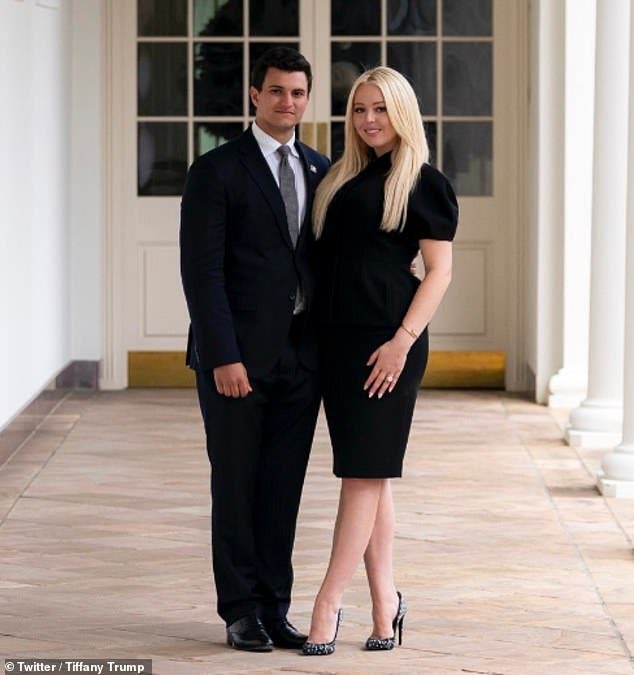 When designing Tiffany's ring, Michael made sure he was working with one of the most famous names in the diamond business.

Halimeh caters to royals and celebrities such as Oprah Winfrey, Sir Elton John, and Naomi Campbell as one of the world's leading diamond traders, and it appears Tiffany is a long-time fan of his work.

Tiffany and Michael were spotted browsing engagement rings at the Samer Halimeh New York store in London in June 2019, but she only picked up a $663,000 diamond 'friendship' bracelet while at the jeweler's Knightsbridge location.

Speaking to the Evening Standard, the manager of the store, Maan Chakhchir, said the couple is 'very down-to-earth and clearly very happy together.' 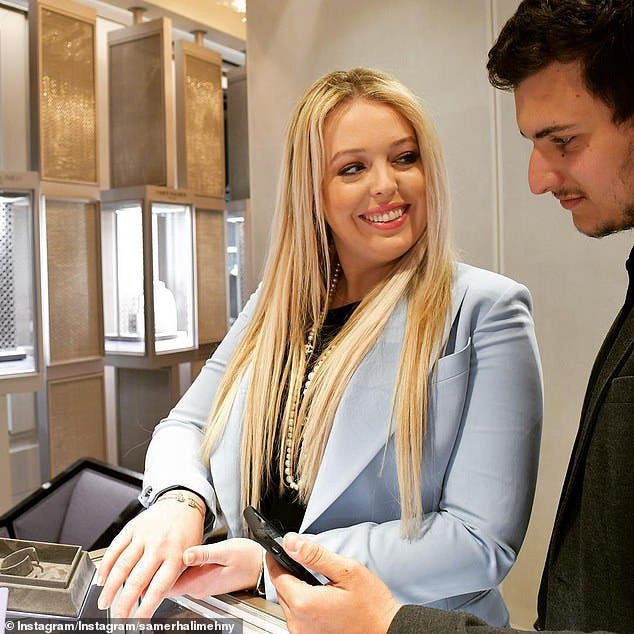 'They seem very much in love. If they get engaged, I know that Mr. Halimeh would be perfect for designing the ring,' he said at the time.

The couple announced their engagement today, with Tiffany having seized the opportunity to snag a final White House photo with Michael before her father, President Donald Trump, leaves office on Wednesday. 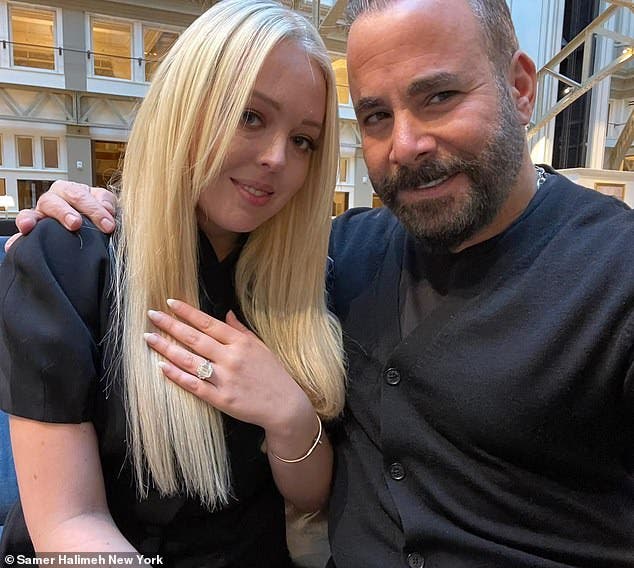 In her post, the Georgetown Law graduate described the engagement as her most 'special' White House memory, while paying tribute to her 'amazing fiancé,' whom she has been dating for just over two years.

'It has been an honor to celebrate many milestones, historic occasions and create memories with my family here at the White House, none more special than my engagement to my amazing fiancé Michael!' she wrote. 'Feeling blessed and excited for the next chapter!'

A source told Page Six that Michael proposed to Tiffany in the Rose Garden at the White House over the weekend after they flew in from Miami, where they've been staying. 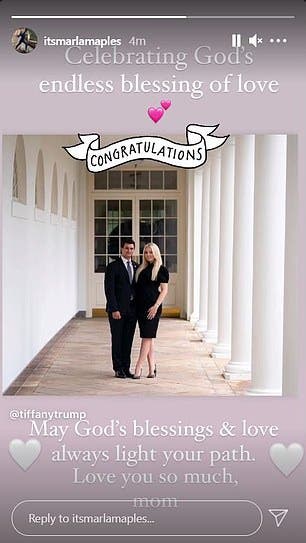 'The family is delighted,' the insider said.

In the photo Tiffany shared to announce the news, the newly-engaged couple is seen posing together in the West Wing Colonnade, with their arms around each other, as she shows off the massive diamond engagement ring that Michael gave her.

The bride-to-be is dressed in a classic short-sleeved dress, which she accessorized with sparkly black heels. Her long blonde hair is styled straight and loose around her shoulders as she smiles for the camera.

The business development manager was born in Lebanon and grew up in Nigeria before moving stateside to be with Tiffany. Michael responded to her engagement post in the comments, writing: 'Love you honey.'

He also proudly announced the joyous news on his Instagram page using the same photo from the White House, likely the last image that the couple posed for before Trump's presidency comes to an end.

'Got engaged to the love of my life! Looking forward to our next chapter together,' he captioned the photo.

It's unclear if Michael asked President Trump for his youngest daughter's hand in marriage, though a source told Page Six it's 'highly likely' considering the proposal took place at the White House.

Eminem's Adopted Daughter Opens up About Therapy Helping Her