Israeli embassy in US Tweets some Scarlett Johansson love

The Twitter support came after the commercial was the subject of controversy after Johansson’s appearance was criticized by the international charity Oxfam, for whom the actress has served as an ambassador for the last eight years.

SodaStream, a company that produces equipment to make carbonated drinks, has been criticized by pro-Palestinian activists due to its operating a factory in Israeli settlements in the occupied West Bank. 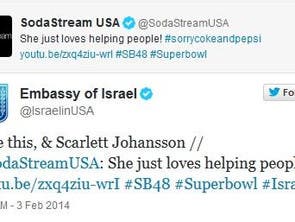 Oxfam has spoken against companies which operate in settlements, which it says “further the ongoing poverty and denial of rights of the Palestinian communities that we work to support,” The Guardian reported.

“While Oxfam respects the independence of our ambassadors, Ms. Johansson’s role promoting the company SodaStream is incompatible with her role as an Oxfam Global Ambassador,” an Oxfam statement obtained by Al Arabiya News said.

“Oxfam believes that businesses such as SodaStream, that operate in settlements, further the ongoing poverty and denial of rights of the Palestinian communities that we work to support.”

Johansson stepped down as a spokesperson for the humanitarian group, citing “a fundamental difference of opinion” over the boycott, divestment and sanctions movement targeting Israel.

A one-minute slot for a commercial during the Super Bowl can reportedly cost up to $4 million and is highly sought after by brands from around the world.