Published February 24th, 2021 - 08:43 GMT
the superstar recently introduced her 124 million fans and followers on Instagram to her adorable new adopted dog.
Highlights
Miley Cyrus is not afraid to cause a little controversy - and on Tuesday night, she posted a rather daring Instagram snap.

The singer, 28, shared a couple of pictures of herself wearing nothing but a Motley Crue tank top, revealing some sideboob in the process.

And advocating a little self-love, placing her hand between her legs, she wrote: 'Self sex is safe sex.'

Miley's shirt was tucked between her legs in the daring snaps as she preserved her modesty.

She also wrote: 'Play board games. Not mind games,' concluding with a bone emoji.

Meanwhile, the superstar recently introduced her 124 million fans and followers on Instagram to her adorable new adopted dog.

And on Tuesday, Miley Cyrus continued to post content with the gray and white pooch, whose name is Angel, to her Stories. 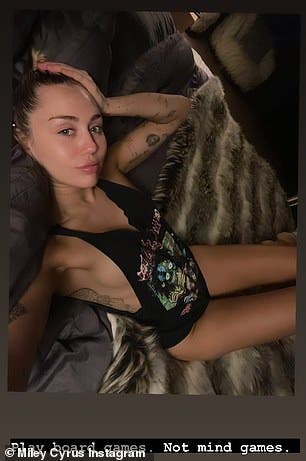 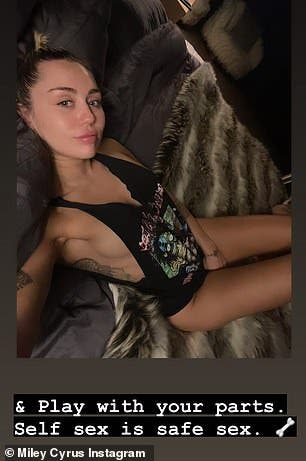 The Plastic Hearts hitmaker, 28, sat in the driver’s seat of her car in the image, wearing a white sleeveless graphic T-shirt.

She had her mouth open, with what looked to be chewing gum on her tongue.

Behind her, Angel looked at the camera as well, panting with his tongue out.

Miley wore a black trucker hat and had several necklaces layered around her neck.

She added an electric guitar icon along with a BFF heartbreak necklace to the IG story entry.

She captioned the picture cheekily, '2 pitties who love t*tties' and added a skull and crossbones emoji.

The former Hannah Montana star adopted Angel after the death of her beloved dog Mary Jane in January.

As she introduced Angel to her social media followers, she wrote: 'Almost two months ago my best friend a rescued pit mix Mary Jane left this world. I knew she wasn't gone for good. 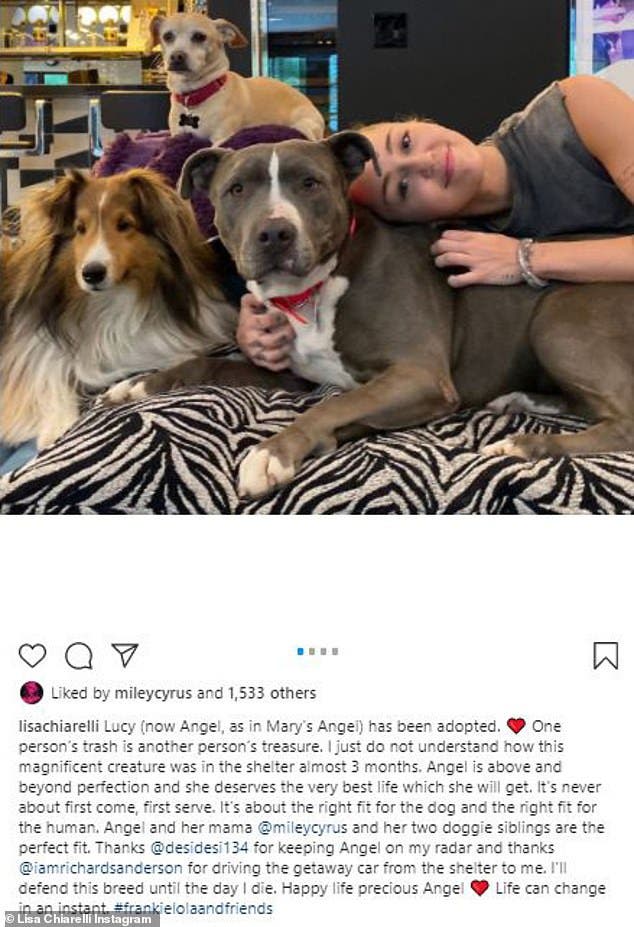 'She had out lived the body she was in but she never said goodbye ..... with her eyes she whispered "See you soon Bestie". Mary Jane defined loyalty and would never break a promise.'

The We Can't Stop songstress added: 'I feel her here with me blessing this new member to my family who's name is "Angel" because she was delivered to me by one... My Mary.

'It breaks my heart to know Angel was sleeping on concrete in a shelter for 3 months before finally making it home.'

Experts Predicts 10,000 New Millionaires in UAE Every Tear till 2025

Pakistan is Ready for FATF As Meeting Approaches

War Crimes! How Does The UN Exactly See Its Stand on Syria?