The Egyptian security services found the body of the Egyptian broadcaster, Shaima Gamal, who disappeared 3 weeks ago.

The security services found the body of the journalist inside a villa farm in one of the cities of Giza Governorate, while investigations suggested that her husband was behind her murder.

Investigations revealed that disagreements arose between the media personality and her husband after she threatened to tell his first wife of his marriage to her, and it was found that the Gamal went out with her husband to buy some supplies, and then asked to wait for her to style her hair in a hairdresser in Sheikh Zayed, but she did not return - according to the husband's statements - who made a report inside the police station.

The Giza Security Directorate had received a report stating that Shaimaa Gamal, a TV presenter working on a private satellite channel, had been missing, as she was presenting a program entitled “The Troubleshooter.”

She disappeared in mysterious circumstances 20 days ago, and no one knows her whereabouts until now, and all her phones are switched off.

The security services intensified their efforts to uncover the circumstances of the incident, as they listened to the statements of her family, friends and acquaintances, and traced her last phone calls to find out her itinerary.

Shortly after, it was revealed that Shaima Gamal had her face distorted used nitric acid and fire water and was eventually murdered by the hands of her husband, Judge Ayman Hajja, who is the Counselor and Vice-President of the State Council in Egypt. 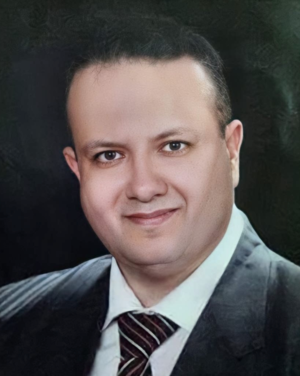 Yesterday, Shaima's sister told "Al-Asima" news: ''No one from the family doubted that he had killed her, because he was telling us that he was sad and worried about her, and she added that she had called him several times, “since we learned the news, but all his mobile phones have been turned off, and no one knows his whereabouts now.”  It is reported that Hajja has fled the country.

Later on, the police knew from his driver the place where Hajja buried Gamal  buried her in a villa  in "Abusir" area in the "Al-Badrashin" police station district.

He brutally murdered her by hitting her on the head with the grip of a pistol, then strangling her with a scarf and burying her after mutilating her face in the villa located in the Mansouriya area.

The killer is the deputy of the State Council Judges Club concerned with judges affairs, and for years, he served as the spokesperson for the operations room of the State Council Judges Club to supervise and follow up since 2015 on the elections to the House of Representatives in all governorates, and he was also among the strong candidates to take over the management of the Zamalek Club after Counselor Ahmed Al-Bakry was infected with the coronavirus.