The UN and toilet seats: Syrian art in Beirut 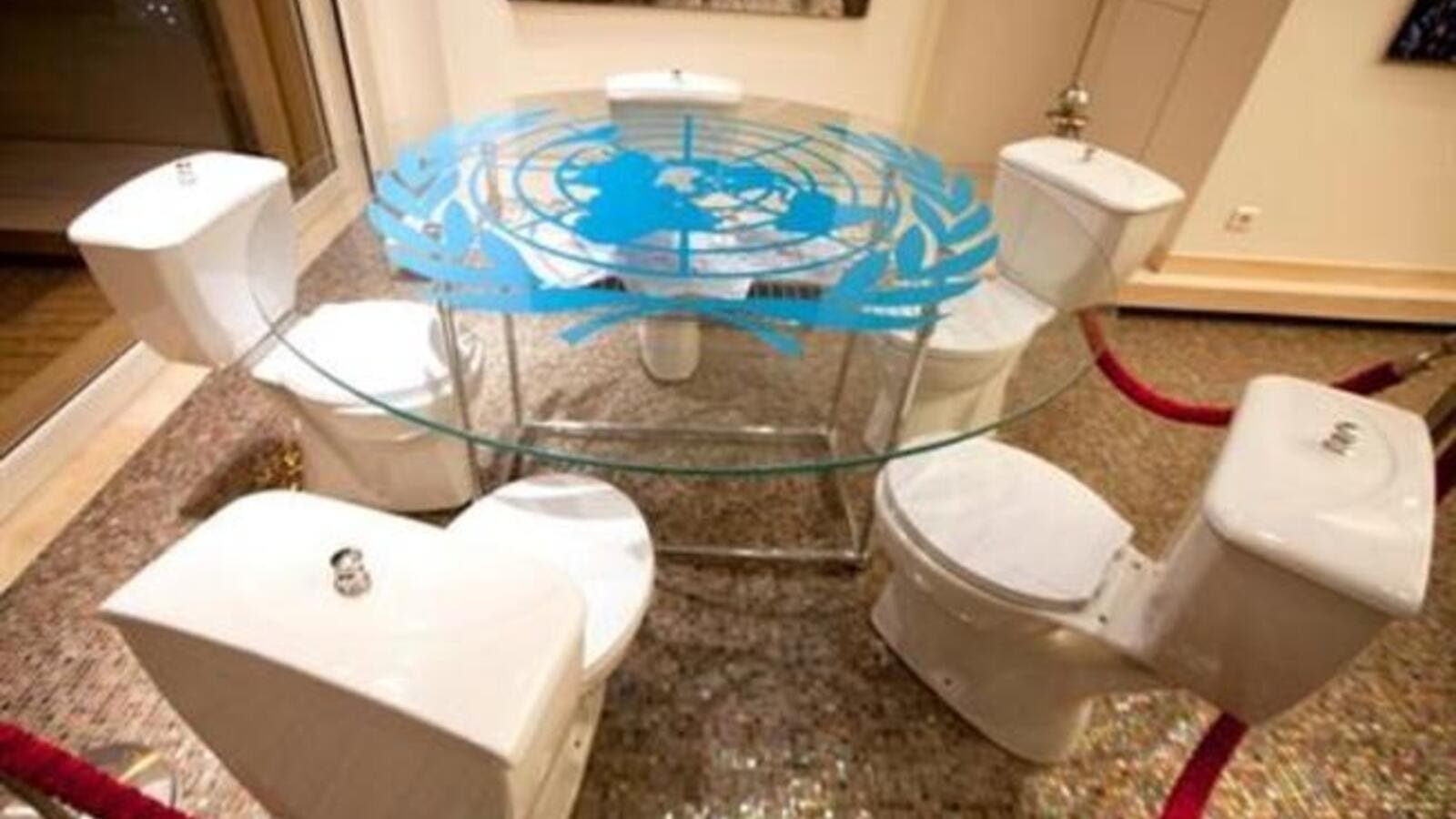 The turmoil roiling through the Middle East lately has been a source of inspiration for many artists. Syria’s Thaer Maarouf is among them. His most recent works are now up at Galerie Piece Unique, in an exhibition entitled “Veto.”

Maarouf’s works have been exhibited at ArtDubai, the city’s art fair, and at Singapore’s recently opened Sana Gallery. Part of the “Afak” exhibition series founded by curator Razan Chatti, “Veto” consists of 25 mixed-media works along with one unusual installation.

This installation – after which the exhibition is named – consists of a round glass table stamped with the U.N. logo and surround by five toilet seats. On a shelf underneath that table, onlookers can see papers with the word “Veto” written on them in red capitals.

The relationship between the United Nations and the word “veto” should be transparent enough – the latter having become a metaphor for the ineffectualness of the former. The washroom artifacts, however, may be somewhat more obscure.

“[My work] is about the veto decision,” Maarouf told The Daily Star at the show’s opening, “and on how it is not a democratic decision.” He went on to explain how one official figure makes a decision while the four others cannot vote.

Placing toilet seats about the table rather than conference chairs, say, is a fairly explicit expression of the artist’s point of view.

Accompanying this installation is a black-and-white self-portrait in which the artist is represented with a clothes peg pinching his nostrils closed, suggesting something of the symbolic odor arising, as the curatorial essay says, from such “one-sided resolutions that do not consider or respect ... freedom of human self-determination.”

Maarouf’s 130x130 cm mixed-media work “Give Me Freedom” shows an old T-shirt affixed to the black background of the canvas. On this T-shirt the onlooker can easily recognize U.S. President Abraham Lincoln – who issued the Emancipation Proclamation in 1863, which abolished slavery in his country – decked out in shades.

Some onlookers may detect a link between Lincoln’s best-known political gesture and Maarouf’s desire that his native Syria taste some of the same freedom. Framing Lincoln’s portrait is a line of Arabic calligraphy, made up of lyrics from one of Oum Kalthoum’s songs of freedom.

All Maarouf’s work is preoccupied with what is happening in Syria.

“I don’t paint the war,” he writes in the exhibition catalogue, “but I indicate the pain left by [it].”

Sodom and Gomorrah are well known from an episode in the Book of Genesis, in which the Hebrew people were allowed to flee divine judgment upon the two sinful cities. Here, a city (presumably a Syrian city) has been reduced to ruins, while in the foreground a crow is evidently enjoying the vista of destruction spread before it.

Maarouf’s work is not without humor, however.

In “Asinus Asinum Fricat,” 130x130 cm, the onlooker finds a donkey-faced man riding a donkey. The Latin title translates as “The donkey rubs the donkey,” a well-known expression mocking sycophancy.

One has red eyes – perhaps from weeping? Another is without a mouth – as though censored. A third holds an axe, while another looks like the devil. Maarouf leads onlookers through an eerie – at times frightening – series of vistas of the home that has provided so much inspiration.