Published April 6th, 2021 - 09:03 GMT
The Kardashian team are working hard to remove all traces of an 'unauthorized' photo
Highlights
The Good American founder appears unfiltered, un-airbrushed and not as flawless as she appears in campaign shots for her fashion brand

The Kardashian team are working hard to remove all traces of an 'unauthorized' photo of Khloe Kardashian that emerged on social media over the weekend.

The Good American founder appears unfiltered, un-airbrushed and not as flawless as she looks in campaign shots for her brand.

Soon after it leaked on various forums online, members of the Kardashian PR team reported the posts as copyright infringement, due to the photo being posted without permission.

In the candid image, which is still up on one subreddit, the mother-of-one appears to be mid-conversation and has her hair pulled up in a ponytail as she holds her phone and flashes a subtle smile at the photographer.

The image seems to have been snapped at Kris Jenner's desert compound in La Quinta, California, where the Kardashian and Jenner clan just spent the Easter weekend. 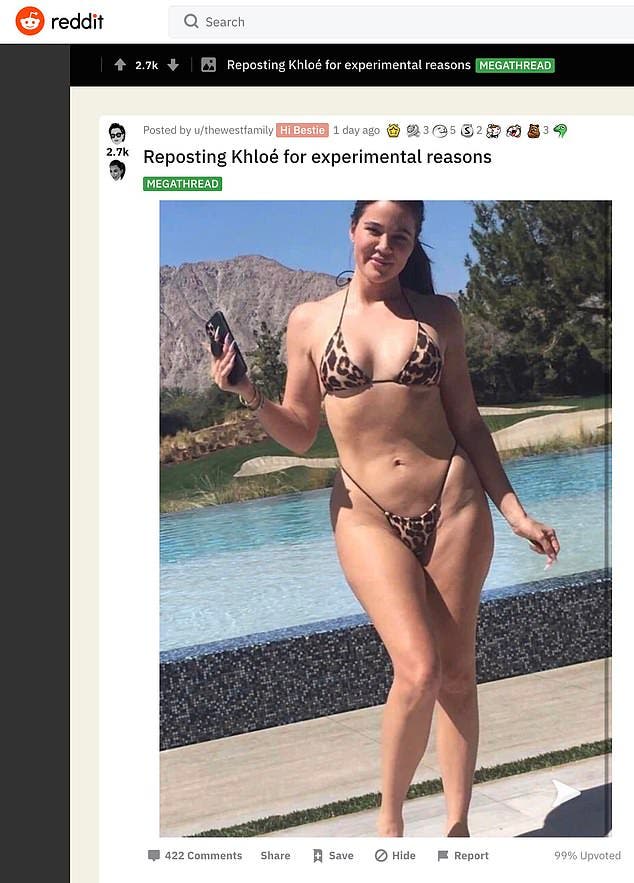 While most would be proud to look so good in a bikini, it's not hard to see that Khloe looks very different to her highly glamorized Instagram images.

In the alleged unedited snap, her waistline appears less defined, her curves less dramatic and her skin not as impossibly smooth as it looks in her carefully staged glossy fashion shoots. 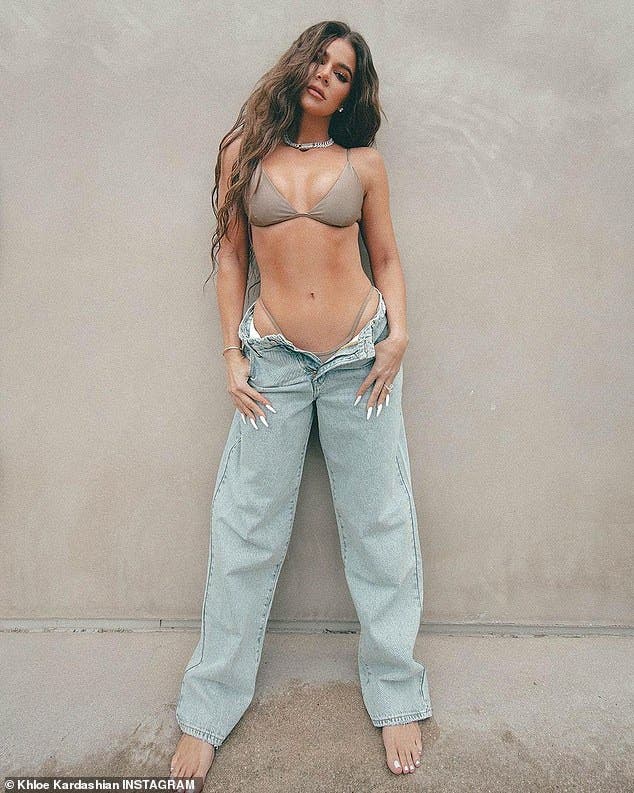 Tracy Romulus, Kim Kardashian's BFF and chief marketing officer for KKW brands, said in a statement to Page Six : 'The color edited photo was taken of Khloé during a private family gathering and posted to social media without permission by mistake by an assistant.

'Khloé looks beautiful but it is within the right of the copyright owner to not want an image not intended to be published taken down.'

The mistake could well cost the assistant their job, as the Kardashian team have been unable to contain the leak.

After the photo surfaced on Saturday it spread across the internet before quickly disappearing on many sites.

It wasn't long before reports emerged from Reddit users who were asked to take the photo down, with some allegedly receiving legal threats from the Kardashian team because of 'copyright infringement'. 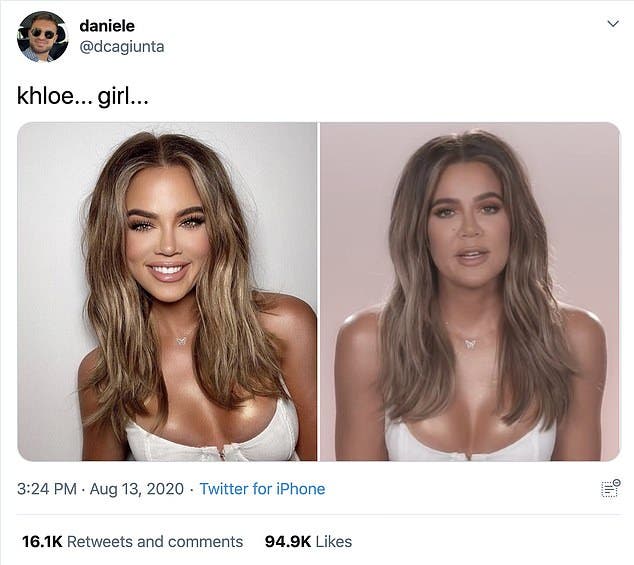 A user named 'Calithetroll' started a subreddit to discuss the Kardashian PR team's attempt to remove all of the posts online. They explained that 'after reposting the picture, the mods confirm that someone reached out to them warning them about potential legal action due to the picture.'

Some people, including subreddit moderators who attempted to share the Khloe photo, were reported for posting 'personal and confidential' information.

It's unclear how the photo originally leaked online. There is some speculation on Reddit that it was Kris Jenner's mom MJ that posted it on her 'finsta' which is the term used for a 'fake Instagram' created by users to share more candid snaps with only with their closest friends and family.

Khloe has come under fire in recent years for her changing face and body, with many accusing the KUWTK star of brazenly photoshopping her Instagram posts to an extent fans sometimes struggle to recognize her.

Following a slew of questions from fans, cosmetic and injectables specialist Claire McGuinness weighed in on the discussion, offering her opinion on what changes Khloé may have made.

She speculated that the mother-of-one had changed her appearance so dramatically thanks to a combination of 'surgery, injectables, weight loss... and filters, makeup and lighting'.

However, sources insisted that Khloe is not concerned with the backlash over her changing looks.

An insider told UsWeekly back in May: 'Khloe doesn't care about the backlash she's been getting from fans saying she doesn't look like herself in her recent photos.'

'She thinks she looks great,' the insider adds. 'And actually [she] does not care what people think as long as she's happy.'

She's certainly having a sense of humour about it at least, after clapping back to fans who have questioned her new look.

After being asked by a fan 'Why do you look so different in all your photos?', Khloe hit back: 'My weekly face transplant clearly.'

Khloe's changing appearance has undoubtedly been controversial in recent months, but she has denied going under the knife to achieve her new look.

In 2016, Khloé admitted to having fillers to change her facial shape, and in the same year she was made the face of Kybella and its Live Chin Up campaign.

She has admitted to getting Botox and fillers in the past but said she had them dissolved after feeling like she looked 'crazy.'

To this day, Khloé maintains she has never had a rhinoplasty, and says her nose looks slimmer because of contouring.

In 2013, she told Cosmopolitan magazine that she had never had cosmetic surgery but did not rule it out for the future.

'I’m proud for losing weight when I wanted to and I’ve never resorted to surgery,' she said. 'I’m not against it - one day I probably will but it would be on my terms. I won’t be bullied into it by social media or anyone else.'

Back in September, the star told People that she thrives on changing her appearance.

'I never like to stick with one look for too long. Short hair, major glam, bright lips - you name a look, I've tried it.

'You get to be a different character every single day and experiment. To me, beauty should be anything but boring. It's a form of self-expression. There's really no right or wrong, it's more about how it makes you feel.' 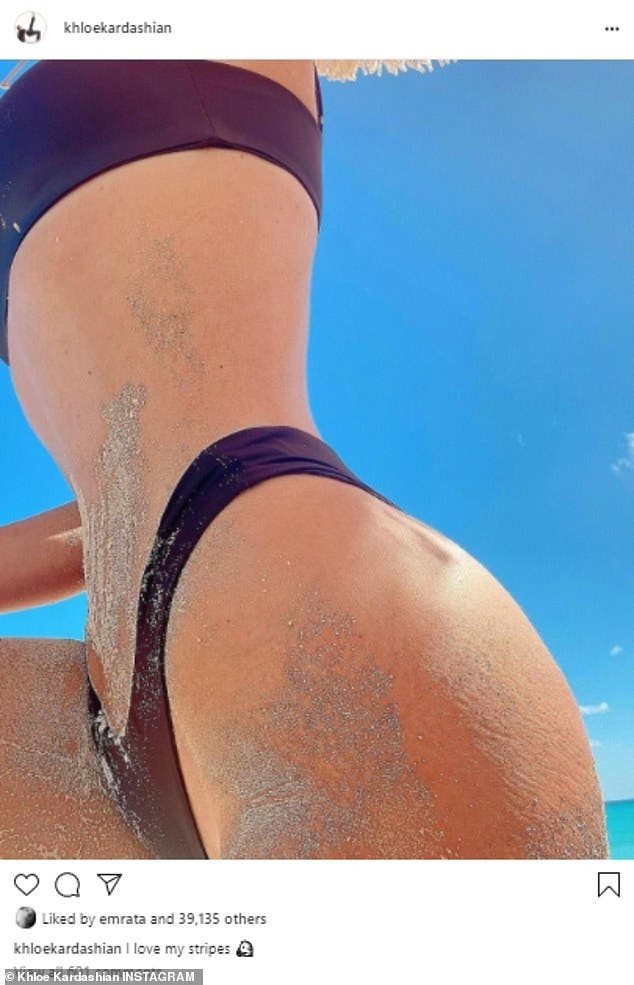 She also spoke about her decision to go back to brunette after a stint as a blonde and she is having 'a lot of fun' with her new look.

She shared: 'I'm having a lot of fun as a "new" brunette. I love to change things up whenever I'm getting too comfortable with a look. It's whatever makes you feel more playful and daring.'

However, in February the E! star got real about her stretch marks as she shared a beach snap of her hips covered in fine lines declaring 'I love my stripes'.

North Korea Not to Participate in Olympics Over COVID-19 Concerns