Published February 3rd, 2021 - 07:03 GMT
As the rising ideologies of isolationism and nationalism continue to hold sway across the globe, the negative effects of competitiveness between nations rather than cooperation can be seen in Central Asia’s water and electricity problem.

At the end of last year, Tajikistan, an ex-Soviet republic on the northern border of Afghanistan and to the west of China, was forced to ration electricity supplies for the first time since 2016. Historically, the careful balance of supply and demand for water and electricity across Central Asia was met through cooperation between a set of countries rich in fossil-fuels but with dry climates, and a set of neighboring countries with large amounts of water but lacking in electricity generation methods.

However, the selling of natural resources to the highest bidder has left those water-rich states in need of electricity, especially during the winter months, facing an energy crisis. In response to these pressures,  water-rich Tajikistan has restarted the construction of Rogun Dam, an enormous hydroelectricity project that could supply enough power to fill a void in the country's supply. The dam hopes to be the highest in the world, standing at 335-meters on the Vakhsh River in the Pamir mountain range. However, it threatens fossil fuel-rich Uzbekistan.

The story of Rogun Dam is a warning of the risks of further segmenting natural resources along national borders.

A History of Water and Electricity Cooperation 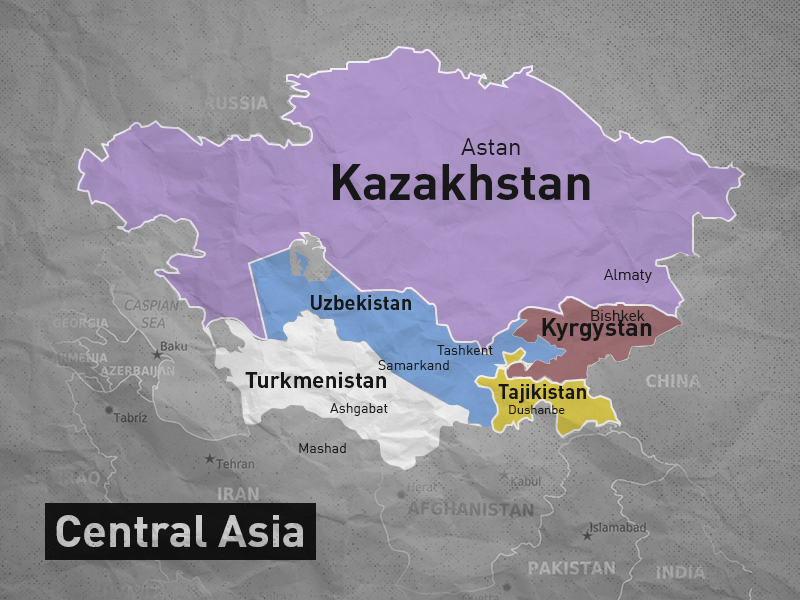 Central Asia shouldn’t be short of water or electricity.

It worked relatively well. There was enough food being produced to feed the Soviet Union and even enough to export further afield, whilst those in the higher-altitude, water-rich countries had enough electricity to stop them freezing during the winter months.

The cities and mountains in the eastern countries of Tajikistan and Kyrgyzstan are bathed in water. As you walk through Osh, water rushes on either side of pavements and roads in small trenches towards the Ak-Buura River.

The Fergana Valley, in which Osh is situated, is highly fertile. Alexander the Great founded a city there 2,300 years ago. Later, it is where the future Mughal Emperor Babur was born before traveling south through Kabul to eventually settle in India.

Tajikistan, too, has an abundance of water. Located on the western tip of the Himalayas, the country is almost entirely mountainous. The Abu Darya river basin, in which most of the state rests, feeds systems that run through the famous Silk Road cities of Samarkand and Bukhara.

Water features such as by Chehel Sotoun Isfahan showed man’s control over the environment generally and over water in particular.

Peter Frankopan, Professor of Global History at Oxford University, told Al Bawaba that “in some ways, the story of the Silk Roads IS the story of water. The networks criss-crossing Asia were enabled by the location of oases and water sources; the investment in the infrastructure of canals and irrigation systems were fundamental to the expansion of agriculture and to the rise of cities in individual regions and across the Silk Roads as a whole.

“So, it is not surprising that water, rivers, springs, and the joys they could produce – like ornamental gardens – are often depicted in painting, song, and poetry. Babur, the founder of the Mughal dynasty, waxed rhapsodically about his pleasure garden in Kabul and complained that the water in northern India was not plentiful enough for him to build another there. Water features such as by Chehel Sotoun Isfahan showed man’s control over the environment generally and over water in particular.”

However, the birth of regional nation-states after the fall of the Soviet Union in 1991 led to competition between the once cooperative Central Asian republics. The fossil fuel-rich downstream states of Uzbekistan, Turkmenistan, and Kazakhstan realized they could sell oil and gas to foreign buyers for much higher prices than selling to Kyrgyzstan or Tajikistan.

Uzbekistan started selling electricity to Afghanistan and the water-rich nations of Tajikistan and Kyrgyzstan were forced to divert water supplies to hydroelectric dams in order to produce electricity. In the winter months, however, when water flows are limited, electricity supplies run low. Hospitals and homes lose power. In the downstream states, crops fail.

In September 2019, Afghanistan signed a new 10-year deal with Uzbekistan for the supply of electricity. Technical problems, however, have remained and as the new year broke in Kabul for the beginning of 2021, the city saw, during one 24-hour period, only 20 minutes of electricity.

The Dream of Rogun 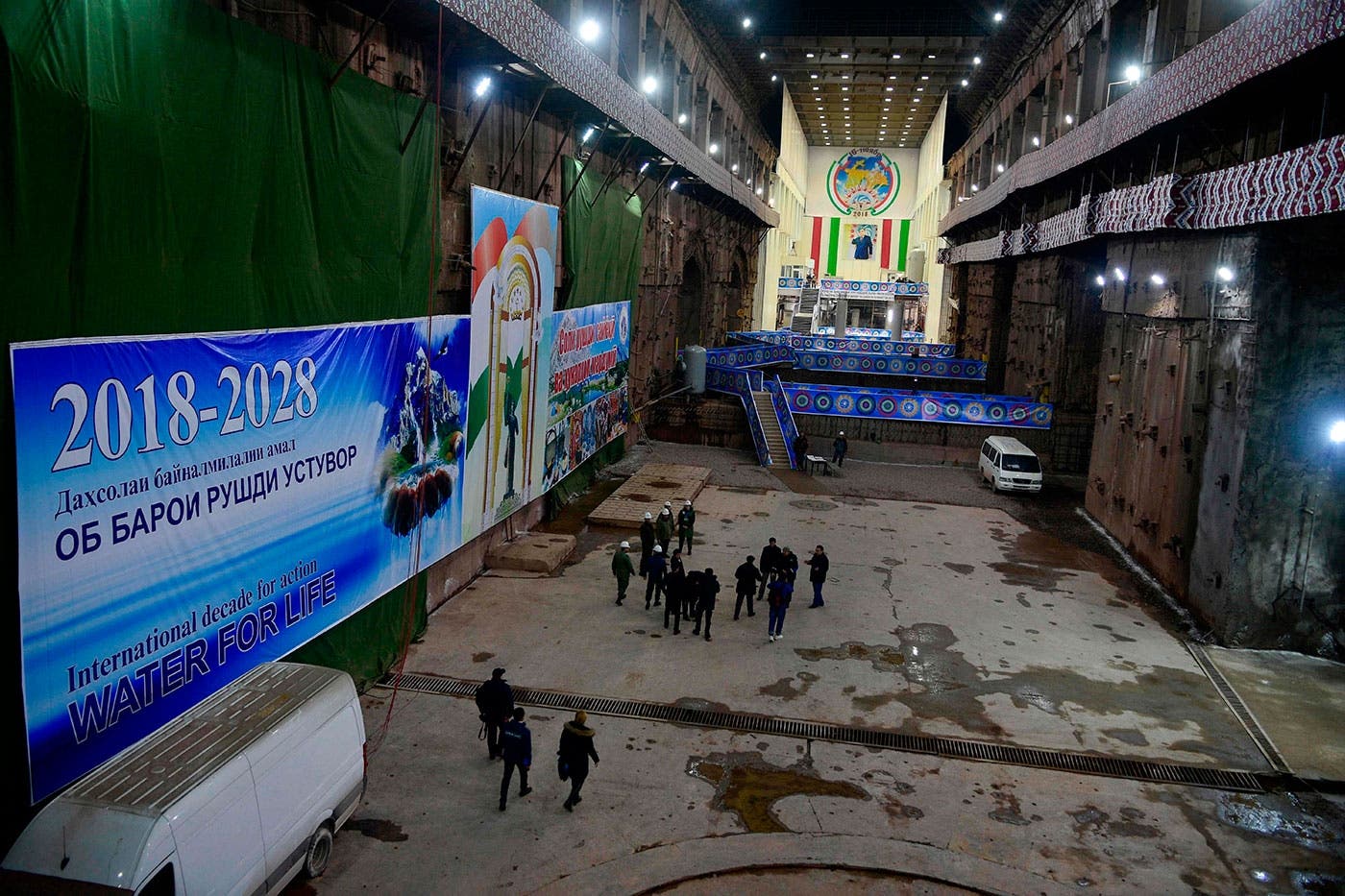 In an attempt to counter the electricity shortages in Tajikistan, the government has set its sights and political rhetoric on a dam project in the south of the country.

Initially conceived during the Soviet era with the dual purposes of managing water irrigation and hydroelectricity, the Rogun Dam was set to be the largest in the world.

The dam was under construction until the collapse of the Soviet Union in 1991. To make matters worse, a large section was destroyed in a flash flood in 1993, the same year it was expected that electricity would start to be produced.

Basic construction work was carried out over the intervening three decades before the cessation of all construction in August 2012. Fears over the effects of a large earthquake that might destroy the dam and flood large swathes of neighboring Uzbekistan led to a World Bank report. Meanwhile, Uzbekistan argues that the diversion of water supplies could lead to problems in cotton production.

The dam is being built with the help of the construction company We Build (previously known as Salini), an Italian firm involved in a number of large-scale projects around the world, including being the contractor for the controversial Grand Ethiopian Renaissance Dam (GERD) which is causing disagreements over water supplies between Egypt, Sudan, and Ethiopia.

Filippo Menga, Associate Professor in Human Geography at the University of Reading, told Al Bawaba that the international fallout over the project is based on numerous issues. “There are several points of contention. Irrigation water is one of them, but Uzbekistan is also concerned about a potential catastrophe in case of an earthquake, water releases in winter to generate hydroelectricity and the flooding that this would cause downstream, and also the fact that Tajikistan could use water as a strategic tool.

“Potentially, Rogun could be hugely beneficial for Tajikistan's energy sector (it will generate more than 3,000 MW of energy), and relations with Uzbekistan have been sour for decades, so I think they are willing to risk it, and indeed, they do not seem to be taking any steps to abandon the Rogun Dam venture.”

The rhetoric pushing forward the construction of the dam has reinforced an emerging sense of national identity in Tajikistan. As others have noted, the symbolism behind the reconstruction of a Tajik identity was created under President Emomali Rahmon, who has been in office since 1992, to work in conjunction with an Islamic identity (approximately 98% of the population are Muslims). The national flag is the same as the Iranian flag but in reverse, for example, and the green on the lower part of the flag refers to Islam.

“Mega-dams such as this one should not be the way forward."

The success of the Rogun Dam is essential for Rahmon to retain legitimacy in the eyes of the public. The knowledge that the dam is bigger than any other in the world, mirrored in the size of a flagpole constructed in the capital city of Dushanbe (then the tallest flagpole in the world), seeks to reinforce the sense of a rising national consciousness. A further element of this nationalism is the positioning of a Tajik identity in opposition to neighboring “rivals”, such as Uzbekistan.

On 14 October 2020, President Rahmon said that the Rogun Dam is “the bright future of Tajikistan” and “will play the main and key role in ensuring the country’s full energy security.”

However, Filippo Menga argues that the Rogun Dam will not solve all of Tajikistan’s power problems. “Mega-dams such as this one should not be the way forward. These are top-down projects that usually lead to a wide range of issues (resettlement of local populations, debt due to their huge cost, corruption, loss of biodiversity, CO2 emissions (yes, hydroelectricity is not as "green" as we might initially think) and many more). Rather, we should pursue smaller alternatives (small hydro for example), or other forms of renewable energy,” Menga told Al Bawaba.

“Or if we are to build mega-dams, they need to be really inclusive and anticipated by rigorous environmental and social impact assessments, which does not always happen,” he added.

The environmental element of the Rogun Dam was stressed by President Rahmon in October 2020. “Tajikistan possesses enormous hydropower resources and is one of the world’s largest green energy generators,” he told a crowd in Dushanbe.

The dam is often a source of pride for many Tajiks.

However, research has shown that the green credentials of hydroelectric power may be less impressive than commonly thought. Significant carbon emissions are produced during the construction and dismantling of large dams. Perhaps more surprising, though, is the emissions resulting from the decomposition of flora in dam basins.

The Union of Concerned Scientists estimates that the life-cycle emissions for hydroelectric power can be up to 0.5 pounds of carbon dioxide equivalent per kilowatt-hour, but this figure varies depending on the project. In comparison, natural as emits between 0.6 and 2 pounds per kilowatt-hour and coal-generated electricity between 1.4 ad 3.6 pounds.

Tajikistan and the wider region are climate-sensitive. US AID has predicted that a rise in temperatures of between 2 and 5 degrees (which they see as likely) will probably lead to a reduction in water available for drinking, agriculture, and electricity generation. The melting of permafrost in higher countries such as Tajikistan is also likely, leading to floods and changes in river flows.

Nevertheless, the dam is often a source of pride for many Tajiks. Two researchers who traveled around Tajikistan to garner views on the construction of the dam met a museum curator who was hosting an exhibition on the project.

“In her commentary on the exhibition, she reiterated the Soviet discourse of ‘taming the wild rivers.’ She also emphasized the exceptional status of the project, reminding us several times that it would be the “dam of the century,” the highest in the world, with the largest underground machine hall,” the researchers wrote in their report.

“As builders of this grand facility of the century,” Rahmon said in October, “you [Tajiks] must always remember that the fulfillment of the long-term dream of the country’s inhabitants and the ensuring a prosperous future of Tajikistan depends on your patriotic efforts and conscientious work.”

The Future of Hydropolitics

Tajikistan and Uzbekistan will continue to argue over the Rogun Dam. Nevertheless, the continued encroachment of nationalism over resources that do not recognize international borders will make it harder for both energy and water to reach people outside of capitals.

It is part of the nation-state’s peculiar nature that it is able to take a diplomatic conflict with another country and reconfigure it into fuel for exclusionary national identity. As the rhetoric between Tajikistan and Uzbekistan intensifies as the dam comes closer to construction, the difference between the cooperation of the Soviet period will become starker.

In the final days of the Second World War, Franklin D. Roosevelt held a meeting with Saudi King Abdul Aziz Ibn Saud onboard the USS Quincy. The US president assured the Saudi King, who was concerned with the plight of the Palestinians, that any actions taken would be done so in full consultation with both the Jews and the Arabs living in...

The explosion in Beirut last week was reportedly caused by the ignition of ammonium nitrate. But the events that led to blast can be traced back decades. Lebanon is at its most critical juncture since the end of the civil war. Corruption and economic mismanagement had bought the country to the precipice of economic catastrophe before the...

Soldiers of Misfortune: The Syrian Mercenaries Fighting on Both Sides of the Libyan Civil War