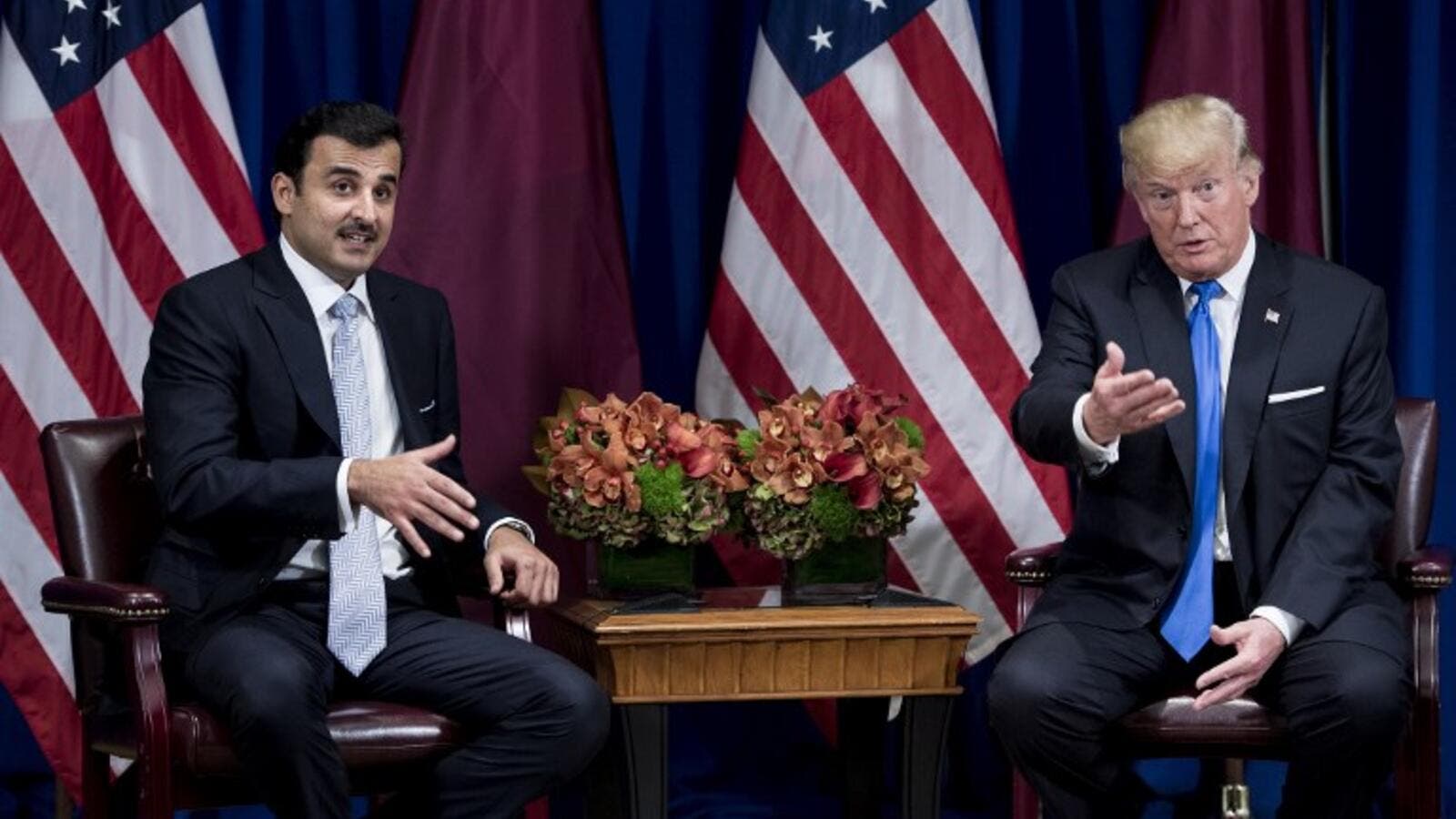 The leaders of the nations at the heart of the ongoing Gulf crisis are in New York for the UN General Assembly, and things are hotting up.

As every move is analyzed back in the Middle East, Saudi social media has picked up on one moment in particular.

A GIF of US President Trump seeming to change his mind about shaking the Qatari Emir’s hand during a Tuesday meeting between the pair has gone viral overnight.

Some compared it to the decidedly warmer relations between the Saudi leadership and Trump, here seen shaking the hand of Crown Prince Mohammed bin Salman.

Many on Twitter felt that moment of yesterday’s meeting between Trump and Sheikh Tamim bin Hamad Al Thani captured the essence of current relations between the two nations.

Certainly the Gulf leader was keen to take the opportunity to emphasize the US-Qatar military relationship. Qatar hosts al-Udeid base, the largest US military facility in the Middle East, and the two have typically been military allies.

His anxiety to play his cards right with Trump comes after the US president came out on the side of the boycotting nations early in the crisis.

So good to see the Saudi Arabia visit with the King and 50 countries already paying off. They said they would take a hard line on funding...

...extremism, and all reference was pointing to Qatar. Perhaps this will be the beginning of the end to the horror of terrorism!

Trump has since offered to act as a mediator in finding a solution to the crisis. Earlier this month, Saudi Arabia suspended any dialogue with Qatar after accusing Doha of “distorting facts” following reports of a breakthrough phone call between the pair.

Still, in his speech Tuesday at the UN, Trump made a veiled reference to the rhetoric of the boycotting countries.

“It is time,” he said. “To expose and hold responsible those countries who support and finance terror groups like al-Qaida, Hezbollah, the Taliban and others that slaughter innocent people.”

In his own speech, Sheikh Tamim renewed his call for “an unconditional dialogue based on mutual respect for sovereignty”.

"The countries who imposed the blockade on the State of Qatar interfere in the internal affairs of many countries, and accuse all those who oppose them domestically and abroad with terrorism. By doing they are inflicting damage on the war on terror,” he added.

"We have refused to yield to dictations by pressure and siege."

A battle of banners in NYC

As the war of words on Qatar raged at the UN General Assembly Tuesday, on the streets of “the Big Apple”, a battle of the banners reigned instead, as political talks spilled over into rival protests.

Images of an anti-Qatar protest held on Tuesday outside the General Assembly have been widely shared on social media, particularly by Saudi accounts.

Arab News, a Saudi paper with close links to the royal family, suggested that as many as “hundreds” took part in the demonstration. From pictures it is clear that at least dozens attended.

Claims that Doha funds terror organizations have been used as justification for the boycott of Qatar by four Arab nations. Saudi Arabia, UAE, Bahrain and Egypt all cut diplomatic ties with the tiny Gulf state on June 5 this year, later issuing a list of 13 demands that were rejected by Qatar.

A protest of the egyptian community in new York against the terrorism of Qatar#تنظيم_الحمدين #UNGA pic.twitter.com/xK2sKOhXph

The demonstration was attended by members of the Arab-American community, as well as “US organizations”, which formed a “group called the Independence Front” according to Arab News.

The world stands before the United Nations against #Qatar support for terrorism. #الأمم_المتحدة.#UNGA #UNGA72 #UAEatUNGA72 pic.twitter.com/kuAKoPlSiO

It was not just anti-Qatar protesters who have taken to NYC, however. Pro-Qatar pages have shared images of barriers apparently adorning buildings in the US city.

This manifestation of the Gulf Crisis in New York is a continuation of the media campaign that has been waged by both sides in the conflict.

The battle for public opinion has encompassed media outlets attached to the countries involved - in English, particularly Al Jazeera and Middle East Eye for Qatar, and Al Arabiya among others for Saudi Arabia - as well as the exploitation of social media.

Only yesterday Al Jazeera launched a hyperbolic documentary, “Abu Dhabi… Back Doors”, which accused the Emirates of funding a five-year “demonization campaign” against Qatar.