Published January 12th, 2022 - 07:41 GMT
A group of Afghan refugees gather outside the Indonesian government offices in Pekanbaru on January 11, 2022, to plea for resettlement to a third country. (Photo by Wahyudi / AFP)
Highlights
‘We have to pay our debt, either by paying money or by giving our child,’ says Siringul Musazey

A mother in western Afghanistan faces the prospect of having to hand over her 5-year-old daughter to a man if she can’t pay off a $1,500 debt left by her husband. 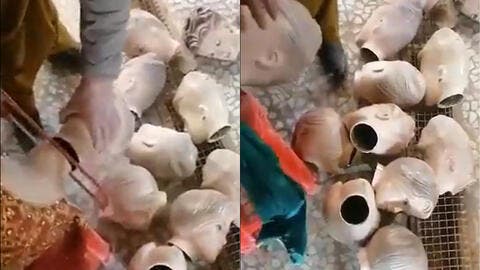 Siringul Musazey is trying to hold on to life with her seven children in a single-room tent in the Shahr Sabz region of Herat province.

With the departure of US-led NATO forces as of Aug. 31 last year and the Taliban's return to power in Afghanistan, sharp reductions in international aid have aggravated the dimensions of hunger and misery in the country.

Assuming the argument put forward were true then what on earth was NSA Mohib & Co doing? Pillaging national wealth!?

Their corruption is the reason why ordinary poor Afghans are having to sell their kids because they can't feed them. #Ashrafghani #AfghanistanCrisis https://t.co/74uPlUao0R

According to the UN, while half the country is having difficulty obtaining food, the number of families who want to sell their children to buy bread is increasing throughout the country.

Musazey spoke to Anadolu Agency about the financial problems she has.

Thousands of people live in the Shahr Sabz region who had to migrate to Herat from neighboring provinces such as Badghis, Farah, and Ghor due to a drought that has worsened over the last three to four years and conflicts between the Taliban and the previous government. Musazey and her family are among them.

If Musazey cannot pay off the $1,500 (157,810 Afghanis) debt left by her husband, she will have to give her daughter Saliha to the payee.

Struggle for survival in tent

Immigrating to the region from Badghis three years ago with her husband, five girls, and two boys, Musazey is now struggling to survive with her family in a tent that offers no protection from the cold and takes in water when it rains.

She and her children sleep at night under thick duvets, trying to avoid the danger of frostbite.

“It gets very cold in the evenings. My hands and arms hurt too. I am sick and cold,” she said.

The family, who does not even have a stove for heating, has almost nothing to eat. Generally, they eat dry bread with tea and have a cooking gas cylinder and a teapot, two thermoses, a few glasses, plates, and bowls as kitchen utensils.

Asked what they ate today, Musazey said: "Tea and a few pieces of dry bread. Yesterday we ate a few potatoes brought by the neighbors. We have nothing else to eat. We want to be helped."

She and her children can't even remember the last time they had a decent meal.

Musazey said her drug addict husband left them and she last saw him eight months ago.

She said that while living in Badghis, her husband borrowed $1,500 from an acquaintance, which she is unable to pay off.

"We have to pay our debt, either by paying money or by giving our child. We are in hunger as a family. We do not have any relatives who can help us. Everyone is poor. I have to give my child for my debt. Nobody helps us. I will either sell my daughter or give her in return for my debt."

13 Millions of Afghan children in humanitarian crisis, need of global assistance. Says save the children International Organisation.
At the same time the terrorists who occupy Afghanistan say,that Everything is going well in Afghanistan.@save_children @MajeedQarar pic.twitter.com/Cm3EURJ05r

The creditor, Khan Hazret, said he was in good financial condition before, and he loaned Musazey’s husband the money to meet his needs.

Noting that he is also poor and unable to earn his keep, Hazret said he wants to either collect the debt or marry Saliha to his 12-year-old son in return.

Girls being sold in Afghanistan

In starving Afghan families, boys are usually able to bring home a small amount of money by working in jobs such as shining shoes in the city or collecting plastic and paper from rubbish bins. However, some families want to "dispose of" their daughters because they cannot contribute financially to the household. As a result, the sale of young girls into marriage is common across the country.

Buyers can allow girls to stay with their families until they are 11-12 years old. When girls reach this age, they are forced to marry the buyers or their children.

Following the Taliban’s swift takeover of Afghanistan on Aug. 15 last year, aid to the country was cut off.

The country’s economy became unmanageable as a result. 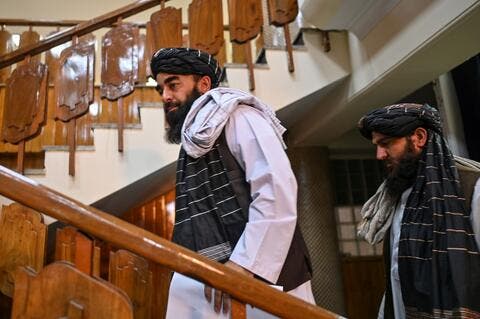 Unemployment, poverty, and hunger have reached alarming levels in Afghanistan.

The United Nations Food and Agriculture Organization (FAO) announced that the number of people facing acute food insecurity in Afghanistan is at least 18.8 million, which is expected to rise to 22.8 million during the winter months.