Afraid of The Bear? Sweden Applies For NATO 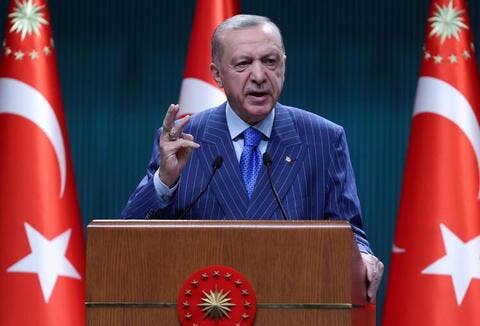 Turkey 'Will Not Say Yes' to NATO Membership For Sweden, Finland (AFP)

Linde, who signed the application for the NATO bid live at the Foreign Ministry, said that her feelings are high and that Sweden is doing its best.

She added that the application document will soon be delivered to NATO together with Finland.

On Monday, Swedish Prime Minister Magdalena Andersson announced the bid for the alliance following a meeting in the parliament.

For decades, Sweden and Finland took a neutral foreign policy posture in the region, but the ongoing Russia-Ukraine war that started on Feb. 24 triggered a shift in their approach, with both the public and most politicians favoring joining the NATO alliance.

However, Sweden and Finland, which have stated their intention to seek NATO membership, have not responded positively to requests from Turkiye -- a NATO member for over 70 years -- for the extradition of a total of 33 terrorists.

The PKK is listed as a terrorist group by the EU, but Turkiye has complained that many European countries tolerate its presence and allow it to recruit and sell drugs to fund its attacks.

On Monday, the Swedish Foreign Ministry said that senior representatives of Sweden and Finland are set to visit Turkiye in the coming days to hold official talks in Ankara to discuss NATO membership applications.