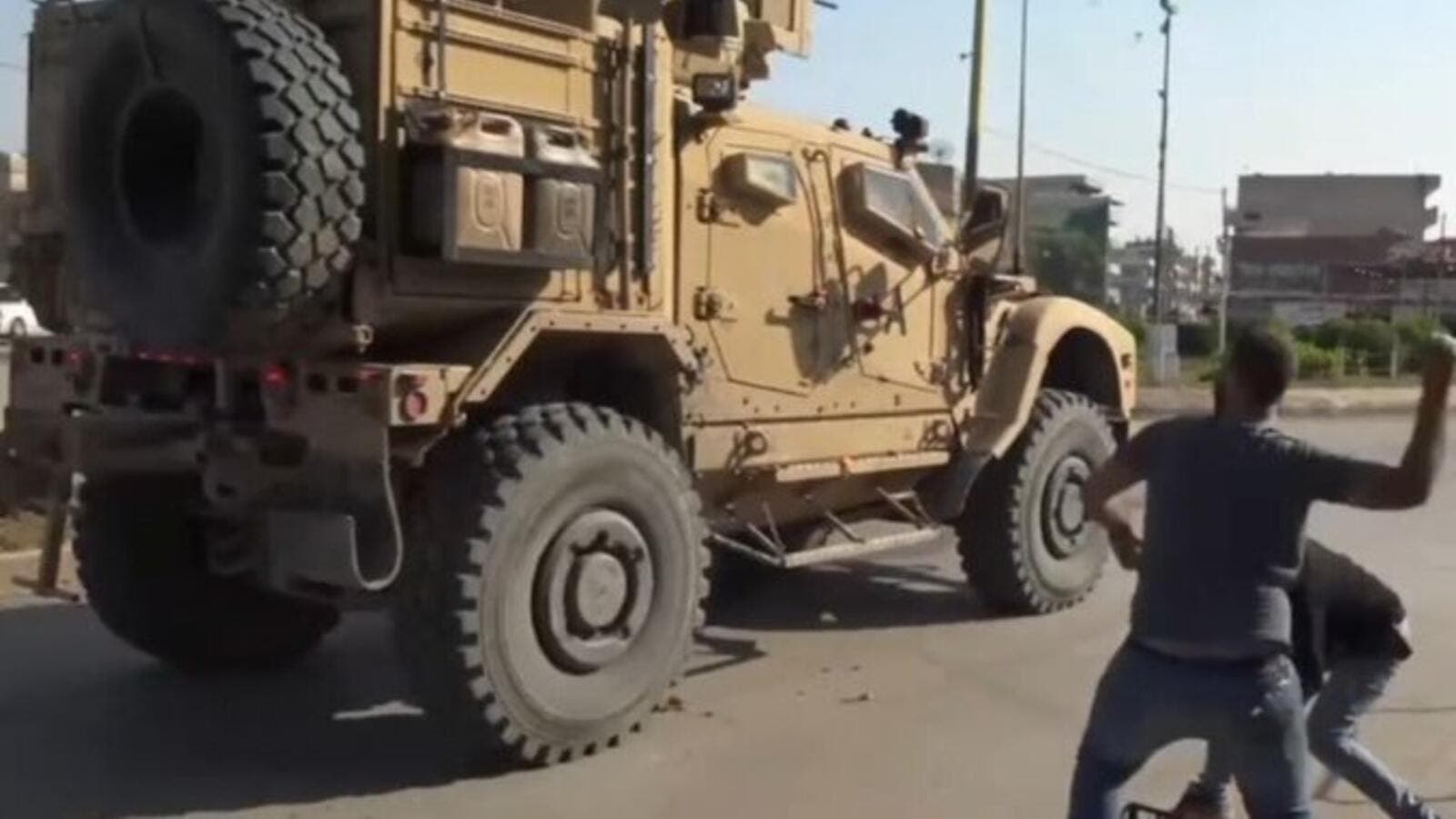 Angry Kurds block US troops (Twitter)
Highlights
Footage posted to Twitter yesterday shows a vehicle bearing the American flag struggling to make its way forward as several locals stand in front of it.

Angry Kurds have blocked US troops in the streets as they cross from Syria into Iraq in a display of hostility after Washington pulled the plug on their support.

US forces were filmed arriving in Erbil, the capital of Iraqi Kurdistan, in military vehicles.

But rather than receiving the heroes welcome from Kurds they once would have done, some of the outraged locals took to the middle of the road to block the oncoming vehicle.

The hostile scene comes after US troops were pelted with potatoes as they passed through a Syrian town on their way to Iraq on Monday.

It emerged yesterday that Washington may leave some forces in Syria to secure oilfields in the country's east. Between 200 and 300 U.S. troops will also remain at the southern Syrian outpost of Al-Tanf.

Footage posted to Twitter yesterday shows a vehicle bearing the American flag struggling to make its way forward as several locals stand in front of it.

One man even puts his hand on the front of the armored truck as it inches forward.

Many of the American troops who have been pulled from northern Syria have been redistributed to western Iraq, where the American military is set to continue fighting ISIS.

The footage of US troops receiving a hostile welcome from Iraqi Kurds comes after it emerged yesterday that US troops were pelted with potatoes as they passed through a Syrian town, as locals expressed their feelings of betrayal.

Footage shows armored vehicles passing through the city of Qamishli and residents shouting 'No America' and 'America liar,' in English. The clip then shows them throwing potatoes at the convoy.

The recent frosty scenes encapsulate the Kurds' feelings of betrayal and add a new indignity to an American withdrawal that has been rushed and saw several close brushes with Turkish-backed forces.

It emerged on Monday that the US may leave some forces in Syria to secure oilfields in the country's east and ensure they don't fall into the hands of a resurgent Islamic State.

Defense Secretary Mark Esper said the plan was still in the discussion phase and had not yet been presented to Trump, who has repeatedly said the Islamic State has been defeated.

Esper emphasized that the proposal to leave a small number of troops in eastern Syria was intended to give the president 'maneuver room' and wasn't final.

The Omar oil field lies in the eastern Deir ez-Zor Governorate near the country's border with Iraq, while the Suwayda oil field is located in Syria's northeast.

President Trump also told reporters at the White House Monday that the U.S. would 'work something out' with the Kurds in eastern Syria to ensure they have access to income from Syrian oil. He suggested sending an American oil company there to help.

Trump ordered the bulk of the approximately 1,000 U.S. troops in Syria to withdraw within weeks late on Saturday, after Turkish President Recep Tayyip Erdogan made it clear in a phone call that his forces were about to invade Syria to push back Kurdish forces that Turkey considers terrorists.

The pullout largely abandons America's Kurdish allies who have fought IS alongside U.S. troops for several years. Between 200 and 300 U.S. troops will remain at the southern Syrian outpost of Al-Tanf.