Arab Envoys Meet in The Israeli Desert But Where Are The Palestinians?

The top diplomats of the United States, Israel, and the four Arab nations of Bahrain, Egypt, Morocco, and the United Arab Emirates pledged Monday to foster stronger relations during a historic summit held in the Israeli desert. 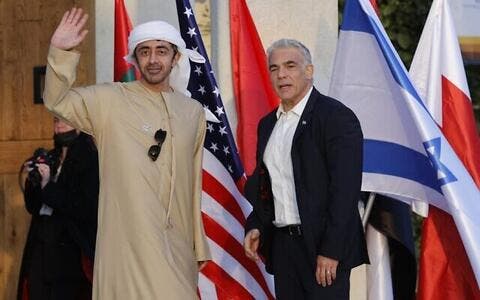 The so-called Negev Summit named after the desert in which it was held was an unprecedented two-day meeting between the foreign ministers of Israel and the Arab governments following Bahrain, Morocco and the UAE formalizing relations with Israel during the previous Trump administration.

The ministers all celebrated the meeting during a press conference Monday despite growing concerns over Washington seeking to revive a nuclear deal with Tehran and growing issues between Israel and the Palestinian Authority.

Let these words echo not just throughout Middle East but throughout the globe. Let the enemies of peace burn in their own hatred. pic.twitter.com/h0zn5bmfkb

Israel's foreign minister Yair Lapid said they had decided the night previous to make the summit an annual forum to which they would open its door "before all the peoples of the region, including the Palestinians, and offering them to replace the way of terror and destruction with shared future progress and success."

"What we are doing here is making history, building a new regional architecture based on progress, technology, religious tolerance, security and intelligence cooperation," he said. "This new architecture, the shared capabilities we are building, intimidates and deters our common enemies, first and foremost Iran and its proxies."

From this desert will spring forth palaces and temples, schools and hospitals, inspirational art and literature and groundbreaking technology. This meeting is the first of its kind, but not the last."

Blinken remarked that a few years ago this meeting would have been "impossible to imagine" but the normalization of their relationships through the Abraham Accords has seen growing ties between the nations in areas as diverse as tourism to aviation.

"The Abraham Accords are making the lives of people across your countries more peaceful, more prosperous, more vibrant, more integrated," he said. "They're allowing governments to focus their energies and attentions on issues that are actually affecting the lives of our citizens and making them better.

During those agreements during the Trump administration, issues concerning Palestinians were not addressed. However, they were at the forefront of the Negev Summit, with the Arab nations voicing support for a Palestinian state.

"Part of this process will be renewed efforts to resolve the Palestinian-Israeli conflict, and Bahrain continues to urge both parties to come together and negotiate a resolution that establishes a viable state for the Palestinians and protects the security and interests of all parties," Bahrain's foreign minister Abdullatif bin Rashid Al Zayani said.

Productive meeting with Palestinian Authority President Mahmoud Abbas today to reaffirm the importance of the U.S.-Palestinian relationship. The U.S. is committed to a two-state solution and the need to improve the quality of life for the Palestinian people. pic.twitter.com/IBrfvPAoft

Blinken also said that the regional peace agreements between the nations are not a substitute for progress for a solution to the Palestinian-Israeli conflict.

"This is a conversation we'll carry forward so that we can work toward our goal of Palestinians and Israelis enjoying equal measures of freedom, security, opportunity and dignity, and create the conditions for a negotiated two-state solution," he said.

As the foreign ministers were meeting in Israel, Jordan's King Abdullah II was meeting with Mahmoud Abbas, the president of the Palestinian Authority, and the two reaffirmed their relationship.

A statement from Abdullah's office makes no mention of the summit, but states that security and stability in the region cannot be achieved without a two-state solution.

Mohammad Shtayyeh, the prime minister of the Palestinian Authority, also chastised Israel amid the summit.

"Israel is ignoring the causes of our people, half of whom are under occupation and the other half in refugee camps, and in exile/diaspora," he tweeted. "Arab normalization meetings without ending the Israeli occupation of Palestine are just an illusion, a mirage and a free reward for Israel."

Its foreign ministry also published a statement Monday accusing Israel of committing crimes against its people while "boasting about the series of normalization meetings that are being held in a systematic Israeli attempt to skip the Palestinian issue ... in clear disregard for the importance of a solution to the Palestinian-Israeli conflict and a deliberate violation of the just and legitimate national rights of the Palestinian people."

Also amid the summit, two gunmen believed to be supporters of the Islamic State opened fire on police in the northern Israel city of Hadera. The two gunmen were killed by police, but not before the suspects killed two officers and injured several people.

All those in attendance for the meeting condemned the violence with Lapid saying it occurred in response to their summit.

"The terrorists' goal is to intimidate us, to make us afraid to meet and to build relationships and the agreements between us," he said, stating the attack was praised by Islamic Jihad and the Iran-backed Hamas terrorist group. "We have no intention of rewarding terrorists."

Blinken had met with Abbas on Sunday in the West Bank ahead of the summit and emphasized the United States' commitment to rebuilding its relations with the Palestinian Authority, including with giving it some $500 million in humanitarian assistance since April of last year.

"At the heart of all of this is an ongoing, enduring commitment to the basic principle of the two-state solution," he said during a press conference with Abbas. "Of course, the two sides are very far apart, so we'll continue our work, step by step, to try and bring them closer."