Published March 31st, 2022 - 09:55 GMT
In this file photo taken on March 20, 2021 a Malian soldier patrols the river bank in Konna as the Malian Prime Minister and his delegation visit the town in central Mali to attend the inauguration of the new river port, which was destroyed by bombing during the war in 2013. (Photo by MICHELE CATTANI / AFP)
Highlights
Soldiers patrolling in Bandiagara region were ambushed by unidentified persons, says military.

At least eight Malian soldiers were killed in an ambush in the Bandiagara region, the country’s military announced on Wednesday. 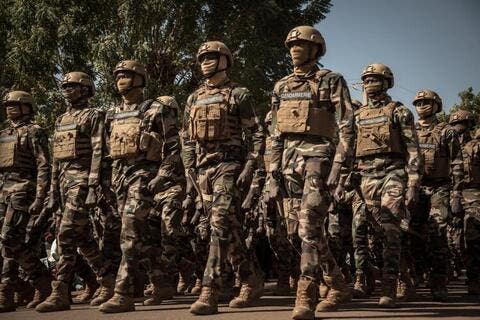 The Malian army said in a statement that the soldiers patrolling between the Songoiba and Yaokanda districts in the Bandiagara region were ambushed by unidentified persons.

Mali has been battling an insurgency linked to the Al-Qaeda and Daesh/ISIS terror groups since 2012, when unrest erupted in the north of the West African country.

The violence, which has killed thousands of civilians and troops, has also spread to neighboring Niger and Burkina Faso.