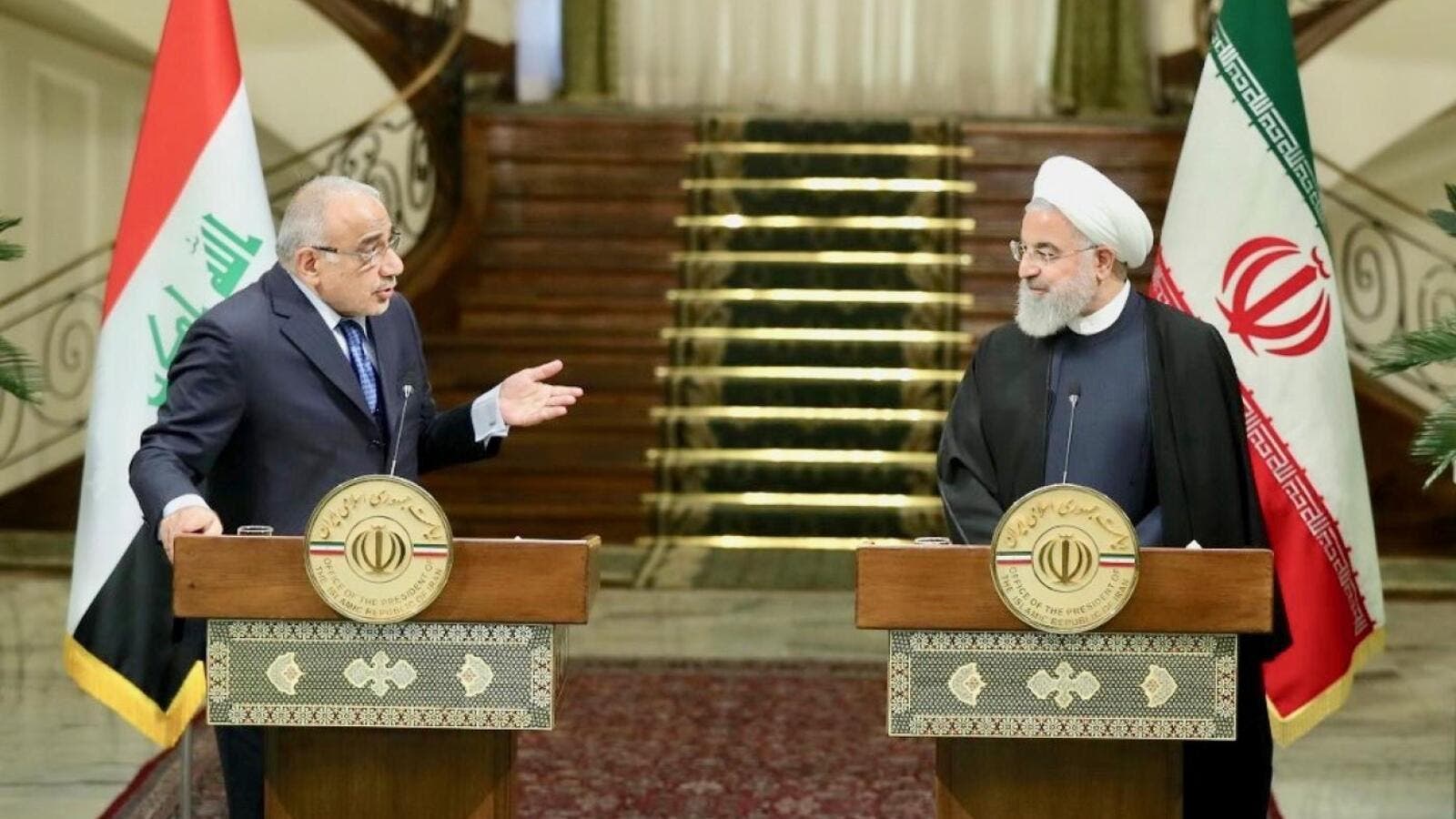 The 2014 Islamic State group [IS] crisis has affected Iraqi cities in different ways. Erbil, like much of the autonomous Kurdistan Region, was spared from the intense fighting, but there are signs of war and other recent conflicts all over the city.

A sizeable chunk of the population in the largely Assyrian Christian Ankawa suburb came to the area from the Nineveh Plains in 2014 when IS swept through the area. People from Baghdad escaped the chaos following the 2003 US invasion by coming to Erbil as well. Many are still here, despite Baghdad's improved security./'

Now, with US President Donald Trump dialling up the pressure on Iran, there are talks of a new war in Iraq, given Iraq's proximity to Iran and the presence of both Iran-backed militias and US forces in the country.

Delvo Alibek, from Ankawa, does not want this to happen.

"Of course, if there's a war, it will destroy Iraq," he told The New Arab. At the same time, he thinks that Iran is a cause of problems in Iraq.

"There's been no stability in Iraq since Iran came," he said. "It became sectarian."

Many Iraqis believe an American war against Iran would hurt Iraq, but remain deeply against Iran's policies in the country at the same time and want them to stop.

'Avoid the conflicts of Iran'

It is clear why many throughout the country do not want another war. There are currently 1.8 million people displaced in Iraq, according to UN figures. Most Yazidis have yet to return from camps in the Kurdistan Region to their home city of Sinjar, where slow rebuilding, few economic opportunities, mines and tensions between different armed groups persist.

The Old City of Mosul is still in ruins. The Islamic State group is still active in disputed Iraqi-Kurdish territories like Makhmour and Kirkuk.

On May 24, supporters of fiery Shia Muslim cleric Muqatada al-Sadr, a frequent critic of Iranian policy in Iraq, gathered in Baghdad to protest against Iraqi involvement in a US-Iran conflict. The Arabic-language hashtag "Iraq avoid the conflicts of Iran" was used frequently on Twitter on May 26.

Supporters of fiery Shia Muslim cleric Muqatada al-Sadr, a frequent critic of Iranian policy in Iraq, gathered in Baghdad to protest against Iraqi involvement in a US-Iran conflict
Alibek said he thinks Erbil would again be spared the worst of a war, but that other parts of the country would not be so lucky.

"The US and the Kurdistan Regional Government (KRG) are friends a bit more than the US and Baghdad," he said. "Baghdad would be destroyed. Here, maybe there would be a little bombing."

On May 19, a rocket landed near the US Embassy in Baghdad's Green Zone. Days earlier, the US removed all non-emergency personnel from the embassy and the consulate in Erbil, citing threats from Iran-backed groups. For months, Iraqi media has reported calls from the Popular Mobilization Units (PMU) for US troops to leave the country. Some of the largely Shia Muslim militias formed to fight IS are supported by Iran.

On May 24, Trump said the US would send 1,500 more troops to the Middle East to counter Iran. There are around 5,200 US troops in Iraq to help the country in its continued fight against IS.

Ahmad al-Ka'bi, from Basra, said he is against any further foreign interference in Iraq.

"My hope, of course, is non-escalation," he told The New Arab. "An arrival of an agreement that ends the crisis, I hope it results in the reduction of economic and international interventions in Iraqi affairs."

Criticism of Iran is not simply sectarianism. There are many critics in Iraq's Shia Muslim community as well. Protesters in the predominantly Shia Basra burned the Iranian consulate last summer during protests.

Many people throughout Iraq's diverse landscape are against Iran, but disagree on whether a US war against Iran would benefit Iraq.

In Baghdad, one student said Iran has not faced any pushback to its policies in the region.

"Iran has gone years without any real consequence to their antagonistic foreign policy," Karrar, who declined to give his last name, said.

Karrar said it is a "worry" that Iraq may get pulled into a US-Iran war, but that Iraq could actually gain more economic and political independence in such a scenario.

"Iraq will no longer import Iran's industrial waste and its own productions will bloom," he said. "Iraq will also breath from Iran's malicious involvement in Iraqs governance."

Supporters of Kurdish independence have clear grievances with Iran and are still angry over Iran's role via the PMU in the Kirkuk battle.

"For Kurds, it's important that next time Kurdistan moves for independence, no threats will be imposted by Iranian proxies to take lands of Kurds that they did back in October 2017," Lawk Ghafuri, a political analyst in Erbil, told The New Arab.

In October 2017, Iraqi forces, including PMU units, took Kirkuk from Kurdish forces following the Kurdistan independence referendum. Many Kurds regard the city as part of Kurdistan, while Turkmen residents and people elsewhere in Iraq want it to be under federal control.

Ghafuri said he hopes for a peaceful solution to the US-Iran tensions and a deal that includes Iran cutting ties with its regional proxies. An actual war would greatly damage the humanitarian and economic situation in the Kurdistan Region, according to him.

"Thousands or millions of refugees will flee from Iran into Kurdistan," he said. "Plus, KRG hugely depends on Turkey and Iran for trade and supply chains."

"I believe there will be some significant military intervention of some sort," he said. "If Iran is not going to be targeted directly, its assets will in other countries. Most likely Syria. But Iraq is also a possibility."

Some PMU groups and leaders have actually come out against a US-Iran conflict in Iraq. Leader of the Asaib Ahl al-Haq militia Qais al-Khazali tweeted: "The assumed war is not in the interests of the Islamic Republic of Iran, nor the US It's Israeli interests" following the Green Zone attack.

Kataib Hezbollah put out a statement after the incident that the pro-PMU network Aletejah tweeted saying: "Bombing in the Green Zone by a Katyusha missile is unjustified, its timing inappropriate, and doesn't serve the public interest."

On June 2, US Secretary of State Mike Pompeo said the US would be willing to negotiate with Iran without preconditions providing Iran behaves like a "normal nation." Iran dismissed this as "word-play."

Iraqi opinions are divided on the possibility of a war, and influenced by which media and social media people consume, according to one writer and media commentator from Baghdad.

"Most people espouse the view that the war will not happen," Diyari Salih told The New Arab.

Salih said some Shia channels are calling on people to prepare for war, while others are downplaying the possibility.

"The channels that represent the factions of the Hashd (PMU) that imitate (Iranian Ayatollah) Khameini allude to the public through dialogue programmes the need to mobilise and prepare for war," he said. "The rest of the Shia channels are convinced a war will not take place."

The smartest analyses are the cautionary ones, according to Salih.

"The few who think rationally about the war scenario believe it would have destructive economic and security effects on Iraq," he said. "They think it would increase ethnic and sectarian divisions. And that it would spread chaos and violence."

Iraq will no longer import Iran's industrial waste and its own productions will bloom... Iraq will also breath from Iran's malicious involvement in Iraqs governance
'They do not want war'

Iraqis and analysts of the country alike do not know whether there will actually be a war. Alibek said he does not expect actual fighting.

"I think they do not want war, Iran and the US," he said.

Karrar said war is plausible, however, and that it may entail targeting Iran's allies in Iraq and Syria.