As search crews comb through the debris of the collapsed condo building and officials dispatch engineers to similar structures in the area to make sure they are safe, President Joe Biden said Tuesday he will travel to Florida later this week to visit the site. 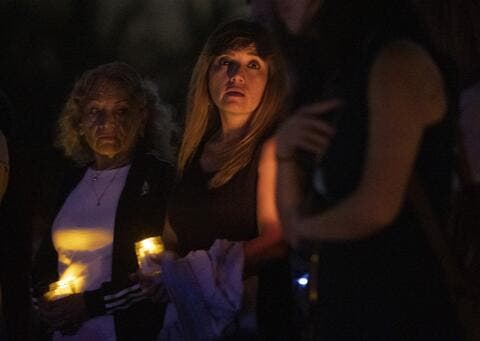 The White House announced that Biden and first lady Jill Biden will travel to Surfside on Thursday. The details of the visit weren't disclosed.

President Joe Biden "believes there should be an investigation" into why the building in Surfside, Florida, near Miami, collapsed, according to White House press secretary Jen Psaki. pic.twitter.com/dPU7Qwgb18

"My heart is with the community of Surfside as they grieve their lost loved ones," he tweeted last week after the collapse occurred.

"We are ready to provide assistance as needed by state and local officials."

Authorities on Monday night identified the final three people who are known to have died in the partial collapse of the Champlain Towers South in Surfside last Thursday. They are Marcus Joseph Guara, 52; Frank Kleiman, 55; and Michael David Altman, 50.

The other eight were previously identified. On Tuesday evening, Miami-Dade County Mayor Danielle Levine Cava told reporters during a press conference that another body had found during the day, lifting the death toll to 12 with more than 149 unaccounted for.

Another 125 people in the condo at the time of the collapse have been accounted for, she said, adding that the numbers have and will fluctuate as they receive information from multiple sources.

On Monday night, more than 200 people gathered in Surfside for a candlelight vigil to honor the victims of the disaster.

"They were able to just kind of feel like they were closer to their family members," Miami-Dade Fire Rescue paramedic Maggie Castro said, according to WPLG-TV. "For some of them, they saw what they needed to see to perhaps start processing the information that has been difficult to accept up to this point."

The cause of the collapse was under investigation, but there have been concerns about the structural integrity of the condo building in recent years. According to city documents, a 2018 field survey detailed $9.1 million in repairs that were needed for the building and noted "major structural damage" to the concrete structural slab beneath the pool deck and entrance drive.

The survey warned that concrete deterioration would "expand exponentially" unless the waterproofing was replaced, noted signs of stress in the parking garage and found "abundant cracking and spalling of varying degrees" in concrete columns, beams and walls. It also noted flooding and corrosion.

The Miami Herald on Monday published photos from a local pool contractor that showed structural damage in the parking garage of the Champlain Towers South less than two days before the collapse. He told the newspaper that he noted standing water throughout the garage, cracking concrete and corroded rebar under the pool.

The president of the Champlain Towers South Condominium Association, Jean Wodnicki, said in an April letter to residents obtained by USA Today that damage to the building's basement garage had "gotten significantly worse" since the 2018 inspection and that the building's concrete was deteriorating at an accelerated rate.

"When you visually see the concrete spalling (cracking), that means that the rebar holding it together is rusting and deteriorating beneath the surface," Wodnicki said.

Wodnicki said she sent the letter in an effort to help residents understand why the cost of assessments to repair the damages would be as high as $15.5 million, noting that the condition of the building's roof had also become "much worse," repairs to the basement's pool deck area would be costly and that "it is impossible to know the extent of the damage to the underlying rebar until the concrete is opened up" when performing concrete restoration work.

Jay Miller, a Champlain Towers South resident, told USA Today that residents were aware of the damage and voted to make fixes but a 2018 price tag of $7 million gave the condo's association's board pause. He added that a new board of "extremely dedicated and conscientious people" later took over but they lost valuable time to make the repairs.

A third lawsuit alleging the condo association was partly responsible for the collapse by ignoring the long-needed repairs provided a look into the scene.

Raysa Rodriguez, a retired postal worker who lived in the building for 17 years said in the lawsuit that the building "swayed like a piece of paper" and that she was hit by "a wall of dust" as she ran to the balcony.

"I looked to the north end of the building. A concrete column had pierced the hallway from floor to ceiling. I looked at the elevators. The elevator shafts were exposed, the doors were gone," Rodriguez wrote.

Rodriguez said she "screamed in horror" as she witnessed the scene and heard people pleading for help as she and other neighbors escaped the building.

Monday night, officials in nearby Miami Beach decided to send structural engineers to buildings in the city that are undergoing a 40-year recertification process. The condo tower, built in 1981, had been undergoing the same process before it collapsed.

One Miami Beach official said more than 500 buildings are due for the recertification process.

US President @JoeBiden said he may travel to #Florida as early as Thursday after a building collapse near #Miami killed at least 11 people.https://t.co/KpTEDjXgfd

As a result of the Surfside collapse, the U.S. State Department has started expediting visas for victims' relatives and survivors. At least three dozen nationals from Colombia, Venezuela, Uruguay, Cuba, Chile, Paraguay and Argentina are listed among the missing. One is the sister of Paraguay's first lady.

The Miami Marlins Major League Baseball franchise has created a relief fund that will provide donations to help victims and survivors of the collapse. 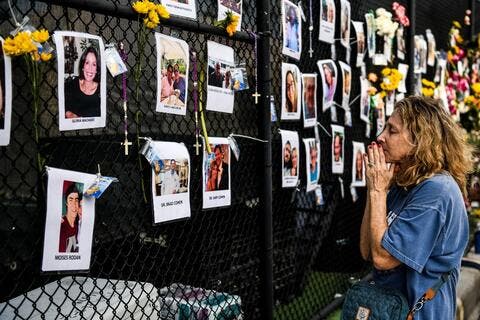 "Our community remains saddened by the horrific tragedy last week in Surfside and the terrible loss that our neighbors have endured," Sherman and Marlins CEO Derek Jeter said in a joint statement.

"The grief and lasting sorrow from this incident will be difficult to overcome, but our hope is that these funds can assist those directly impacted."