The massive container ship blocking the busy Suez Canal has been freed from the bank of the vital trade route in a last-ditch bid to take advantage of the king tide brought on by the supermoon.

The Ever Given was freed by salvage teams early on Monday, one week after after the 1,300-foot-long ship ran aground and choked off global trade, according to maritime services provider Inchcape.

'The MV Ever Given was successfully re-floated at 04:30,' Inchcape said in a tweet. 'She is being secured at the moment. More information about next steps will follow once they are known.'

Video from the canal shows a fleet of tugboats alongside the re-floated Ever Given, blowing their foghorns in a chorus of celebration.

It was not immediately clear how long it would take to reopen the Suez Canal to traffic, or to clear the backlog of hundreds of ships awaiting transit.

Satellite data from MarineTraffic.com showed the ship in much the same position, surrounded by a squadron of tugboats with its bow pointed toward the canal's eastern bank.

Officials said the operation made use the high tides created by the full moon to dislodge the 220,000-ton skyscraper-sized Ever Given, which has been wedged across the crucial waterway in Egypt since Tuesday.

The rescue efforts came as Egypt's President Abdel Fattah Al-Sisi ramped up efforts to unblock the single-lane stretch and ordered preparations for the possible removal of some of the ship's 18,300 containers if dislodging efforts failed.

The Suez Canal Authority (SCA) confirmed the process of unloading the cargo would have gone forward if efforts to dislodge the ship failed, while SCA Chairman Osama Rabie said any operation to lighten the ship's load would not start before Monday.

This weekend saw a so-called 'supermoon' full moon, which provided higher tidal maximums than usual due to its gravitational pull on the earth's surface.

As the high tides came in last night, diggers set to work removing parts of the canal's bank and expanded dredging close to the ship's bow to a depth of 59ft (18m) but the large ship remained entrenched in the waterway, the Suez Canal Authority said in a statement.

'Further attempts to re-float the vessel will continue this evening once the tug is safely in position along with the 11 tugs already on site,' the SCA said in a statement.

It came soon after rescue crews desperately trying to free the container ship today said they had made a breakthrough and had managed to move the skyscraper-sized vessel by nearly 100ft.

The vessel, which carries cargo between Asia and Europe, disrupted global shipping valued at more than £6.5billion per day, exacerbating the global economic crisis triggered by Covid-19.

However, in a major breakthrough on Sunday, rescue crews told NBC News foreign correspondent Raf Sanchez they have managed to move the enormous carrier by around 98ft (30m) after deploying two tugboats.

The Dutch-flagged Alp Guard and the Italian-flagged Carlo Magno, which were called in to work alongside tugboats already on scene, reached the Red Sea near the city of Suez earlier today.

They helped nudge the Ever Given as dredgers continued to vacuum up sand from underneath the vessel and mud caked to its port side. They shifted at least 27,000 cubic metres of sand around the ship to reach a depth of 60ft (18m) , the authority said in a statement.

Workers planned to make two attempts on Sunday to free the vessel coinciding with high tides helped by a full moon on Sunday night, a top pilot with the canal authority said.

'Sunday is very critical,' the pilot told the Associated Press. 'It will determine the next step, which highly likely involves at least the partial offloading of the vessel.

Taking containers off the ship likely would have added even more days to the canal's closure, and required special equipment that wouldn't have arrived until later in the week.

This weekend it was revealed that ships containing livestock and IKEA furnishings had been left stranded in the  maritime traffic jam.

Gerit Weidinger, EU coordinator for NGO Animals International, told The Guardian: 'My greatest fear is that animals run out of food and water and they get stuck on the ships because they cannot be unloaded somewhere else for paperwork reasons.'

Meanwhile IKEA said it had 110 containers on the stricken Ever Given and on other ships.

'The blockage of the Suez Canal is an additional constraint to an already challenging and volatile situation for global supply chains brought on by the pandemic,' an IKEA spokesperson said.

On Saturday, the head of the Suez Canal Authority told journalists that strong winds were 'not the only cause' for the Ever Given running aground, appearing to push back against conflicting assessments offered by others.

Lt. Gen. Osama Rabei said that an investigation was ongoing but did not rule out human or technical error.

Bernhard Schulte Shipmanagement maintains that their 'initial investigations rule out any mechanical or engine failure as a cause of the grounding.'

However, at least one initial report suggested a 'blackout' struck the hulking vessel, which is carrying some 20,000 containers, at the time of the incident.

Asked about when they expected to free the vessel and reopen the canal, he said: 'I can't say because I do not know.'

Shoei Kisen Kaisha Ltd., the company that owns the vessel, earlier said it was considering removing containers if other refloating efforts failed.

On Friday, Peter Berdowski, CEO of Boskalis, the salvage firm hired to extract the Ever Given, said that the company hoped to pull the container ship free within days using a combination of heavy tugboats, dredging and high tides.

Berdowski told the Dutch current affairs show Nieuwsuur that the front of the ship is stuck in sandy clay, but the rear 'has not been completely pushed into the clay and that is positive because you can use the rear end to pull it free'.

Berdowski said two large tugboats were on their way to the canal and are expected to arrive over the weekend.

'The combination of the (tug) boats we will have there, more ground dredged away and the high tide, we hope that will be enough to get the ship free somewhere early next week,' he said.

The Ever Given is wedged about 6 kilometers (3.7 miles) north of the canal's Red Sea entrance near the city of Suez.

A prolonged closure of the crucial waterway would cause delays in the global shipping chain. 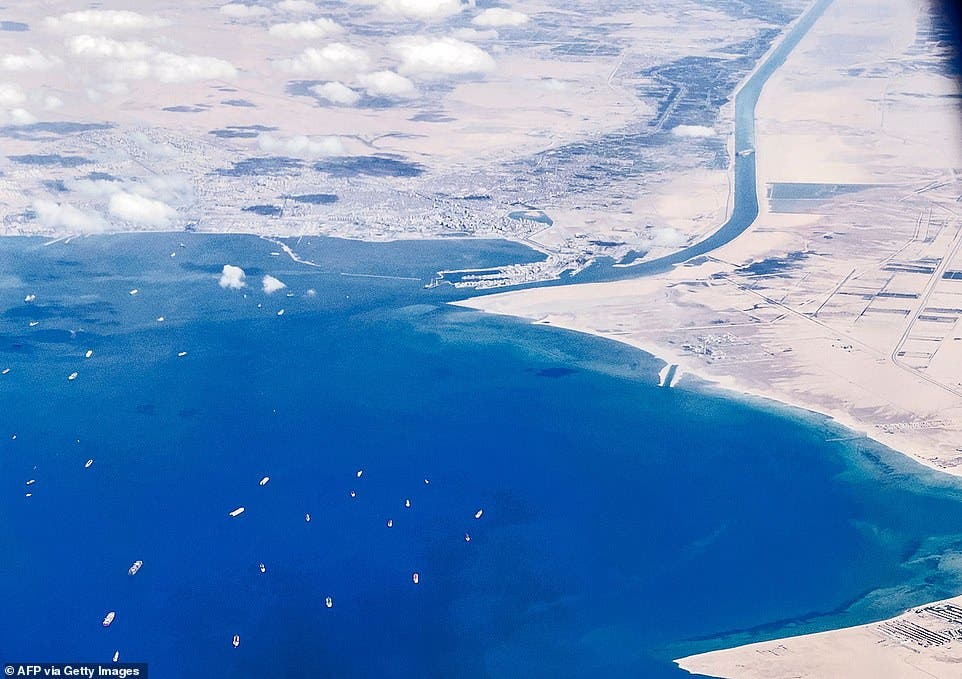 The closure could affect oil and gas shipments to Europe from the Middle East. Syria has already begun rationing the domestic distribution of fuel.

The country, which has been mired in a bloody civil war since 2011, faces a severe economic crisis. In March, it announced a more than 50 per cent rise in the price of petrol.

As of early Sunday, more than 320 ships were waiting to travel through the Suez, either to the Mediterranean or the Red Sea, according to canal services firm Leth Agencies.

Dozens of others still listed their destination as the canal, though shippers increasingly appear to be avoiding the passage.

The world's biggest shipping company, Denmark's A.P. Moller-Maersk, warned its customers that it would take anywhere from three to six days to clear the backlog of vessels at the canal.

The firm and its partners already have 22 ships waiting there.

'The current number [of] redirected Maersk and partner vessels is 14 and expected to rise as we assess the salvage efforts along with network capacity and fuel on our vessels currently en route to Suez,' the shipper said.

Mediterranean Shipping Co., the world's second-largest, said it had already rerouted at least 11 ships around Africa's Cape of Good Hope to avoid the canal.

It turned back two others, and said it expected 'some missed sailings as a result of this incident.'

'MSC expects this incident to have a very significant impact on the movement of containerized goods, disrupting supply chains beyond the existing challenges posed by the COVID-19 pandemic,' it said.

Startup of the Week: A Glimpse of Hope To the Visually-Impaired